Is Our Childrens Learning? - Global One TV - StumbleUpon 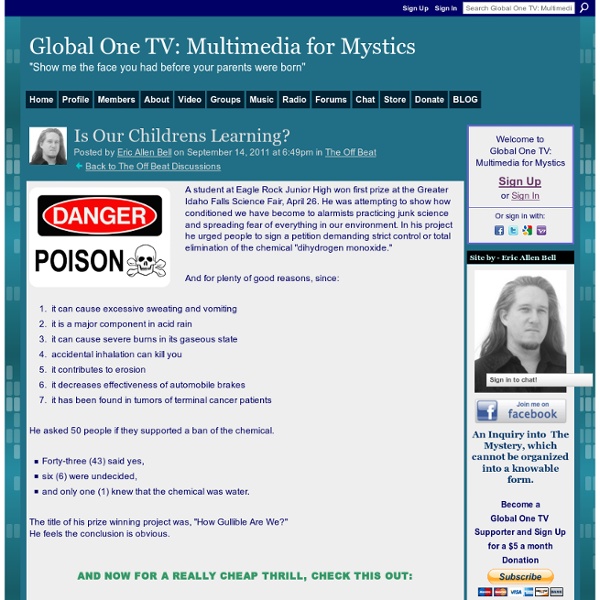 It is possible to understand Engineers - Where theres a will, theres a way. - StumbleUpon Understanding Engineers #1 Two engineering students were biking across a university campus when one said, "Where did you get such a great bike?" The second engineer replied, "Well, I was walking along yesterday, minding my own business, when a beautiful woman rode up on this bike, threw it to the ground, took off all her clothes and said, "Take what you want." The first engineer nodded approvingly and said, "Good choice, The clothes probably wouldn't have fit you anyway."

8 Things Everybody Ought to Know About Concentrating - StumbleUpon “Music helps me concentrate,” Mike said to me glancing briefly over his shoulder. Mike was in his room writing a paper for his U.S. History class. On his desk next to his computer sat crunched Red Bulls, empty Gatorade bottles, some extra pocket change and scattered pieces of paper. In the pocket of his sweat pants rested a blaring iPod with a chord that dangled near the floor, almost touching against his Adidas sandals. On his computer sat even more stray objects than his surrounding environment.

7 Lessons From 7 Great Minds Have you ever wished you could go back in time and have a conversation with one of the greatest minds in history? Well, you can’t sorry, they’re dead. Unless of course you’re clairaudient, be my guest. But for the rest of us, we can still refer to the words they left behind. 17 Commencement Speeches By Awesome Comedians As the spring semester draws to a close, college seniors everywhere are not only getting ready for their last final exams, but are also preparing to enter the intimidating world of adulthood. But if there is one bright spot in the dwindling days of college life, it's commencement day. You can finally get your hands on that hard-earned degree, take pictures with all your friends and family and, if you're lucky, maybe even hear a commencement address from a hilarious comedian. Some of the funniest people in the world have visited college graduation ceremonies to deliver the keynote address.

The Internet Is Ruining Your Brain [INFOGRAPHIC] Admit it: As you're reading this, you have tunnel vision — that feeling that the world is closing in on you after surfing the Internet for eight straight hours. Web dead head (yes, I made that up) is a growing concern for today's connected generation, which collectively spends 35 billion hours on the Internet every month. But we're not just talking one online shopping experience at a time. Often, we have four tabs open, cycling between emails and shopping, tweeting and word processing. Such multi-tasking actually raises stress levels and lowers creative thinking overall, according to the research compiled by ForensicPsychology.net.

One man's soap nightmare This is so funny I actually cried when I read it. It's an exchange between a guy staying in a London hotel and the staff of the hotel. The letters were sent to The Sunday Times. Dear Maid,Please do not leave any more of those little bars of soap in my bathroom since I have brought my own bath-sized Imperial Leather. SARCASM IN RELATIONSHIPS Sarcasm – a mocking or ironic remark (American Heritage Dictionary) Irony – the use of words to convey the opposite of their literal meaning (American Heritage Dictionary)

How to win Rock-paper-scissors every time I admit it. When I first heard there are actual tournaments for Rock-paper-scissors, sanctioned by the World Rock Paper Scissors Society, I laughed. I mean seriously, $50k to the winner of a game that requires no skill whatsoever? Absurd. Boy was I wrong. Rock-paper-scissors isn't just a silly game kids play or a way to decide who has to be the designated driver at parties.