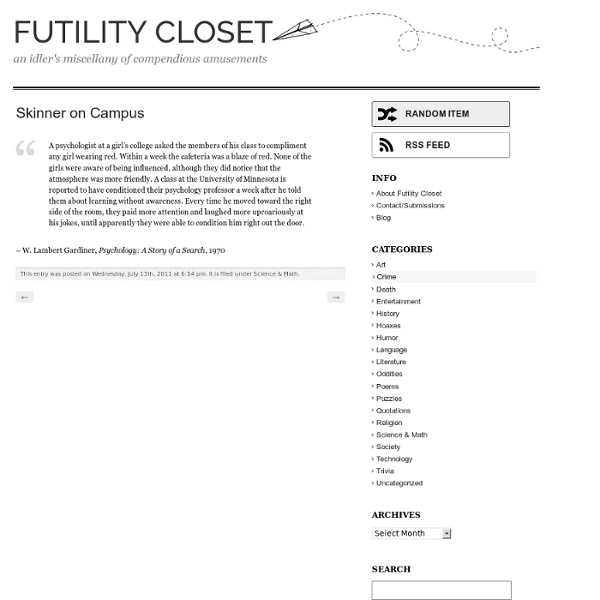 Blog : Test Your “Subitizing” Ability Recently I found myself reading about “subitizing”, which is the process of instinctively counting small sets of items in a fraction of second. For example, try quickly counting a few of these: The Wikipedia article indicates that you can nearly always correctly count four or fewer items in a small fraction of a second. Above four, you start to make mistakes. I wanted to test this claim in Mathematica (using myself as the test subject). Making Mouse Memories In the movie Eternal Sunshine of the Spotless Mind, scientists erase troubling memories from Jim Carrey’s head. In real life, scientists have done the opposite. By reactivating certain nerve cells, researchers make artificial memories pop into mice’s heads. The results, published in the March 23 Science and online March 22 in Nature, offer a deeper understanding of how the brain creates and uses memories. Much of what scientists know about how the brain remembers comes from studies that look for signs of natural memories in the brain or that disrupt memories. In the new work, memories are actually created, says neuroscientist Richard Morris of the University of Edinburgh in Scotland.

The Sakawa Boys - Motherboard While Nigeria’s 401 scammers may have written the book on West African internet fraud, their shtick looks like Compuserve compared to what’s going on in Ghana. Unsatisfied with the meager winnings from emailing thousands of random Westerners in hopes of convincing one poor sap they’re the treasurer of the Ivory Coast, Ghana’s scammers decided to stack the odds in their favor the old-fashioned way—witchcraft. Taking a page from cyberpunk, traditional West African Juju priests adapted their services to the needs of the information age and started leading down-on-their-luck internet scammers through strange and costly rituals designed to increase their powers of persuasion and make their emails irresistible to greedy Americans. And so “Sakawa” was born.

thinking styles The following is edited and adapted from It is intended to supplement personal understanding and enhance critical self-examination of yourself as a communicator. Styles of Thinking "How do people think about things?" Harrison and Bramson, through their research detailed in their text The Art of Thinking, found that in Western society there are five distinct styles of thinking. 5 Psych Experiments That Sounded Fun (Until They Started) So you see an ad in the paper from a lab looking for test subjects. They say they want to study the effects of getting high, or eating too much, or having sex. Oh, and they'll pay you to do all of those things. Preposterous, right? Got to be a setup for some kind of elaborate prank. But, these experiments were very real, and all of them proved with science that it's horrifyingly possible to have too much of a good thing.

Revenge of the Introvert There are as many introverts as extraverts, but you'd never know it by looking around. Introverts would rather be entertained by what's going on in their heads than in seeking happiness. Their big challenge is not to feel like outsiders in their own culture. by Laurie Helgoe, Ph.D. After ten years as a psychologist practicing psychodynamic psychotherapy , I reclined on the couch of my own analyst feeling burdened by my chosen work. After a day of seeing patients, I was drained.

Ten Amazing Things You Can Do With Coconut Oil - Health - GOOD If you've read No More Dirty Looks, or our blog, you know my co-author Alexandra and I are fond of oils, and coconut oil in particular because it’s an amazing and cost-saving multitasker that has lots of qualities to recommend it. It’s a rich moisturizer, it’s cheap, it’s versatile, it’s antimicrobial, antifungal, and antibacterial, has a decent amount of antioxidants, and it smells like baked goods. What’s not to love? Top 10 Things That Determine Happiness photo: meddygarnet Happiness is, by nature, a subjective quality with a definition like a moving target. There is scant evidence — qualitative or quantitative — to lend convincing support to those life variables most critical in determining individual happiness, which is likely why past researchers committed to the scientific method rarely tried to tackle the subject. This is changing. Take, for example, the World Database of Happiness in Rotterdam, self-described as a, “continuous register of scientific research on subjective appreciation of life.” Also, take the positive psychologists, a movement whose “members” perform scientific research into the nature of happiness and who published Character Strengths and Virtues: A Handbook and Classification, an 800-page behemoth that outlines all the characteristics, behaviors and conditions that lead to happiness.

Freud's *The Interpretation of Dreams* Chapter 1, Section D Back to Psych Web Home Page Back to The Interpretation of Dreams Table of Contents D. Superstitions – Where Do They Come From? “When you believe in things that you don’t understand Then you suffer… Superstition ain’t the way…” – Lyrics from “Superstition” by Stevie Wonder You are an intelligent, rational person on your way to work when a black cat dashes across the street in front of your car. Do you get an uncomfortable feeling of impending doom? While shaving or applying makeup, you accidentally drop the mirror and break it. Does the anguish of enduring seven years of bad luck overtake you? Have you spilled some salt?