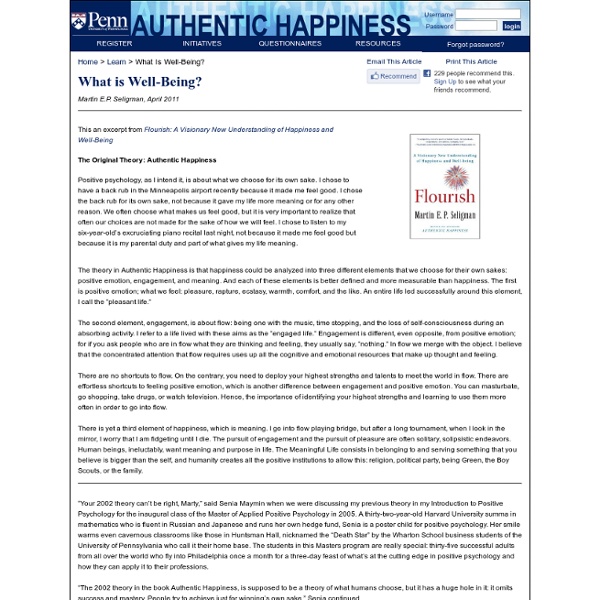 The theory in Authentic Happiness is that happiness could be analyzed into three different elements that we choose for their own sakes: positive emotion, engagement, and meaning. And each of these elements is better defined and more measurable than happiness. The first is positive emotion; what we feel: pleasure, rapture, ecstasy, warmth, comfort, and the like. An entire life led successfully around this element, I call the “pleasant life.” The second element, engagement, is about flow: being one with the music, time stopping, and the loss of self-consciousness during an absorbing activity. There are no shortcuts to flow. There is yet a third element of happiness, which is meaning. “Your 2002 theory can’t be right, Marty,” said Senia Maymin when we were discussing my previous theory in my Introduction to Positive Psychology for the inaugural class of the Master of Applied Positive Psychology in 2005. This was the moment I began to rethink happiness. Summary of Well-Being Theory

Dawn French: 'I decided I'd pretend to be someone very confident' | From the Observer | The Observer Dawn French: 'I'm a kid in the dressing-up box at heart.' Photograph: Martin Godwin for the Observer Why are you in Australia? You were supposed to have settled in Cornwall for the rest of your days. For my sins and my guilty pleasure I am a judge on Australia's Got Talent, alongside tiny little bambi Geri Halliwell. It's an honest, open kind of competition and I thought, I'll give it a go. That is an interesting honeymoon… It is extraordinary. Do you genuinely like reality talent shows? Oh yes. Did you go through anything like that process in your early days? No. What do people think of you in Australia? They love The Vicar of Dibley. Both your novels have been bestsellers. I am a kid in the dressing-up box at heart. The second novel, Oh Dear Silvia, is out now in paperback. I think you earn big laughs in something truthful if it has tragedy also. A lot of the book is written in accents, which are supposed to be so difficult to write. It's based on people I know or mixtures of people.

Money <em>can</em> buy happiness… if you spend it on other people | Not Exactly Rocket Science “This planet has – or rather had – a problem, which was this: most of the people living on it were unhappy for pretty much of the time. Many solutions were suggested for this problem, but most of these were largely concerned with the movements of small green pieces of paper, which is odd because on the whole it wasn’t the small green pieces of paper that were unhappy.” – Douglas Adams In this pithy paragraph, the sorely missed Douglas Adams sums up a puzzling paradox of modern life – we often link happiness to money and the spending of it, even though both proverbs and psychological surveys suggest that the two are unrelated. Across and within countries, income has an incredibly weak effect on happiness once people have enough to secure basic needs and standards of living. Once people are lifted out of abject poverty and thrown into the middle class, any extra earnings do little to improve their joie de vivre. I can’t get no… satisfcation Hey big spender There is a silver lining then.

Happiness & Health - Chronic Disease Prevention - Harvard Public Health Magazine [ Winter 2011] Could a sunny outlook mean fewer colds and less heart disease? Do hope and curiosity somehow protect against hypertension, diabetes, and respiratory tract infections? Do happier people live longer—and, if so, why? These are the kinds of questions that researchers are asking as they explore a new—and sometimes controversial—avenue of public health: documenting and understanding the link between positive emotions and good health. A vast scientific literature has detailed how negative emotions harm the body. Jack P. Focusing on the positive “But negative emotions are only one-half of the equation,” says Laura Kubzansky, HSPH associate professor of society, human development, and health. Kubzansky is at the forefront of such research. Among dozens of published papers, Kubzansky has shown that children who are able to stay focused on a task and have a more positive outlook at age 7 report better general health and fewer illnesses 30 years later. State of mind=state of body

Unstuck iPad app - How to live better every day – Unstuck Thinking vs. Feeling: The Psychology of Advertising Do ads with facts work better than ads that appeal through emotion and aspiration? Shutterstock Imagine two commercials for a new light beer. The first ad begins with a super-zoom of the luxurious, golden liquid tumbling into a tall clear glass. There is a man's voice: "All of the taste you want in a rich beer. Only half the calories." The second ad starts in a bar. You can probably guess where I'm going here. So what does science really know about advertising? Here's a good example from Clay Warren, director of the Communications Program at George Washington University. The literature on rational versus affective advertising is very long and mostly inconclusive. If this sounds basically intuitive, then good. The most successful ads -- in the eyes of advertisers at least -- have broad emotional and cognitive appeal. "In 2004, Goody, Silverstein & Partners, developed what would be a "Campaign of the Year" for Hewlett Packard's digital photography," he wrote in an email.

Happiness 1. The meanings of ‘happiness’ 1.1 Two senses of ‘happiness’ What is happiness? Philosophers who write about “happiness” typically take their subject matter to be either of two things, each corresponding to a different sense of the term: A state of mind A life that goes well for the person leading it In the first case our concern is simply a psychological matter. Having answered that question, a further question arises: how valuable is this mental state? In the second case, our subject matter is a kind of value, namely what philosophers nowadays tend to call prudential value—or, more commonly, well-being, welfare, utility or flourishing. Importantly, to ascribe happiness in the well-being sense is to make a value judgment: namely, that the person has whatever it is that benefits a person.[1] If you and I and have different values, then we may well differ about which lives we consider happy. 1.2 Clarifying our inquiry 2. 2.1 The chief candidates 2.2 Methodology: settling on a theory 3. 4. 5.

Women in STEM: four steps to a stronger Athena Swan application | Higher Education Network | Guardian Professional A change is in the air: Athena Swan, the charter recognising commitment to women's careers in STEM, has become a topic of conversation at meetings in universities up and down the country. I was at a leukaemia research meeting only the other week and spent most of my coffee break talking about the scheme. Minds have been focused by money. The National Institute for Health Research's BRC/BRU funding will require a minimum silver Athena Swan award, which can only be obtained following a submission to the Equality Challenge Unit (ECU). For this reason, most universities and departments now have their own self-assessment team preparing or planning applications, with over 90 awaiting decisions from the last round. I recently sat on an Athena Swan assessment panel. 1) Write a good letter First impressions matter. 2) Identify your organisation's direction Is the number of female staff increasing or are you becoming more male dominated? 3) Check recruitment at all levels • Thinking about training.

Action for Happiness Girls' school holds 'blow your own trumpet' week 28 April 2013Last updated at 22:03 ET By Sean Coughlan BBC News education correspondent Head teacher Heather Hanbury warns of the constant pressures on girls An independent girls' school is holding a "blow your own trumpet" week to help over-pressured, high-achieving pupils who find it difficult to accept that they have been successful. "Some teenagers will continue to push themselves, never recognising when they've done enough," said Heather Hanbury, head of Wimbledon High School. Last year the school ran a "failure week" to help girls cope with setbacks. Now the London day school says it wants to raise girls' sense of "self-worth". Ms Hanbury said that after last year's innovative "failure week" she had been contacted by fellow head teachers who said pupils could also have problems in coping with their achievements, with some girls unable "to accept success when it finally came". Self-confidence Continue reading the main story “Start Quote End QuoteHeather HanburyHead, Wimbledon High School

Happiness Associated With Longer Life Happy people don't just enjoy life; they're likely to live longer, too. A new study has found that those in better moods were 35% less likely to die in the next 5 years when taking their life situations into account. The traditional way to measure a person's happiness is to ask them about it. But over the past few decades, psychologist and epidemiologist Andrew Steptoe of University College London (UCL) says, scientists have realized that those measures aren't reliable. The English Longitudinal Study of Ageing tried to get more specific. Of the 924 people who reported the least positive feelings, 7.3%, or 67, died within 5 years. The research shows that good moods are correlated with long life, but it's not proof that happiness makes people live longer, Steptoe says.

10 of the most controversial productivity tips that actually work 4.7K Flares Filament.io 4.7K Flares × We’ve all heard what makes us more productive. To be more productive, get: Better sleep, better food, better work environment, etc. And yet, today, I thought of changing it up dramatically. “To do the impossible, you need to ignore the popular.” So with this article, I tried to really step aside from the popular and look for the counter-intuitive. Let’s dig and find out some of the most controversial things you could do today to boost your creativity, happiness and productivity: 1.) Often, if you are anything like myself, we are in an endless quest for “feeling productive” and for “getting motivated” to do great work. Most of our biggest achievements get done, even without being motivated or inspired, so he describes: “Is it accurate to assume that we must ‘overcome’ fear to jump off the high dive at the pool, or increase our confidence before we ask someone out for a date?” Then, start doing it anyway, without trying to change your emotions. 2.) 3.)

What Do Emotions Have to Do with Learning? Thinkstock When parents and teachers consider how children learn, it’s usually the intellectual aspects of the activity they have in mind. Sidney D’Mello would like to change that. During the learning experiments described in his paper, he notes, the participating students reported being in a neutral state only about a quarter of the time. Another counter-intuitive contention made by D’Mello is that even negative emotions can play a productive role in learning. Confusion motivates us to restore our equilibrium through thought, reflection, and problem solving, and deeper learning is the result. animated agents discussing scientific case studies. Confusion, D’Mello explains, is a state of “cognitive disequilbrium”; we are mentally thrown off balance when we encounter information that doesn’t make sense. In fact, deep learning may be unlikely to happen without the experience of confusion, suggests a study conducted by another researcher, Arizona State’s Kurt VanLehn. Related

This pearl shows the difference between real and fake happiness and how it affects your wellbeing. This is a good source when considering the differenct between long term and short term happiness. by c.gallagher595 Dec 13