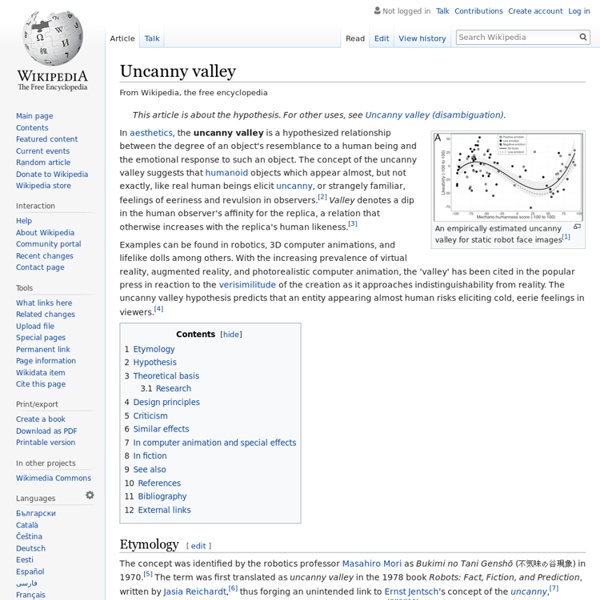 An empirically estimated uncanny valley for static robot face images[1] In aesthetics, the uncanny valley is a hypothesized relationship between the degree of an object's resemblance to a human being and the emotional response to such an object. The concept of the uncanny valley suggests that humanoid objects which appear almost, but not exactly, like real human beings elicit uncanny, or strangely familiar, feelings of eeriness and revulsion in observers.[2] Valley denotes a dip in the human observer's affinity for the replica, a relation that otherwise increases with the replica's human likeness.[3] Examples can be found in robotics, 3D computer animations, and lifelike dolls among others. Etymology[edit] Hypothesis[edit] In an experiment involving the human lookalike robot Repliee Q2 (pictured above), the uncovered robotic structure underneath Repliee, and the actual human who was the model for Repliee, the human lookalike triggered the highest level of mirror neuron activity.[12] Ho, C.

Twinity – Powered by Real Life Twinity: cracks in the mirror One fascinating aspect of Twinity has always been it's mirror philosophy: "Twinity is a 3D mirror world based on real cities and real people." Second Life used to have the tag line "Your world, your imagination"; Twinity has "Powered by Real Life", which nicely captures the difference between the two. There are, however, small cracks in the mirror, situations where the real world and the virtual mirror do not match. For instance, most people do not use their real identity in Twinity; they own places they don't have in the real world. These differences do not matter that much to me: the cities and buildings that make up the real world are mirrored, the inhabitants not necessarily. But this becomes more of an issue with Twinity's latest addition: the idyllical island of Palmadora which has opened recently. I have mixed feelings about Palmador. But - there should not be a Palmador: the mirror is conjuring up a picture that doesn't exist in reality.

Metaverse Roadmap: Pathways to the 3D Web Virtual Worlds Timeline: Origins & Evolution of Social Virtual W Wiki RepRap is humanity's first general-purpose self-replicating manufacturing machine. RepRap takes the form of a free desktop 3D printer capable of printing plastic objects. Since many parts of RepRap are made from plastic and RepRap prints those parts, RepRap self-replicates by making a kit of itself - a kit that anyone can assemble given time and materials. It also means that - if you've got a RepRap - you can print lots of useful stuff, and you can print another RepRap for a friend... RepRap is about making self-replicating machines, and making them freely available for the benefit of everyone. Reprap.org is a community project, which means you are welcome to edit most pages on this site, or better yet, create new pages of your own. RepRap was the first of the low-cost 3D printers, and the RepRap Project started the open-source 3D printer revolution. RepRap was voted the most significant 3D-printed object in 2017. About | Development | Community | RepRap Machines | Resources | Policy