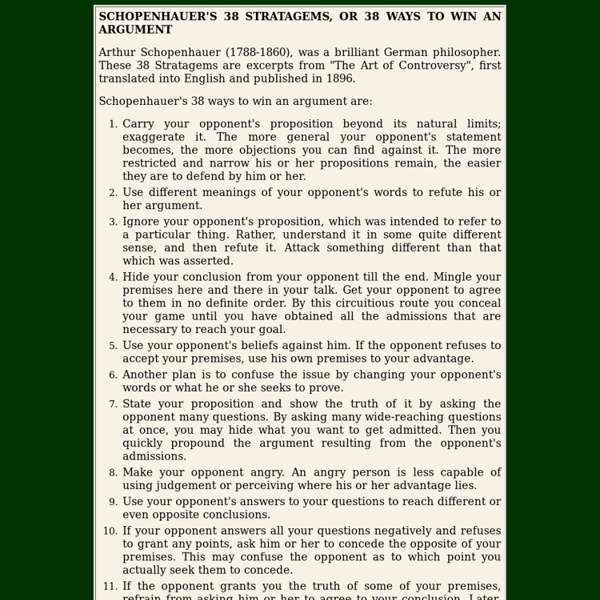 Arthur Schopenhauer (1788-1860), was a brilliant German philosopher. These 38 Stratagems are excerpts from "The Art of Controversy", first translated into English and published in 1896. Carry your opponent's proposition beyond its natural limits; exaggerate it. The more general your opponent's statement becomes, the more objections you can find against it. The more restricted and narrow his or her propositions remain, the easier they are to defend by him or her. Use different meanings of your opponent's words to refute his or her argument. (abstracted from the book:Numerical Lists You Never Knew or Once Knew and Probably Forget, by: John Boswell and Dan Starer)

Symbolic Logic Symbolic logic is the method of representing logical expressions through the use of symbols and variables, rather than in ordinary language. This has the benefit of removing the ambiguity that normally accompanies ordinary languages, such as English, and allows easier operation. There are many systems of symbolic logic, such as classical propositional logic, first-order logic and modal logic. Each may have seperate symbols, or exclude the use of certain symbols. Logical Symbols The following table presents several logical symbols, their name and meaning, and any relevant notes. Psychological manipulation Psychological manipulation is a type of social influence that aims to change the perception or behavior of others through underhanded, deceptive, or even abusive tactics.[1] By advancing the interests of the manipulator, often at another's expense, such methods could be considered exploitative, abusive, devious, and deceptive. Social influence is not necessarily negative. For example, doctors can try to persuade patients to change unhealthy habits. Social influence is generally perceived to be harmless when it respects the right of the influenced to accept or reject and is not unduly coercive. Depending on the context and motivations, social influence may constitute underhanded manipulation.

List of Fallacies A fallacy is incorrect argument in logic and rhetoric resulting in a lack of validity, or more generally, a lack of soundness. Fallacies are either formal fallacies or informal fallacies. Formal fallacies[edit] Main article: Formal fallacy Writing the Dreaded Cover Letter I've written other posts about writing challenges connected to the job search: how writing anxiety can affect the job search and how writing samples add another layer of challenge to the job seeker. But of all the writing-related activities of the job search, the one task most universally hated is the cover letter. It seems to cause anxiety for many otherwise well-qualified job seekers. And there's a reason for that: it's not an easy document to write. You have to find a way to appeal to the employer, summarize your key strengths relevant to the position, convey your personality, express your interest, and differentiate yourself from every other candidate- and all in one page. Oh, that's all?

Little Steps: 100 Great Tips For Saving Money For Those Just Getting Started Yesterday, I discussed how anyone can turn their financial life around if they just take that first step – the first step is always the hardest one. After that, you start taking more and more little steps and before you know it, your financial life is getting better and better. What follows is a list of 100 more steps to take. Each of these tactics are simple little moves you can make to improve your financial situation. Some of them take just a few minutes, others might take an hour or two, some of them require a bit of regular effort, but they’re all incredibly simple – anyone can do them. Each of them also save significant money, especially over the long haul, and when combined together these tips can save you a lot of money now.

25 Acts of Body Language to Avoid Our body language exhibits far more information about how we feel than it is possible to articulate verbally. All of the physical gestures we make are subconsciously interpreted by others. This can work for or against us depending on the kind of body language we use. Some gestures project a very positive message, while others do nothing but set a negative tone. Most people are totally oblivious to their own body language, so the discipline of controlling these gestures can be quite challenging. Most of them are reflexive in nature, automatically matching up to what our minds are thinking at any given moment.

Fallacy A fallacy is the use of poor, or invalid, reasoning for the construction of an argument.[1][2] A fallacious argument may be deceptive by appearing to be better than it really is. Some fallacies are committed intentionally to manipulate or persuade by deception, while others are committed unintentionally due to carelessness or ignorance. Fallacies are commonly divided into "formal" and "informal". A formal fallacy can be expressed neatly in a standard system of logic, such as propositional logic,[1] while an informal fallacy originates in an error in reasoning other than an improper logical form.[3] Arguments containing informal fallacies may be formally valid, but still fallacious.[4] Formal fallacy[edit] Main article: Formal fallacy 100+ Sites to Download All Sorts of Things These days you can find all sorts of things online, from audio books to flash files, from sound effects to CSS templates. Below we compiled a list with over 100 download sites that serve that purpose. We will also try to keep the list updated, so if your favorite download site is not here, let us know about it with a comment. Audio Books Librivox: One of the most popular audio libraries on the web.

How to Become a Productivity Ninja Believe it or not, productivity can be learned, grasshopper. Yeah, I didn’t believe it either..until I transformed myself into a productivity ninja. Today, I’m going to teach you to maximize your time at your computer, dominate your email in-box, and spend less time on unimportant tasks to focus on what really matters. Poor Man's Polygraph Part 1 Poor Man's Polygraph - Part 1 The Well... Technique Imagine you think your spouse is having an affair. Imagine your child comes home late and you suspect shenanigans. Imagine your clients or employees mislead you.

Tools & Utilities for filmmakers You've now entered the Dependent Films Download Center. It's unbelievable 1) how much these files can help, and 2) how hard all of these tools are to find on the net. Thus, this is why we've assembled this compilation for all of you aspiring filmmakers out there. Best of all, they're all FREE (a favorite word for all independent filmmakers). These programs have really helped our productions, and hopefully they can help yours as well. The secrets of body language: why you should never cross your arms again 7K Flares Filament.io 7K Flares × Body language is older and more innate for us as humans than even language or facial expressions. That’s why people born blind can perform the same body language expressions as people who can see. They come pre-programmed with our brains.

<a href="konveksijaketbandungtersimple12.wordpress.com/">good</a> by soyan2 May 7