The 10 Types of Writers' Block (and How to Overcome Them) 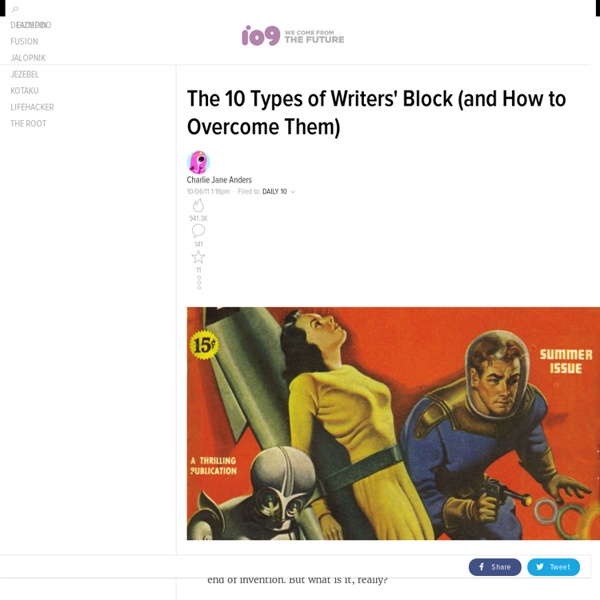 #4 was a really common event in my undergrad screenwriting classes (where it was commonly called the Page 70 Problem or the Act 2 Dead Zone or some other ridiculous name). It is really where outlining-as-you-go can prevent problems. For instance, I might have a ten point outline for the whole story and as I catch up to various points I may go back over the outline and flesh out points with another outline. If a scene is really tricky, my outline might be as specific as three points for five pages. But something that is really simple may never get more than a "this happens". The most important writing tips I've ever gotten: Write when you're good (I'm best first thing in the morning). Also, keep a bunch of "quick fixes" in mind if you're having trouble.

The Ultimate Guide to Writing Better Than You Normally Do. Writing is a muscle. Smaller than a hamstring and slightly bigger than a bicep, and it needs to be exercised to get stronger. Think of your words as reps, your paragraphs as sets, your pages as daily workouts. Think of your laptop as a machine like the one at the gym where you open and close your inner thighs in front of everyone, exposing both your insecurities and your genitals. Because that is what writing is all about. Nominalizations Are Zombie Nouns Draft is a series about the art and craft of writing. Take an adjective (implacable) or a verb (calibrate) or even another noun (crony) and add a suffix like ity, tion or ism. You’ve created a new noun: implacability, calibration, cronyism.

Read These Seven Books, and You'll be a Better Writer Donald Miller I used to play golf but I wasn’t very good. I rented a DVD, though, that taught me a better way to swing, and after watching it a few times and spending an hour or so practicing, I knocked ten strokes off my game. Creating Compelling Characters 1. Make the character exceptional at something. Give your character a trait or skill that makes him or her admirable in some way. Always for the First Time by Andre Breton Always for the First Time by Andre Breton Live Scores Click here to see the rest of the list Share this page : Andre Breton (19 February 1896 – 28 September 1966 / Normandy) #417 on top 500 poets

Naomi Rose can help you with: how to write a book, writing a book, short story writing, writing child book, tips on writing a book, steps to writing a book, writing your own book, writing a non fiction book, Book coaching, Book-writing guidance, Help writ by Naomi Rose Reprinted from Massage Magazine, Issue 104, Sept. – Oct. 2003 Most people don’t think of massage and writing as having anything to do with each other. After all, one is nonverbal, the other verbal. George Orwell: Politics and the English Language Most people who bother with the matter at all would admit that the English language is in a bad way, but it is generally assumed that we cannot by conscious action do anything about it. Our civilization is decadent and our language — so the argument runs — must inevitably share in the general collapse. It follows that any struggle against the abuse of language is a sentimental archaism, like preferring candles to electric light or hansom cabs to aeroplanes. Underneath this lies the half-conscious belief that language is a natural growth and not an instrument which we shape for our own purposes. Now, it is clear that the decline of a language must ultimately have political and economic causes: it is not due simply to the bad influence of this or that individual writer. But an effect can become a cause, reinforcing the original cause and producing the same effect in an intensified form, and so on indefinitely.

The Annotated Hobbit Review The Annotated Hobbit is really the ultimate way for this book and classic fantasy tale to be read and enjoyed. You can choose to just read the main body of text which is positioned and separated down the middle sections of this hardcover or delve in and out of the annotations that appear on the edges of the pages. Unlike academic books which often feature rather dry annotations, this one is filled with magical little gems and snippets of information which allow you to gain a greater insight on the author, J.R.R.

On Writing Convincing Male Characters How do you write realistic male characters? That’s a question I often hear from women writers. Today, we’ll look at that and point you in the right direction, but let’s be clear that this is not something you’re going to learn overnight. Anna posted this question on my “Ask A Question For My Blog” page: How do you write convincing male characters? I thought I had it down pretty well, but I was told the other day that several of my guys were feminine.