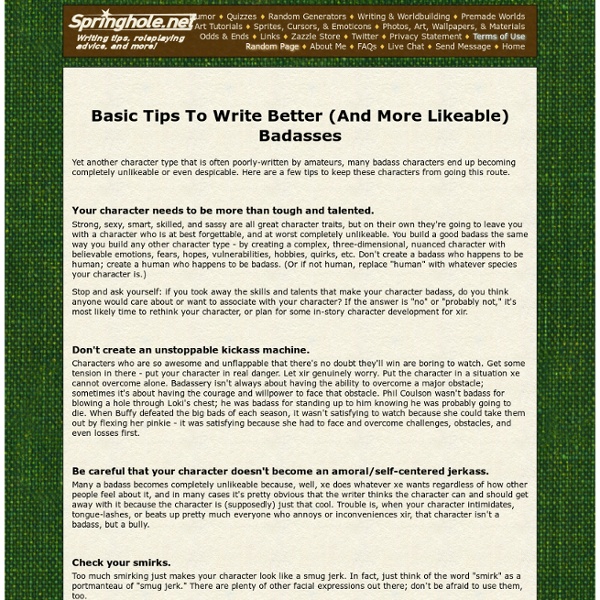 Yet another character type that is often poorly-written by amateurs, many badass characters end up becoming completely unlikeable or even despicable. Here are a few tips to keep these characters from going this route. Your character needs to be more than tough and talented. Strong, sexy, smart, skilled, and sassy are all great character traits, but on their own they're going to leave you with a character who is at best forgettable, and at worst completely unlikeable. Stop and ask yourself: if you took away the skills and talents that make your character badass, do you think anyone would care about or want to associate with your character? Don't create an unstoppable kickass machine. Characters who are so awesome and unflappable that there's no doubt they'll win are boring to watch. Be careful that your character doesn't become an amoral/self-centered jerkass. Smirks are not shortcuts to cool.

Writing Masculine Characters There's nothing quite so jarring as reading a male character who speaks and behaves more like a teenage girl. Whether the differences are biological or sociological in cause, there are definitely some common differences in the way males and females tend to speak and behave that (at least at this point in time - in the future, as societal norms change, who knows?) typically need to be accounted for. Please note that I am writing this as a general guide, and not as a guide (let alone a rulebook!) for all male or "masculine" characters everywhere, since there will always be justified exceptions - not every man or "masculine" persona finds slapstick hilarious, for example. (And no, if you are female and you feel that any of these apply to you, I am not implying you are male. Make your character's dialog more direct. Back to General CharacterizationGo to a random page!

Common, Yet Terrible Character Descriptors - And How To Fix Them When asked to describe their characters, many people tend to use the same over-generalized descriptors over and over. The result tends to be what I call a "Forer profile" - it's so vague that it can fit any number of characters - all of whom are wildly different - equally well. And when the same character description could fit a sneaky trickster as it could a determined soldier as it could a grad student opening a florist's shop, that's a problem. So, I'm going to outline how to give more and better information on your character to give people a better idea of what sort of person they're reading about. For the sake of simplicity, we'll go with "animals" for most of this particular section. Question is, what do you mean by "animals," and how does your character relate to them? Here are other examples of useful statements: "My character volunteers at the animal shelter."" Don't say your character loves flowers - say that your character raises a flower garden or plans to become a florist.

So You Wanna Write/Play A Powerful/Talented Character That Probably Won't Be Perceived As A Mary Sue? Many, many, many times I've seen people complain that they can't write or play powerful characters without these characters being labelled as Mary Sues. I really have only one thing to say to this: it's probably either because your characters are Mary Sues, or because you're presenting your character the wrong way. Sure it's not the former? Okay, then let's get on to how you can present your character so people probably won't grab the torches and pitchforks. This article is largely intended for fan characters, though most of it applies to other character types as well. Start by describing what makes your character tick, not what makes xir special. When you begin your character profile/pitch, leave out your character's appearances, superpowers, and canon connections as long as you possibly can. If you have a well-developed character, you should be able to describe xir without mentioning xir powers, abilities, or canon connections quite easily. Remove irrelevant specialness.

Write Better Ensemble Casts Another fine article contributed by J. Avoid homogeny, if possible. It's all too easy to create an entire group of characters who are almost just alike. Whether they're the same race/species or just have the same main interest, they often come out as cookie-cutter clones. Sometimes this is acceptable - characters from a racially homogenous society will likely be of the same race, and characters whose lives center around a club will be interested in whatever that club is about - but unless them being so similar is relevant to the plot or setting, leave it out. If your character is a team of superheroes, for example, there's no reason for every one of them to have great dress style - and if they live in a racially diverse area, there's no good reason for all of them to be white. Remember - you are allowed to intentionally create a minority character to make your cast more diverse. Avoid the "one of each" effect. Happy/grumpy/any mood is not a personality. Leave out The Tagalong.

Mary Sue Test Background A Mary Sue is an unrealistic type of literary character commonly created by inexperienced authors. Although they vary, a typical Mary Sue has an unreasonable number of cool or special traits, especially ones the author wishes he or she had, and they tend to accomplish things too easily, solve problems too neatly, and become the center of attention whether they deserve it or not. This test aims to help authors evaluate whether their characters are in danger of becoming Mary Sues by drawing attention to potentially problematic traits. When taking this test, be honest, but keep it in perspective and remember context. The test has seven sections: This test comes from this thread in the Writer's Block subforum on TV Tropes. Section 1: Author Avatars There's nothing wrong with using yourself as the basis for a character. Generally, items in this section score one point each. Scoring -28-0: Your character may be an antihero. 1-10: Your character is understated. Return to top

The Universal Mary Sue Litmus Test Stuck with a case of massive writer's block? Has your muse gone on indefinite hiatus? Or are you just bored? The Universal Mary Sue Litmus Test How to use this test: First, if you're unsure of what a Mary Sue is, please read this page. Answer all questions for which the answer is 'yes' or 'technically yes' unless the item mentioned is so commonplace in the universe you are writing for that it doesn't really make your character remarkable or unusual. If your character is a role-playing character and the only reason you can answer 'yes' is because of other players acting of their own free wills (IE, everyone has their characters throwing themselves at your character's feet and you've done nothing to force this) do not answer yes to the corresponding question. If you see a question that looks like it's been linked, rest your cursor over it - it contains a tool tip, which should contain further information on the subject. Part 5 - De-Suifiers Questions that subtract from the final score.

Character Development: Creative Writing Print version Characters are the most important component of any narrative. Without them, there would be no story. Character development is an important skill to master because characters are important parts of any creative writing from books and short stories, from biographies and autobiographies, to poetry. The development of a character is a very detailed process, and one that requires a lot of thought. Physical Details about the character: Is he/she short, tall, thin, old, etc? Schaefer and Diamond also state that character development is more effective when the author reveals traits about the character through the ways mentioned above and allows the reader to make his/her own judgments, rather than stating character traits directly. Option 2 is a more effective approach because it allows the readers to form judgments about the young boy themselves, rather than simply accepting the author’s word for it. His/her family: relationships, beliefs, habits, religion, activities, etc.

Introducing Characters - First Impressions Introducing Characters - First Impressions by Melanie Anne Phillipscreator StoryWeaver, co-creator Dramatica When your reader/audience first meets your characters in a story, it has the same effects as when you are introduced to someone in real life. You might tell your reader/audience all there is to know about a particular character right up front. Then there is the question of who shows up first? Who is your Main Character? You know all about your characters while your audience knows nothing. Sometimes an author may want to have a character with a dark side, or a hidden side that will be revealed only later in the story. Remember, first impressions are lasting, and an audience with the first impression of someone as a good guy, will resist thinking of them as a bad guy for as long as possible. *Try either or both for 90 days. About Dramatica and StoryWeaverWhat They DoDramatica is a tool to help you build a perfect story structure.

Write Better Chosen Ones In every other fantasy story, there is a Chosen One. Xe can alone defeat the Big Bad and save the universe. Unfortunately, Chosen Ones are incredibly easy to completely bork up. Ask yourself whether you really need a Chosen One If you can restructure your story so that it does not involve a Chosen One, you probably should. Make the future uncertain If you've decided you need a Chosen One, make sure that the outcome is uncertain - ie, that there is a chance that the hero could completely fail in xir quest. Do not use your character's Chosen status as a substitute for actual motivation Some chosen ones - particularly evil chosen ones and dark messiahs - have no real reason for doing anything other than they've been chosen to do it. Do not use your character's Chosen status as a substitute for actual skill or practice Don't have your character successfully bumble through everything because Destiny says your character must succeed. Don't make your character the ultimate solver of all problems

Writing Characters | Creative Writing Course In this fifth session in my free creative writing course, we will be looking at writing characters. In creative writing we become, in a way, like God. In short stories, novels and poems, we construct a world then fill it with people who take on a life of their own. Character, Plot and Message There are three kinds of stories: those that start from character, from plot or from message. A message-driven story is one where a writer starts with an idea or theme (enviromentalism, religion, anti-war etc) then crafts a plot and populates it with types who will best illustrate the message. A character-based story is when the characters are so memorable and well-drawn that the story would not exist without them. The key of course if to have all three elements in balance. Exercise 16: Think of your own writing. Starting from Character That being said, I still think the best way to write is to start with character. Exercise 17: Find some pictures of people. Motivation Conflict