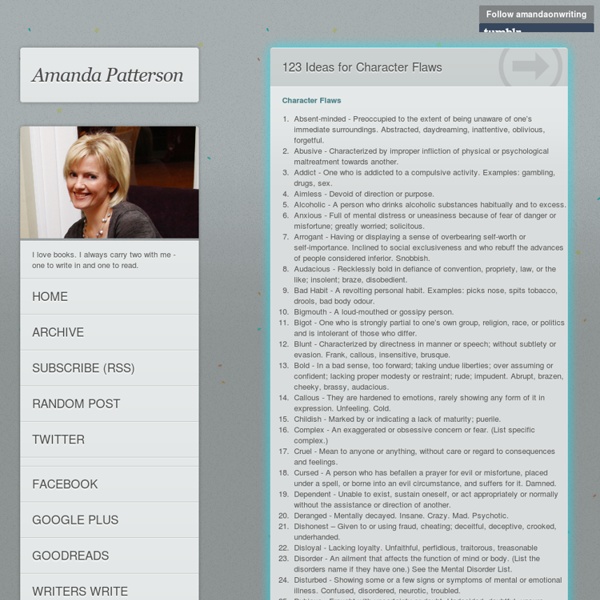 10 Ways to Start Your Story Better The sentence you are currently reading has the potential to brand itself indelibly upon our cultural consciousness and to alter the course of Western Civilization. OK, maybe that’s an exaggeration. But what author doesn’t dream of crafting an opening line that will achieve the iconic recognition of “Call me Ishmael,” or the staying power of “In the beginning, God created the heaven and the earth …”? In writing, as in dating and business, initial reactions matter. You don’t get a second chance, as mouthwash commercials often remind us, to make a first impression. This post is by Jacob M. So it’s unfortunate that opening sentences frequently receive short shrift in writing workshops. Think of every opening line you write as a pebble tossed down a mountainside: The stone may jolt back and forth within a limited path, building up force, but the trajectory of its initial release largely determines its subsequent route. Here are 10 ways to do it. 1. 2. 3. 4. 5. 6. 7. 8. 9. 10.

638 Primary Personality Traits Positive Traits (234 = 37%) 3 Steps to Writing a Novel with Unforgettable Characters Character development is one of the first essential steps of writing a novel and it involves creating the people who will carry out your story. There will most likely be a variety of characters needed for your story, but none as important as your lead character – your protagonist. A well-developed protagonist has much to do with the success of writing a novel. When writing a novel, the protagonist should be someone that your readers feel is a “real person” that they come to love (or at least like a whole lot), can relate to in many ways, and will care about and think about long after they’ve turned the final page on your novel. How to Create “Real People” for Your Novel When writing a novel, there are many ways to go about creating characters and much has been written about it in “how to write a novel books”, sometimes in great detail. Writing a Novel – Four Attributes of a Lead Character: 1. 2. 3. 4. Writing a Novel – Three Attributes Every Character Has: 1. 2. 3. 1. 2. 3.

8 Ways to be UBER Charismatic What did JFK, Marilyn Monroe and Hitler all have in common? They were all renowned charismatics that lit up every room they entered. You’ve most likely met one of these kinds before. The guy/girl at the party. Robert Greene studied these people and detailed the methods one can use to become a charismatic in his book “The Art of Seduction.” Purpose Pick a cause, a goal, a vision and live it. Mystery Become mysterious (like Bruce Wayne) by being unpredictable. Saintliness Think Gandhi. Eloquence Speak slowly and hypnotically, with random pauses if needed. Theatricality Be larger than life. Danger/Spontaneity Radiate dangerous, rebellious sexuality. Vulnerability Have a soft side and love your followers. Magnetism Develop a piercing gaze. DO NOT COMMENT.

How Much of My World Do I Build? First, let me say that worldbuilding is an essential skill for every writer, regardless of genre. Not all writers need to concentrate on all areas of worldbuilding, but every writer must do some worldbuilding if he hopes to have a novel that is coherent, consistent, and real. Second, writers seem to come in three varieties — those who really have no idea what worldbuilding is or why they should bother with it; those who do know, but figure they’ll wing the details as they go; and those obsessive folks who secretly believe that they really can’t start the book until the whole planet is in place. I’ve spent time in all three camps — most of my time in the last one. The system works. Build only what you need; imply the rest. What do you need? A — Special physics It used to be that the only places where you might run into special physics were in SF and fantasy novels. If you require special physics, however, you must now answer the following questions. Special Physics — Matrin Magic On to step F.

50 of the Best Websites for Writers There are tons of reference sites on the web that can help you find a job or write a poem, essay or story. Here is a list of the best 50 websites for writers. Reference Websites Merriam-Webster Online - Merriam Webster is the perfect place to look up words and find information. General Writing Websites Writer's Digest - Probably one of the best all-around websites for writers, Writer's Digest offers information on writing better and getting published. Fiction Writing Websites About.com - About.com publishes a Guide to Fiction Writing with general information about fiction writing and a number of community forums for both current and aspiring writers. Nonfiction Writing Websites Bella Online - This site offers a large collection of resources for nonfiction writers. Websites for Freelance Writers and Authors Media Bistro - This site is a good place to find freelance jobs online.

Character Trait Cheat Sheet - Kris Noel In order to create a relatable character, you must think about them as having several layers. Knowing and choosing character traits is important because you don’t want them to be one dimensional. It’s all not as simple as saying “this person is mean” or “this person is kind”. Think about the people you know in real life. I’ve listed some examples of character types: Adventurer: high levels of energy, bold, dominant, competitive, fickle, leader. Bossy: confident, competitive, stubborn, close minded, serious, lacks shame or guilt, wants a high status. Creator: artistic, observant, persistent, sensitive, introverted, becomes easily absorbed, enthusiastic, likes his or her own company. Extrovert: outgoing, talkative, not easily intimidated, expressive, enjoys being with others, seeks social situations. Fearful: driven by fears of rejection, unhappy, withdrawn, avoids stress, uncomfortable in social situations, problems being assertive. -Kris Noel My book My goodreads

How To Write a Death Scene | Writerly Life People often visit Creative Writing Corner searching for answers about how to write a death scene, so it’s about time that I gave my thoughts about it. I was first given the assignment to write a death scene as a stand-alone piece when I was a freshman in college, in my very first creative writing class. I chose to write a creative non-fiction piece about a relative of mine. For someone witnessing the death of a beloved person, the scene is not just about the way the person is going. After the jump: more things to do in a death scene. It’s very easy to get cheesy in a death scene, instantly robbing your story of its tenderness and emotion. What made people respond to my written piece and call it poignant weren’t the heavy-handed bits or the sweeping generalizations, but the details. These are a few tips for writing a death scene in your own story or novel.