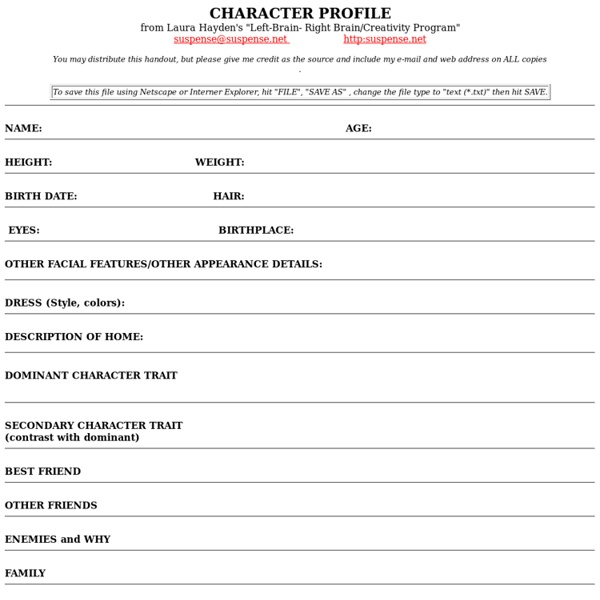 troubling.info Eight rules for writing fiction: 1. Use the time of a total stranger in such a way that he or she will not feel the time was wasted. 2. 100 Mostly Small But Expressive Interjections David Bier Thanks for this – what a fun post considering there’s no actual narrative in it! Cecily Some of these interjections are quite culturally and age specific, so if people need to be told what they mean, they should probably not be using them.For example, to many Brits, va-va-voom is not old-fashioned at all, but instead is firmly linked to the long-running ads that footballer Thierry Henry made for the Renault Clio. Himanshu Chanda Whoa ! What a biiiig list. And yes this ones really great.

Poem Starters and Creative Writing Ideas Enter your e-mail to get the e-book for FREE. We'll also keep you informed about interesting website news. "I have searched the web and used different worksheets, but none have come close to your worksheets and descriptions of (what to do and what not to do). Both courses I have taken have with Creative Writing Now have been amazing.

How I built an electricity producing Solar Panel Several years ago I bought some remote property in Arizona. I am an astronomer and wanted a place to practice my hobby far away from the sky-wrecking light pollution found near cities of any real size. In my attempt to escape city slicker yuppies (you know the kind, the ones that like to blab loudly on their cell phone while they work on some business administration degree in a cyber cafe somewhere in Trendyland.) and their light pollution, I found a great piece of remote property. The problem is, it's so remote that there is no electric service available.