Filipino OFWs in the Middle East

2 abused Pinay workers rescued in Saudi Arabia await repatriation. Two maltreated Filipina domestic workers in Saudi Arabia were rescued from their abusive employer and are now waiting to be repatriated to the Philippines, a Saudi news site reported Sunday. 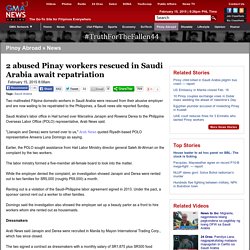 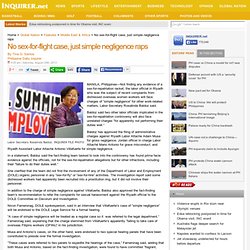 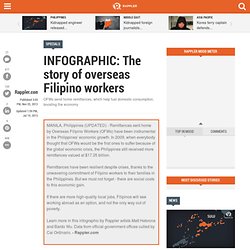 In 2009, when everybody thought that OFWs would be the first ones to suffer because of the global economic crisis, the Philippines still received more remittances valued at $17.35 billion. Remittances have been resilient despite crises, thanks to the unwavering commitment of Filipino workers to their families in the Philippines. If there are more high-quality local jobs, Filipinos will see working abroad as an option, and not the only way out of poverty. Learn more in this infographic by Rappler artists Matt Hebrona and Bardo Wu. Report: 20 Pinoys to be repatriated from UAE Monday. Twenty Filipinos who had sought assistance from the Philippine Overseas Labor Office–Overseas Workers Welfare Administration (POLO-OWWA) in the United Arab Emirates will be repatriated on Monday, UAE-based Khaleej Times reported on Sunday. 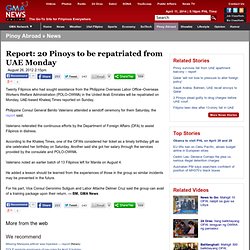 Philippine Consul General Benito Valeriano attended a sendoff ceremony for them Saturday, the report said. Valeriano reiterated the continuous efforts by the Department of Foreign Affairs (DFA) to assist Filipinos in distress. According to the Khaleej Times, one of the OFWs considered her ticket as a timely birthday gift as she celebrated her birthday on Saturday. Another said she got her salary through the services provided by the consulate and POLO-OWWA. Valeriano noted an earlier batch of 13 Filipinos left for Manila on August 4. Day2Conejos. Binay: 4,500 OFWs from Saudi to be repatriated - Pinoy Abroad. Let our women go, PH asks Libya. 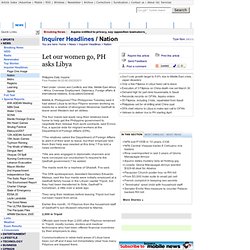 The Philippines Tuesday said it had asked Libya to let four Filipino women working as maids for a relative of strongman Moammar Gadhafi to leave amid Western-led air strikes. The four maids last week rang their relatives back home to help get the Philippine government to negotiate their release from work contracts, said Enrico Fos, a special aide for migrant workers at the Department of Foreign Affairs (DFA). ? The relatives called the Department of Foreign Affairs to alert it of their wish to leave, but their employer told them their help was needed at this time,? Fos told a news conference. ? The maids work for a nephew of Ghadafi, Fos said. The DFA spokesperson, Assistant Secretary Eduardo Malaya, said the four maids were initially employed at a Gadhafi family house in the Libyan capital Tripoli, but they had been transferred to Sirte, Gadhafi?

They rang their relatives before leaving Tripoli but had not been heard from since. 2,000 in Tripoli. Binay leaves for special mission to Middle East - Nation - GMA News Online - The go-to site for Filipinos everywhere - Latest Philippine News. Hours after attending activities marking the 25th anniversary of the 1986 EDSA People Power uprising, Vice President Jejomar Binay left Friday evening for a one-week special mission to the Middle East. 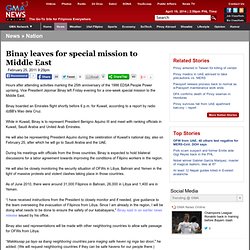 Binay boarded an Emirates flight shortly before 6 p.m. for Kuwait, according to a report by radio dzBB's Mao dela Cruz. While in Kuwait, Binay is to represent President Benigno Aquino III and meet with ranking officials in Kuwait, Saudi Arabia and United Arab Emirates. He will also be representing President Aquino during the celebration of Kuwait’s national day, also on February 25, after which he will go to Saudi Arabia and the UAE. 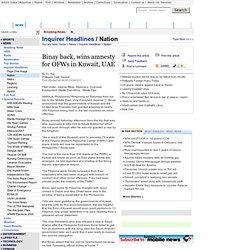 Returning on Saturday from his trip to the Middle East, Vice President Jejomar C. Binay announced that the governments of Kuwait and the United Arab Emirates had granted amnesty to nearly 300 Filipinos being held in the two countries on minor offenses. Binay arrived Saturday afternoon from the trip that was also supposed to take him to Saudi Arabia but which did not push through after he was not granted a visa by the kingdom. ? As a result of the (Kuwaiti) emir? The rest of the more than 200 wards at the FWRC in Kuwait will follow as soon as their plane tickets are arranged, he told reporters at a briefing at the Ninoy Aquino International Airport. The Filipinos were mostly runaways from their employers who had been charged with breach of contract and other minor offenses.