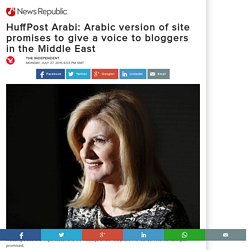 Launched on Tuesday, HuffPost Arabi is the 14th international edition of the blogging platform, which has close to 100m global monthly unique visitors. HuffPost Arabi is a joint venture between Ms Huffington, who founded the Post in 2005 and Wadah Khanfar, a former director-general of the Al Jazeera television news network. Official Zain Kuwait Flashmob - فلاش موب زين الكويت. Iran doing business with the ‘Great Satan’ - Al Arabiya News. Intriguingly, Iranian Supreme Leader Ayatollah Ali Khamenei has been quiet about the bombings and attacks in Iraq by what they call “The Great Satan” - the United States. 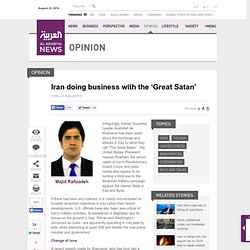 President Hassan Rowhani, the senior cadre of Iran’s Revolutionary Guard Corps, and state media also appear to be turning a blind eye to the American military campaign against the Islamic State in Iraq and Syria. If there has been any criticism, it is mainly concentrated on broader American objectives in Iraq rather than recent developments. U.S. officials have also been less critical of Iran’s military activities, its assistance to Baghdad, and its troops on the ground in Iraq. Tehran and Washington - perceived as rivals - are apparently operating in Iraq side by side, while attempting to quell ISIS and bolster the new prime minister and government.

Automatics for the People. Richard N. Haass argues that the Middle East is less a problem to be solved than a condition to be managed. Exit from comment view mode. 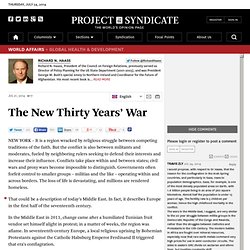 Click to hide this space NEW YORK – It is a region wracked by religious struggle between competing traditions of the faith. But the conflict is also between militants and moderates, fueled by neighboring rulers seeking to defend their interests and increase their influence. Conflicts take place within and between states; civil wars and proxy wars become impossible to distinguish. Goodbye, Middle East. The United States is backing off from the Middle East — and the Middle East from the United States. 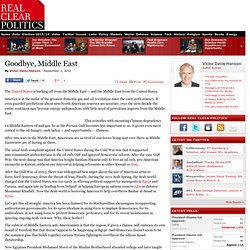 America is in the midst of the greatest domestic gas and oil revolution since the early 20th century. If even guarded predictions about new North American reserves are accurate, over the next decade the entire continent may become energy-independent, with little need of petroleum imports from the Middle East.

This coincides with mounting Chinese dependency on Middle Eastern oil and gas. Politblogme : Interesting #infographics on... IMESClub - On the 25th of April IMESClub held two panels. Iran, UN diplomats stress need for understanding in ME. Lebanese security forces inspect the site of an explosion in the capital, Beirut, in October 2012. 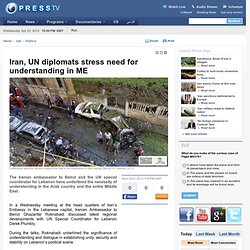 The Iranian ambassador to Beirut and the UN special coordinator for Lebanon have underlined the necessity of understanding in the Arab country and the entire Middle East. In a Wednesday meeting at the head quarters of Iran’s Embassy in the Lebanese capital, Iranian Ambassador to Beirut Ghazanfar Roknabadi discussed latest regional developments with UN Special Coordinator for Lebanon Derek Plumbly. 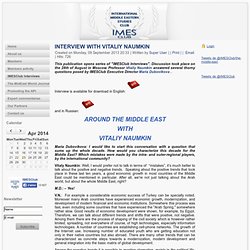 Discussion took place on the 28th of August in Moscow. Professor Vitaliy Naumkin answered several thorny questions posed by IMESClub Executive Director Maria Dubovikova . INTERVIEW WITH VITALIY NAUMKIN. INTERVIEW WITH VITALIY NAUMKIN. Geopolitical and Regional Dynamics: an Overview. Politblogme : It made my day!! Welcome to... Egypt: Mass Attacks on Churches. The Middle East’s New Divide: Muslim Versus Muslim. Riot police hold a copy of the Quran as they clear members of the Muslim Brotherhood and supporters of deposed Egyptian President Mohammed Mursi, from Rabia al-Adawiya Square, where they were camping, in Cairo, Aug. 14, 2013. 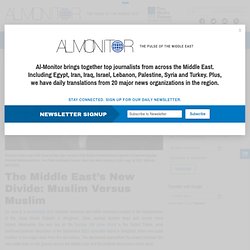 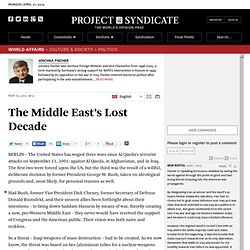 Click to hide this space BERLIN – The United States has waged three wars since Al Qaeda’s terrorist attacks on September 11, 2001: against Al Qaeda, in Afghanistan, and in Iraq. The first two were forced upon the US, but the third was the result of a willful, deliberate decision by former President George W. Bush, taken on ideological grounds and, most likely, for personal reasons as well. Had Bush, former Vice President Dick Cheney, former Secretary of Defense Donald Rumsfeld, and their neocon allies been forthright about their intentions – to bring down Saddam Hussein by means of war, thereby creating a new, pro-Western Middle East – they never would have received the support of Congress and the American public. So a threat – Iraqi weapons of mass destruction – had to be created. Ирина Звягельская: Запад и мусульманский мир. 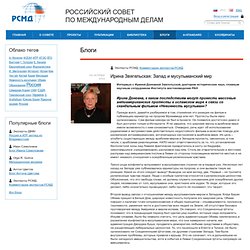 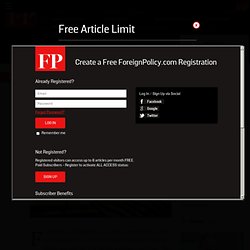 It consists of tools and instruments designed to achieve specific and hopefully well-thought-out ends. Those ends -- let's call them interests -- are theoretically supposed to drive a country's foreign-policy strategy. Sounds pretty simple, right? So what are America's interests in the Middle East? Middle East leaders some of the most engaging on Twitter. The World' s Muslims: Unity and Diversity. The world’s 1.6 billion Muslims are united in their belief in God and the Prophet Muhammad and are bound together by such religious practices as fasting during the holy month of Ramadan and almsgiving to assist people in need.

But they have widely differing views about many other aspects of their faith, including how important religion is to their lives, who counts as a Muslim and what practices are acceptable in Islam, according to a worldwide survey by the Pew Research Center’s Forum on Religion & Public Life. The survey, which involved more than 38,000 face-to-face interviews in over 80 languages, finds that in addition to the widespread conviction that there is only one God and that Muhammad is His Prophet, large percentages of Muslims around the world share other articles of faith, including belief in angels, heaven, hell and fate (or predestination). Some of these differences are apparent at a regional level. 09DAMASCUS697. Pewresearch : New report: "The World’s... Country Reports on Terrorism 2011 Middle East and North Africa Overview. The Near East region remained one of the most active in terms of terrorist activity in 2011.

Many countries across the region experienced increased instability as a result of the events of the Arab Awakening, and some terrorists attempted to exploit this situation. Syria’s Mutating Conflict. Middle East Report N°128 1 Aug 2012 At a distance, Syria’s conflict can resemble a slow, painful slog, punctuated by intermittent accelerations and apparent tipping points, influenced by international activity. Zoom in, and one can cast such impressions aside. Diplomatic manoeuvrings have ended up being little more than inertia masquerading as motion.

The West used them to pretend it was doing more than it was; Russia exploited them to feign it backed the Syrian regime less than it actually did. ‎www.crisisgroup.org/~/media/Files/Middle%20East%20North%20Africa/Iraq%20Syria%20Lebanon/Syria/128-syrias-mutating-conflict.

Europe-Middle East. Russia-Middle East. The 'Arab Spring' and other American seasons. Moyen-Orient / Middle East. Syrie - Syria. Tunisie 2.0. Riyadh deports 35 Ethiopian Christians for... JPost. BERLIN – Saudi Arabia deported 35 Ethiopian Christians last week after incarcerating them for over seven months for praying in advance of the Christmas season in December 2011, according to Christian media outlets and NGOs. International Christian Concern wrote on its website that “Saudi Arabia deported the last of the 35 Ethiopian Christians who were detained for holding an all-night prayer vigil. Saudi security officials assaulted, harassed and pressured the Christians to convert to Islam during their incarceration.” “We have arrived home safe. We believe that we are released as the result of the pressure exerted by ICC and others,” one of the Ethiopians told ICC. “The Saudi officials don’t tolerate any other religions other than Islam.