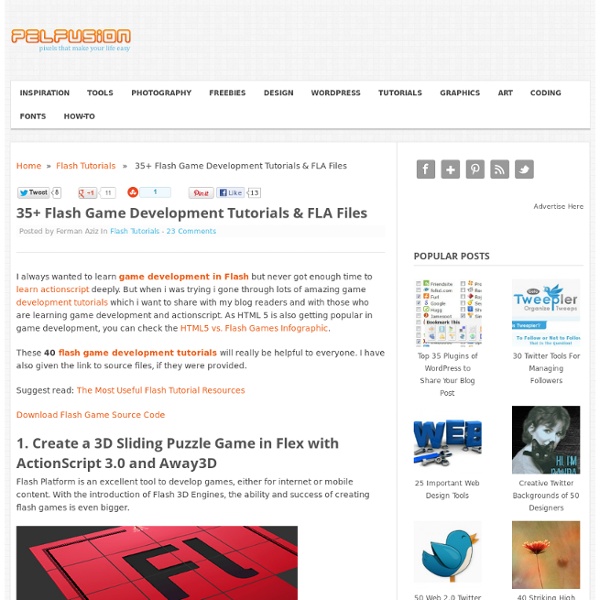 40 Top Flash Game Tutorial Roundup Flash is a very versatile and mature technology used in a number of ways including game development. This however creating a game using can be a challenge for beginners. This is partly because flash can be quite hard to learn and master. On the other hand typically people knowledgeable with flash, finds it to be a very effective and rewarding tool, not only in making beautiful and entertaining games but also for web design and development. To give you an idea how flash games are created, we are giving you this roundup consisting of a large flash game tutorial collection. We hope that you will find this article useful in improving your knowledge in developing flash games. Advertisement 1. This flash game tutorial will teach you how to create a flash racing game in easy step by step procedure. 2. Create a Flash ball game with a visual from above and some decent graphics. 3. Learn how to make a variant of the very popular Minesweeper. 4. 5. 6. 7. 8. 9. 10. 11. 12. 13. 14. 15. 16. 17. 18.

So You Wanna Make a Game? A Step-by-Step Guide to Becoming a Flash Game Developer | Mr Sun Studios So you want to be a flash game developer, eh? It’s something that’s easy to get into, but hard to get good at. I’m going to guide you through the process that a total newbie must get into in order to get into the business. Step 1: Get Flash The first obvious step in becoming a flash game developer is to actually get the program. There are two ways to get flash, expensively or cheaply. If you want to get it expensively, you can just go to Adobe’s Site and buy it for a couple hundred dollars. If you want it for only a fraction of the price, you’ll have to meet a few requirements. You can either get Flash for a few bucks ($248.95 compared to $699.99 from Adobe), or even a suite of programs for even less than Flash costs on Adobe itself ($398.95 – $598.95). Step 2: Get used to the Program (Optional) This step is optional, but still very highly recommended. The Toolbar This is the toolbar. The Properties Panel This is the properties panel. Other Panels that You’ll Need to Be Familiar With Finally!

Game Menus, UI, Screens, and Windows Whatever you want to call it, a complete Flash game is going to need an user interface that kicks off the game. A place where the user can get more information about the game, see the credits, save the game, load the game, whatever needs to be done. The Menu the starts the game provides this functionality. So how are we going to do it? Well, you’re probably thinking this is a simple task, and it is. Now, you are going to need to download a new zip file to start this project. Okay here’s the deal. Okay, so you have already seen our menus. Whoa, base class you say? I may have talked about this before and maybe you know what it is but if not I’ll explain. Alright so here’s the deal. And the breakdown: Alright that covers the BaseMenu. Oh this is simple. MainMenu.as CreditsMenu.as Okay Breakdown Time: First thing you notice is that both have imports and extend BaseMenu. See I told you it was simple! Menus, UI, Screens, or Windows Complete Source Zip Archive

20 Free Tutorials to Create Your Own Flash Game Flash is a very flexible tool for building games that are both entertaining and educational. However, the software itself is a quite tough to learn and extremely hard to master. There are lots of websites providing free and paid tutorials of flash. Here we present you a bunch of free tutorials for game development in flash. Anyone who knows flash likes to create his own flash game. We believe these are the best free tutorials available in Flash Game Development. 1. This is a "time trial" racing game tutorial. 2. It is a shooting game where player / user have to shoot the flying balloons and gain the points. 3. GuessNext, a simple card game with highscores. 4. Its a series of tutorials on how to develop Space Shooter game. 5. This tutorial will show you all the basics of creating a platform game, Collisions that automatically move up slopes, Jumping, Moving, Simple Scrolling, Basic AI, and health 6. This tutorial is intended for intermediate or advanced users of ActionScript. 7. 8. 9. 10.

11+ Hand-Pick Step By Step Flash Game Development Tutorials Flash is a very flexible tool for building games, most time we can find the flash game AS3 source like Zuma-like Flash Game With AS3 Source Code from internet, for the beginers who want to create his/her own flash game, step by step tutorials is a good choice. There are lots of websites providing free and paid tutorials of flash, here is a collection 11+ handpick step by step flash game development tutorials. Enjoy! Advanced Mathematical Functions in Flash Many flash users have wanted to take advantage of the actions capabilities to do really cool things. AS3 Character Movement: Asteroids Style 360 Degree Movement Well if we are going to discuss character movement… one of the most important has got to be 360 movement based on rotation. Base Defender The objective of this game is to defend the tnt beneath the grass by blowing up any incoming airplanes and the bombs they drop. There are a few interesting techniques used in this game, and I’ll try to highlight them. Flash Racing Game Tutorial

Labs Hide the progress bar forever? Yes No Learn to create your first game Making games is easy! Well, okay, maybe it's actually kind of hard, but starting out is easy at least! Especially when you have Kongregate's shootorials (shooting tutorials) to guide you through the process. Check out the link below to play through the game you can learn to build yourself. Play 'Shoot!' If you'd like to discuss the shootorials with other Kongregate members, join the Kongregate Labs discussion on our forums. Shootorials Ready to remix 'Shoot!' Shootorial 0: Flash! This beginner flash game programming tutorial covers the basics of downloading the free trial version of Adobe Flash CS3, as well as covering some of the fundamentals of using Flash as a game making tool. Shootorial 2: Scrolling Background Every game hero needs a world to defend or conquer. Shootorial 3: Missiles The hero needs to fire missiles in order to stop the invading minions. Shootorial 5: Collision Detection Shoot!

Create a Flash Racing Game Tutorial If you’re interested in gaming and blogging, YouSayToo lets you earn from your flash games and allows you to make money blogging. In this tutorial we’ll cover the creation of a flash racing game. I got the permission from Remus C. from gameSheep to publish this awesome tutorial. Before we start, I recommend you all to give a look at gameSheep. Moreover, this tutorial will give the start to another series of tutorials about creating a flash racing game. Let’s start! Moving the car 1. 2. 3. 4. Click on the first frame of the second layer (“actions”) and if the Actions windows is not open, press F9 to display it. We will discuss this script in a few moments, but first let’s see how Flash “understands” movement and coordinates. Just a bit of trigonometry and Flash Flash is using the classic Cartesian Coordinate System (a grid based system with a horizontal axis OX and a vertical axis OY). So, from trigonometry we know (in this case) that: sin(angle) = speedx/speed and cos(angle) = speedy/speed 1. 2.

Simple Android Ball Game Download source - 5.53 MB Introduction This is a tutorial for developing a Ball Game in Android OS. It will introduce you to developing Android games using AndEngine (free Android 2D open source game engine). To understand this tutorial, you will need to have some basic knowledge about AndEngine and programming in Java. The Game It's a classic game idea implemented in a modern way. What You Need to Start? To start developing your own Android games, you need SDK and game engine (it will make your life way easier!). Let's Do Some Coding! Let's see what is hiding in the code! First, we will take a short tour in the main class. GameLogicController is the base class in our game, BaseGameActivity is the base class in AndEngine and IAccelerometerListener is the interface used to get data from your mobile phone accelerometer sensor. Method onLoadEngine creates a new game engine. Here, you can see four very important things. Sprite is just graphic on the scene. The last described class is Player.