US VS THEM: ISLAMAPHOBIA

British Muslims face worst job discrimination of any minority group, according to research - Home News - UK - The Independent. Muslim men were up to 76 per cent less likely to have a job of any kind compared to white, male British Christians of the same age and with the same qualifications. 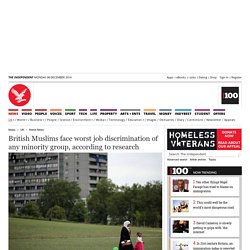 And Muslim women were up to 65 per cent less likely to be employed than white Christian counterparts. Muslims were the most disadvantaged in terms of employment prospects out of 14 ethno-religious groupings in the UK, researchers Dr Nabil Khattab and Professor Ron Johnston found using data from the Office for National Statistics' Labour Force Survey of more than half a million people. Skin colour made little difference to the figures. Dr Nabil Khattab, of Bristol University, said the situation was "likely to stem from placing Muslims collectively at the lowest stratum within the country's racial or ethno-cultural system due to growing Islamophobia and hostility against them. Loading gallery.

Why Islamophobia is so dangerous. By Imran Awan Source: CNN By: Imran Awan Source: CNN Whether it’s Mohammed becoming the most popular baby name, or one in 10 babies in England being Muslim or the fact that halal meat is being served in Pizza Hut, a Muslim story always tends to generate more heat than light. 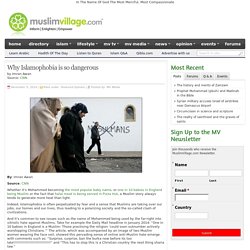 Indeed, Islamophobia is often perpetuated by fear and a sense that Muslims are taking over our jobs, our homes and our lives, thus leading to a polarizing society and the so-called clash of civilizations. Anti-Muslim Hate Crime Soars In London, According To New Police Figures. Muslim hate crime in London has shot up by almost 65% in twelve months, with spikes in violence linked not to Islamic State beheadings, but to incidents closer to home like the Rotherham grooming scandal. 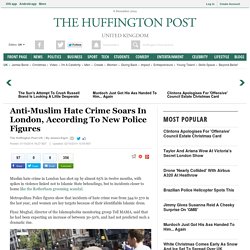 Metropolitan Police figures show that incidents of hate crime rose from 344 to 570 in the last year, and women are key targets because of their identifiable Islamic dress. Fiyaz Mughal, director of the Islamophobia monitoring group Tell MAMA, said that he had been expecting an increase of between 30-50%, and had not predicted such a dramatic rise. Muslim women shopping in central London, where anti-Islam hate crimes have shot up in the past 12 months "It's certainly linked to current events, but the severity of the reports we get vary, depending on what is happening in the news," he told HuffPost UK. "When there's an IS beheading, or there's a terror threat made against the UK, you'll find a bombardment of online abuse and threats. "There is a pattern [of violence]," she added.

ISIS And Rotherham Fuelling 'One Of The Most Worrying Periods Of Right-Wing Extremism' The threat from far-right extremism is growing in the UK, a senior Home Office adviser warned today, with Islamophobia escalating in the wake of Islamic State terrorism and crimes involving Muslims in Britain. 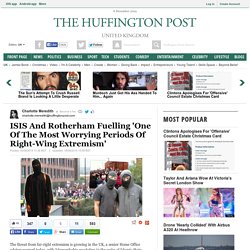 The recent findings of an inquiry into child sex abuse in Rotherham and the crisis in Iraq and Syria are fuelling increased hate crime towards Muslims, the government adviser on right-wing extremism said. "This is one of the most worrying periods in right-wing extremism, given the growth in right-wing groups and the recent news events which are making them more angry," the anonymous expert claimed.

The adviser, who works with the the Home Office's Prevent strategy, warned that the government is wrongly putting an emphasis on the "global jihadist agenda," while possibly ignoring the growth of the far-right at home. Mehdi Hasan Tells Wilderness Festival The 'Hysterical' British Press Is Encouraging Islamophobia. Sections of the British press are encouraging Islamophobia and publishing "brazen lies" that exacerbate community tensions, one of the UK's leading Muslim journalists has said. 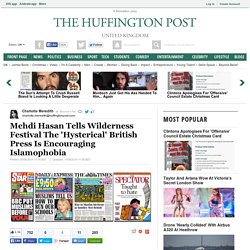 In a controversial attack on his fellow journalists, Mehdi Hasan – The Huffington Post UK's political director and a columnist for the New Statesman magazine – has claimed that the country's leading newspapers publish stories about Muslims that they would not dare publish about any other minority group. Muslims worldwide denounce ISIS - but Islamophobes aren't listening. Authoritative Muslim voices from all quarters are denouncing ISIS, as they have denounced al-Qaeda and terrorism in general for years-but the silence from the mainstream media and from professional Islamophobes is deafening. 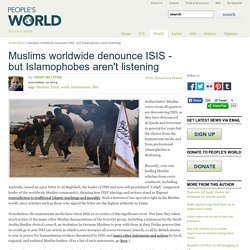 Recently, over 100 leading Muslim scholars from every continent, including Australia, issued an open letter to Al-Baghdadi, the leader of ISIS and now self-proclaimed "Caliph" (supposed leader of the worldwide Muslim community), showing how ISIS' ideology and actions stand in flagrant contradiction to traditional Islamic teachings and morality. Such a statement has special weight in the Muslim world, since scholars such as those who signed the letter are the highest authority in Islam. Nonetheless, the mainstream media have taken little or no notice of this significant event. 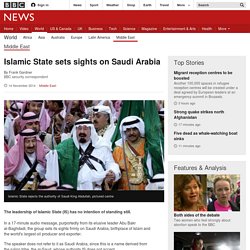 British Army Veteran Amongst Fighters Joining Kurds To Fight Islamic State In Syria. A British army veteran is one of several Britons who has travelled to join Kurdish forces fighting Islamic State, according to Facebook posts. 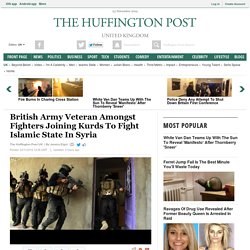 The Observer reported that one of the growing number of Europeans in Syria fighting with the Kurdish peshmerga is a former Afghanistan infantryman with the British army, James Hughes from Reading. He is believed to be in Rojava, the Kurdish area of northern Syria where forces are attempting to save the beleaguered city of Kobani from falling into jihadist hands. A picture posted on the Facebook page of one of the recruits He is also believed to be with his friend, Jamie Read, from Newmains in Lanarkshire, whose Facebook page says he trained with the French army.

Somalia's Al-Shabab Says It Killed 28 In Kenya. NAIROBI, Kenya (AP) — One gunman shot from the right, one from the left, each killing the non-Muslims lying in a line on the ground, growing closer and closer to Douglas Ochwodho, who was in the middle. 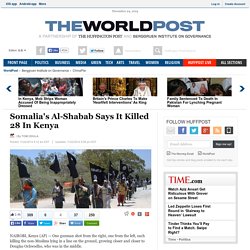 And then the shooting stopped. Apparently each gunman thought the other shot Ochwodho. He lay perfectly still until the 20 Islamic extremists left, and he appears to be the only survivor of those who had been selected for death. Somalia's Islamic extremist rebels, al-Shabab, attacked a bus in northern Kenya at dawn Saturday, singling out and killing 28 passengers who could not recite an Islamic creed and were assumed to be non-Muslims, Kenyan police said.

Those who could not say the Shahada, a tenet of the Muslim faith, were shot at close range, Ochwodho told The Associated Press. Nineteen men and nine women were killed in the bus attack, said Kenyan police chief David Kimaiyo. U.N. History, Travel, Arts, Science, People, Places. Queen Rania of Jordon in powerful attack on ISIS. The 44-year-old monarch was speaking to the Abu Dhabi Media SummitShe said images posted by ISIS are 'alien and abhorrent to vast majority of Arabs' and should make 'every Arab seethe'Queen said silence of moderates made them complicit in ISIS' success By Nabila Ramdani In Abu Dhabi For Mailonline Published: 10:38 GMT, 20 November 2014 | Updated: 12:31 GMT, 20 November 2014. 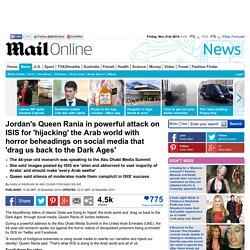 'Trojan Horse' fear over six leading Muslim schools: Ofsted to warn Minister of 'serious concerns'  Pupils at school in Stepney, east London, 'exposed to Islamic extremism'Inspectors discovered girls and boys were segregated in the playground YouTube channel created by an Islamic society was not checked by staffLeading state school will be put into special measures by Ofsted today By Laura Clark and Inderdeep Bains and David Williams for the Daily Mail Published: 04:26 GMT, 20 November 2014 | Updated: 00:55 GMT, 21 November 2014 Six Muslim faith schools in London are expected to be branded inadequate today over fears that they are not preparing pupils for life in modern Britain.

In a memo to Education Secretary Nicky Morgan, Ofsted inspectors are expected to highlight ‘serious concerns’. They will also criticise a leading state school in the same east London borough after it emerged that sixth-formers used a Facebook page to post references to Sheikh Omar Suleiman, an Islamic preacher who has called homosexuality a ‘disease’ and a ‘repugnant shameless sin’. Scroll down for video. Cardiff 'not a hotbed of radicalisation' 20 November 2014Last updated at 12:50 ET Islamic State poster in Cardiff city centre in July Cardiff is not a hotbed of radicalisation or extremism, a community leader has said. Abdul Azim Ahmed, from the Muslim Council of Wales, said work was under way to identify "pockets of problems". He said radicalisation happens on the streets away from mainstream Muslim institutions making it hard to address.

Mr Ahmed's comments come after pictures obtained by The Wales Report show a man holding an Islamic State poster in Cardiff city centre in July. Cardiff South and Penarth MP Stephen Doughty called for action over radicalisation which he described as "very twisted". Church school fails inspection on Islamic society. 19 November 2014Last updated at 17:08 ET By Sean Coughlan BBC News education correspondent Tower Hamlets in east London: Ofsted is to reveal the findings of reports on seven schools this week A Church of England school previously graded outstanding is expected to be put into special measures over concerns about a sixth-form Islamic society.

Sir John Cass Foundation and Redcoat school, in Stepney, east London, is believed to have failed for not safeguarding and monitoring pupils. It is believed the society's Facebook page had links to a radical preacher. Boko Haram kills dozens in 'despicable' Nigeria attack. 20 November 2014Last updated at 18:35 ET Towns and villages in Borno state have been repeatedly attacked by militants Dozens of people have been killed in an attack by suspected Boko Haram militants in north-eastern Nigeria, officials and witnesses say.

Gunmen rampaged through the village of Azaya Kura in the Mafa area in Borno state, killing at least 45 people. Shettima Lawan, caretaker chairman of the local government, called it "wicked and despicable", AFP reports. Boko Haram has taken control of a series of towns and villages in north-eastern Nigeria in recent weeks. Authorities have struggled to defeat the militant Islamist group, which has been waging an insurgency in Nigeria since 2009. New York-based Human Rights Watch says Boko Haram has killed more than 2,000 civilians already this year. Bodies.