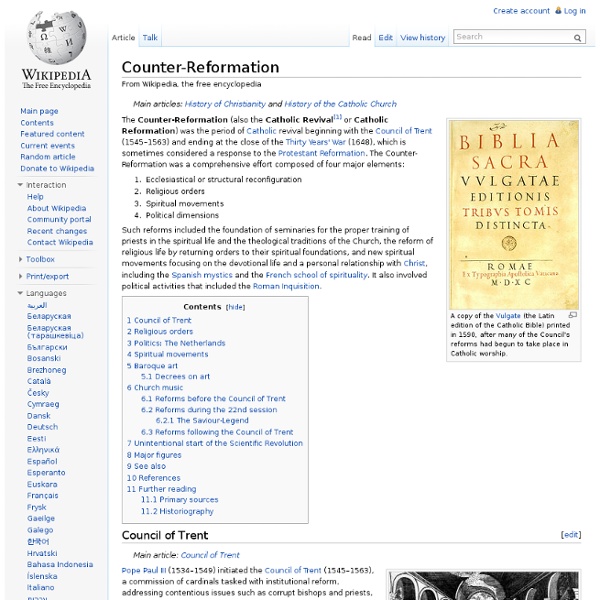 A copy of the Vulgate (the Latin edition of the Catholic Bible) printed in 1590, after many of the Council's reforms had begun to take place in Catholic worship. The Counter-Reformation (also the Catholic Revival[1] or Catholic Reformation) was the period of Catholic revival beginning with the Council of Trent (1545–1563) and ending at the close of the Thirty Years' War (1648), and was initiated in response to the Protestant Reformation. The Counter-Reformation was a comprehensive effort composed of four major elements: Ecclesiastical or structural reconfigurationReligious ordersSpiritual movementsPolitical dimensions Council of Trent[edit] A session of the Council of Trent, from an engraving. Pope Paul III (1534–1549) initiated the Council of Trent (1545–1563), a commission of cardinals tasked with institutional reform, addressing contentious issues such as corrupt bishops and priests, indulgences, and other financial abuses. Religious orders[edit] Politics: The Netherlands[edit]

The Reformation and Counter Reformation The Reformation and Counter Reformation Europe's Search For Stability The Reformation was the religious revolution that took place in the Western church in the 16th century; its greatest leaders were Martin Luther and John Calvin. Music of the Reformation Main performer: Himlische CantoreyBooklet languages: English, French, GermanLibretto languages: English, German, LatinTime: 49:00 Review We know mainly of Martin Luther as the monk who, in 1517, tacked up his 95 Theses to the front door of the Castle Church of Wittenberg and touched off the Protestant Reformation, an event that would change the course of European history and world religion forever. Black Death Spread of the Black Death in Europe (1346–53) The Black Death is thought to have originated in the arid plains of central Asia, where it then travelled along the Silk Road, reaching the Crimea by 1343.[6] From there, it was most likely carried by Oriental rat fleas living on the black rats that were regular passengers on merchant ships. Spreading throughout the Mediterranean and Europe, the Black Death is estimated to have killed 30–60% of Europe's total population.[7] In total, the plague reduced the world population from an estimated 450 million down to 350–375 million in the 14th century.

What Effects Did the Reformation Have on Church Music? The Protestant Reformation in Europe, primarily in Germany, has been one of the most influential events on Western culture in the history of the World. Its impact has been felt in almost every single aspect of life, from literature to day-to-day practices. Even today, much of what happened during the Protestant Reformation has a direct link to many aspects of today's Western Culture. One of these impacts that many do not consider is the impact that it had on music in the Church, and music in general. Music in the Church was, as it still is, very important. Also, like today, it was very important to everyday secular living.

THE REFORMATION AND COUNTER-REFO by James Jackson Background At the beginning of the sixteenth century, the Catholic church, modeled upon the bureaucratic structure of the Holy Roman Empire, had become extremely powerful, but internally corrupt. From early in the twelfth century onward there were calls for reform. Between 1215 and 1545 nine church-councils were held with church reforms as their primary intent. The councils all fail to reach significant accord.

Music and the Counter Reformation The Council of Trent To respond to the influence of Protestantism with its emphasis on unmediated, individual devotion, the Roman Catholic curia convened the many sessions which together are known as the Council of Trent. In the context of reforming the liturgy, the church laid down precepts governing how music should be conceived and set. While reflecting the views of St. Thirty Years' War The Thirty Years' War (1618–1648) was a series of wars principally fought in Central Europe, involving most of the countries of Europe.[10] It was one of the most destructive conflicts in European history, and one of the longest continuous wars in modern history. Initially, religion was a motivation for war as Protestant and Catholic states battled it out even though they all were inside the Holy Roman Empire. Changing the relative balance of power within the Empire was at issue. Gradually, it developed into a more general conflict involving most of the great powers of Europe.[11] In this general phase, the war became less specifically religious and more a continuation of the Bourbon–Habsburg rivalry for European political pre-eminence, leading in turn to further warfare between France and the Habsburg powers.[12] A major consequence of the Thirty Years' War was the devastation of entire regions, denuded by the foraging armies (bellum se ipsum alet).

THE COUNTER REFORMATION In the sixteenth century the Roman church undertook to reform itself. This reform movement, extending into the following century, raised the moral and educational standards of the clergy; inspired the church with a renewed zeal and morale, which enabled it to win back areas endangered by Protestantism; and contributed significantly to producing the Catholic church as we know it today. The chief agencies in carrying out this work were the papacy, which was much different from the papacy of the Renaissance; a group of religious orders, some reformed and some new, most notably the Society of Jesus, or Jesuits; and the Council of Trent. The Inquisition and the Roman Index of Prohibited Books also had a part in the work. The spirit of the Catholic Reformation was a spirit of zeal and ardor for the faith, a recognition of abuses in the church and a dedication to the work of reform, and an attitude of intolerance toward heresy.

Music in the Renaissance Music was an essential part of civic, religious, and courtly life in the Renaissance. The rich interchange of ideas in Europe, as well as political, economic, and religious events in the period 1400–1600 led to major changes in styles of composing, methods of disseminating music, new musical genres, and the development of musical instruments. The most important music of the early Renaissance was composed for use by the church—polyphonic (made up of several simultaneous melodies) masses and motets in Latin for important churches and court chapels. By the end of the sixteenth century, however, patronage was split among many areas: the Catholic Church, Protestant churches and courts, wealthy amateurs, and music printing—all were sources of income for composers. The early fifteenth century was dominated initially by English and then Northern European composers. The Burgundian court was especially influential, and it attracted composers and musicians from all over Europe.

The Reformation Brings New Approach to Sacred Music The Reformation Brings New Approach to Sacred Music As the Protestant Reformation swept across Europe, those who rebelled against Catholicism cast their new forms of worship in opposition to the Catholic Mass—including its music. How sacred music developed as part of the Reformation was explored in a presentation on Sept. 22 by Jane Dawson, Ph.D., the John Laing Professor of Reformation History at Edinburgh University’s School of Divinity. By the late Middle Ages, Dawson said, the performance of sacred music was relegated mainly to professionals who could understand its elaborate polyphonic structure.

Related:
Related:  solar decathlon counter entropy   -  VS   -  Pulse counter   -  US VS THEM: ISLAMAPHOBIA   -  Offline Vs Online   -  EAI vs ESB vs SOA   -  Free VS. Open   -  Counter-Terrorism Measures   -  The Tudors and the Reformation   -  To-inf vs -ING   -  lutte contre le terrorisme/counter-terrorism   -  Left vs. Right (US) — Information is Beautiful   -  The Ideological Animal | Psychology Today   -  Raffaello.name | Raffaello D'Andrea – Dynamic Works   -  US versus Manning, Assange, WikiLeaks, and the Press, the Time Line   -  iwanttolearnruby   -  THE REFORMATION AND COUNTER-REFO   -  The Reformation and Counter Reformation   -  THE COUNTER REFORMATION   -  a little lime: PATTERNS   -  Patterns that I have developed | Denzer Family Art   -  23 Signs You're Secretly An Introvert   -  How to Grow Your Personal Brand When You're an Introvert   -  Zentangle Tutorials on Pinterest   -  Pete Jones : My zentangle book "All the Zentangle Patterns in the World (that I could find and draw)"   -  Mandala Templates | Tangle Harmony   -  Tinker Tangles: Tangle Pattern: Zuan Shi   -  The Reading Brain in the Digital Age: The Science of Paper versus Screens   -  Doodling How to get started - YouTube   -  Pin by Monique Arthur on Zentangle Patterns | Pinterest   -  Sierra Ink: tangle   -  Susan Cain: The power of introverts   -  Article: Western Looting Of Ukraine Has Begun | OpEdNews   -  A Comparison of Angular, Backbone, CanJS and Ember - Sebastian's Blog   -  Trianglify by @qrohlf   -  Enterprise service bus — Wikipédia   -  Zentangle® - WetCanvas   -  Scientists Are Beginning to Figure Out Why Conservatives Are…Conservative