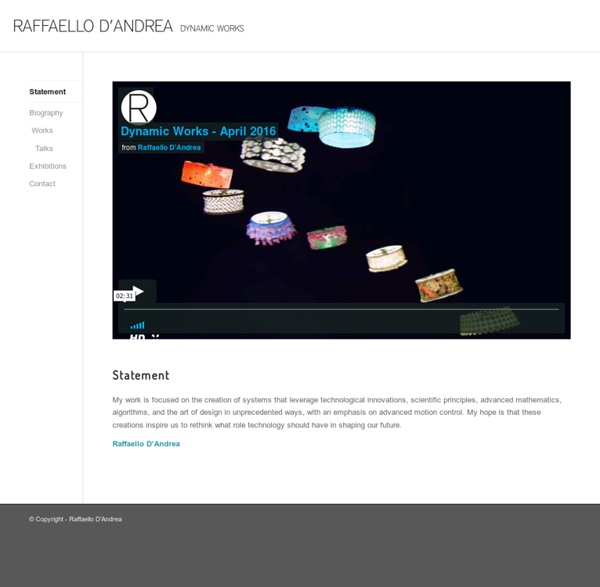 Self-Assembly Lab Uno 1 wheel Motorcycle The bike Uno from BPG Motors is a Transformers Segway Motorcycle. The new version Uno III has 3 wheels which when combined together give the impression that this is a motorcycle with one single wheel. Uno 3 can be transformed into a normal bike with a wheel that will put forward its own. Here the prototype BPG Motors seems more advanced and the startup has received funding and assistance from investors in a reality tv show (see in the video). Its price is about $ 6000, which is fair given that you have a bike right out of the future. Here at Vegas, with techno music : More Info on bpg-motors.com ThinkCube Innovation Hod Lipson Animal Architecture: Buckminster Fuller's Tensegrity In 1932 R. Buckminster Fuller famously philosophized: "Don't fight forces. Use them!" Fuller originally coined the term tensegrity, a portmanteau of tensional integrity, while studying "energetic-synergetic geometry" during World War II. Tensegrity describes a structural-relationship principle in which structural shape is guaranteed by the finitely closed, comprehensively continuous, tensional behaviors of the system and not by the discontinuous and exclusively local compressional member behaviors. Tensegrity structures fall into two main categories -- prestressed and geodesic. Geodesic tensegrity structures are "frameworks made up of rigid struts, each of which can bear tension or compression" (Ingber 49). The presence of tensegrity structures is not limited to avant-garde architecture, however. On an anatomical level, the human body provides a good example of a prestressed tensegrity structure. Several geodesic tensegrity structures naturally occur on the molecular level. Works Cited

Von Neumann universal constructor The first implementation of von Neumann's self-reproducing universal constructor.[1] Three generations of machine are shown: the second has nearly finished constructing the third. The lines running to the right are the tapes of genetic instructions, which are copied along with the body of the machines. The machine shown runs in a 32-state version of von Neumann's cellular automata environment, not his original 29-state specification. John von Neumann's Universal Constructor is a self-replicating machine in a cellular automata (CA) environment. Von Neumann's specification defined the machine as using 29 states, these states constituting means of signal carriage and logical operation, and acting upon signals represented as bit streams. Purpose[edit] Von Neumann's design has traditionally been understood to be a demonstration of the logical requirements for machine self-replication.[3] However it is clear that far simpler machines can achieve self-replication. Implementation[edit] C.

Borromean rings Mathematical properties[edit] Although the typical picture of the Borromean rings (above right picture) may lead one to think the link can be formed from geometrically ideal circles, they cannot be. Freedman and Skora (1987) prove that a certain class of links, including the Borromean links, cannot be exactly circular. A realization of the Borromean rings as ellipses 3D image of Borromean Rings Linking[edit] In knot theory, the Borromean rings are a simple example of a Brunnian link: although each pair of rings is unlinked, the whole link cannot be unlinked. Simplest is that the fundamental group of the complement of two unlinked circles is the free group on two generators, a and b, by the Seifert–van Kampen theorem, and then the third loop has the class of the commutator, [a, b] = aba−1b−1, as one can see from the link diagram: over one, over the next, back under the first, back under the second. Hyperbolic geometry[edit] Connection with braids[edit] History[edit] Partial rings[edit]

Thigmonasty Mimosa pudica in normal and touched state. Thigmonasty or seismonasty is the nastic response of a plant or fungus to touch or vibration.[citation needed] Thigmonasty is especially prevalent in the mimosa genus. Thigmonasty differs from thigmotropism in that it is independent of the direction of the stimulus. Species[edit] The most spectacular display of thigmonasty occurs in the Venus Flytrap (Dionaea muscipula). Legumes[edit] Pulvinus in extended and contracted position Many other members of the legume order display the same talent of rapid leaf closure motion in response to touch. Sensitive leaves also occur in plants of the sorrel family. Other forms[edit] A different form of thigmonasty than leaf closure occurs in thistle. Some fungi exhibit trap closure similar to the venus fly trap. See also[edit] References[edit] External links[edit]

#71: Slime Molds Show Surprising Degree of Intelligence Single-celled slime molds demonstrate the ability to memorize and anticipate repeated events, a team of Japanese researchers reported in January. The study [pdf] clearly shows “a primitive version of brain function” in an organism with no brain at all. In their experiment, biophysicist Toshiyuki Nakagaki of Hokkaido University and colleagues manipulated the environment of Physarum slime-mold amoebas (near right). As the cells crawled across an agar plate, the researchers subjected them to cold, dry conditions for the first 10 minutes of every hour. During these cool spells, the cells slowed down their motion. The scientists point out that catching on to temporal patterns is no mean feat, even for humans.

Slime mold Mycetozoa from Ernst Haeckel's 1904 Kunstformen der Natur (Artforms of Nature) Found in a wide variety of colors, more than 900 species of slime mold occur all over the world. Their common name refers to part of some of these organisms' life cycles where they can appear as gelatinous "slime". This is mostly seen with the myxogastria, which are the only macroscopic slime molds.[citation needed] Most slime molds are smaller than a few centimeters, but some species may reach sizes of up to several square meters and masses of up to 30 grams.[2] When food is abundant a slime mold exists as a single-celled organism. They feed on microorganisms that live in any type of dead plant material. Taxonomy[edit] Older classification[edit] Slime molds, as a group, are polyphyletic. Slime molds can generally be divided into two main groups. Modern classification[edit] In more strict terms, slime molds comprise the mycetozoan group of the amoebozoa. Slime mold (Physarum polycephalum) Life cycle[edit]

Kinematics Kinematics is a system for 4D printing that creates complex, foldable forms composed of articulated modules. The system provides a way to turn any three-dimensional shape into a flexible structure using 3D printing. Kinematics combines computational geometry techniques with rigid body physics and customization. Today we are releasing a jewelry collection and an accompanying customization app built upon our Kinematics concept. Kinematics is a branch of mechanics that describes the motion of objects, often described as the “geometry of motion.” Kinematics produces designs composed of 10’s to 1000’s of unique components that interlock to construct dynamic, mechanical structures. This project evolved out of a collaboration with Motorola’s Advanced Technology and Projects group which challenged us to create in-person customization experiences for low cost 3D printers. a tale of two apps The Kinematics app allows for the creation of necklaces, bracelets and earrings. the collection

What is self-assembly Self-assembly is a branch of nanotechnology in which objects, devices, and systems form structures without external prodding. Nanotechnology is a field of engineering that deals with design, manufacture, and control on a scale of a few nanometer s (nm) or less, where 1 nm = 10 -9 meters. In self-assembly, the individual components contain in themselves enough information to build a template for a structure composed of multiple units. An example is the construction of a monolayer, in which a single layer of closely-packed molecules sticks to a surface in an orderly and closely-packed fashion. Self-assembly should not be confused with positional assembly , a technique that has been suggested as a means to build objects, devices, and systems on a molecular scale using automated processes in which the components that carry out the construction process would follow programmed paths. Also see dendrimer , exponential assembly , positional assembly , and self-replication .

Hypernatural intelligence: A Fellows Friday conversation Fashion designer and BioCouture founder Suzanne Lee harnesses the labor of microorganisms to grow clothing. Computational architect Skylar Tibbits — who’s setting up a lab at MIT focused on self-assembly technologies and programmable materials — examines biological systems to develop his methods. We asked them to discuss the directions they’re exploring, and the trends and challenges inherent in working with natural processes to meet humanity’s needs. Your work seems to reflect a real trend in using technologies inspired by nature — not only in the design, which has happened on and off for centuries, but in the way you produce and fabricate the things you make.Skylar Tibbits: From my perspective, it is not about inspiration from Nature, and in many cases, we probably shouldn’t take inspiration from nature. Rather, nature is a good example of the systems we are exploring — but there are many non-natural systems that demonstrate similar principles. My work isn’t really inspired by nature.