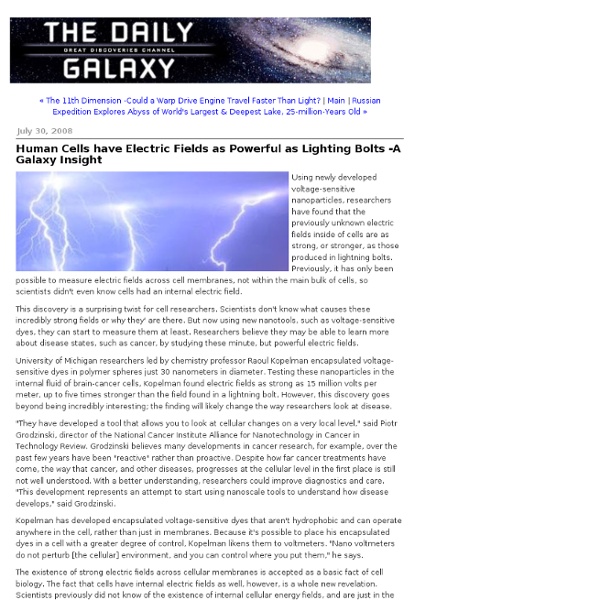 Using newly developed voltage-sensitive nanoparticles, researchers have found that the previously unknown electric fields inside of cells are as strong, or stronger, as those produced in lightning bolts. Previously, it has only been possible to measure electric fields across cell membranes, not within the main bulk of cells, so scientists didn't even know cells had an internal electric field. This discovery is a surprising twist for cell researchers. Scientists don't know what causes these incredibly strong fields or why they' are there. But now using new nanotools, such as voltage-sensitive dyes, they can start to measure them at least. University of Michigan researchers led by chemistry professor Raoul Kopelman encapsulated voltage-sensitive dyes in polymer spheres just 30 nanometers in diameter. Kopelman has developed encapsulated voltage-sensitive dyes that aren't hydrophobic and can operate anywhere in the cell, rather than just in membranes. Posted by Rebecca Sato Related:  science and beyond • Quantum Playground

Flowers get an electrifying buzz out of visiting bees - life - 21 February 2013 Plants could turn out to be one of the more chatty organisms. Recent studies have shown they can communicate with a surprising range of cues. Now it turns out they could be sending out electrical signals, too. As they fly through the air, bees – like all insects – acquire a positive electric charge. To test the idea, the team created artificial flowers, filling some with sucrose and others with quinine, a substance bees don't feed on. "That was the first hint that had us jumping up and down in the lab," says Robert. Next, his team looked at whether the bees were influenced by the shape of a flower's electric field, which is determined by the flower's shape. Ruthless evolution The researchers don't know exactly what information is contained in the flowers' electrical signals, but they speculate that flowers could evolve different shaped fields in their competition to attract pollinators. Of course, there may be a few cheaters out there that won't budge a millivolt when visited, he says.

Quantum 'weirdness' used by plants, animals - Technology & Science Birds like the European robin have an internal compass which appears to make use of a phenomenon called quantum entanglement. ((Vasily Fedosenko/Reuters)) Bird navigation, plant photosynthesis and the human sense of smell all represent ways living things appear to exploit the oddities of quantum physics, scientists are finding. Quantum mechanics is the branch of physics dealing with the strange behaviour of very tiny things like elementary particles and atoms, and is extremely different from the physics that humans experience every day. "Down at that level, everything is pretty darn weird," Seth Lloyd said before giving a lecture about quantum aspects of biology Wednesday evening in Waterloo, Ont. "Electrons can be in two places in once, or five places at once, or a thousand places at once. "When things get bigger, certainly on the scale of human beings or even at the scale of bacteria, then this kind of quantum weirdness tends to go away." Sensor, solar cell lessons Quantum Hanky-Panky

Pennywise and pound-foolish: misidentified cells and competitive pressures in scientific knowledge-building. The overarching project of science is building reliable knowledge about the world, but the way this knowledge-building happens in our world is in the context of competition. For example, scientists compete with each other to be the first to make a new discovery, and they compete with each other for finite pools of grant money with which to conduct more research and make further discoveries. I've heard the competitive pressures on scientists described as a useful way to motivate scientists to be clever and efficient (and not to knock off early lest some more dedicated lab get to your discovery first). But there are situations where it's less obvious that fierce competition for scarce resources leads to choices that really align with the goal of building reliable knowledge about the world. One of the worst cases involves a breast cancer cell line called MDA-435 (or MDA-MB-435). This may all come down to money. Sign up for Scientific American’s free newsletters.

Does DNA Emit Light? Dan Eden for viewzone.com An incredible story! I get lots of suggestions for stories, and I really appreciate them. But some of them are too good to be true. An example of this was a story of a giant human skeleton -- maybe 40 feet tall -- that was discovered by a Russian archaeological team. I had this same experience this week when I was sent an article where a Russian (again) scientist, Pjotr Garjajev, had managed to intercept communication from a DNA molecule in the form of ultraviolet photons -- light! But this was just the beginning. Dr. I tried to find a scientific journal that had this experiment. Fritz-Albert Popp thought he had discovered a cure for cancer. It was 1970, and Popp, a theoretical biophysicist at the University of Marburg in Germany, had been teaching radiology -- the interaction of electromagnetic (EM) radiation on biological systems. Why Ultra-violet light? [Above] All vibrations of energy are part of the electro-magnetic spectrum. Photorepair Light inside the body

Unusual quantum effect discovered in earliest stages of photosynthesis Quantum physics and plant biology seem like two branches of science that could not be more different, but surprisingly they may in fact be intimately tied. Researchers at the U.S. Department of Energy's (DOE) Argonne National Laboratory and the Notre Dame Radiation Laboratory at the University of Notre Dame used ultrafast spectroscopy to see what happens at the subatomic level during the very first stage of photosynthesis. While different species of plants, algae and bacteria have evolved a variety of different mechanisms to harvest light energy, they all share a feature known as a photosynthetic reaction center. These pigment molecules, or chromophores, are responsible for absorbing the energy carried by incoming light. "The behavior we were able to see at these very fast time scales implies a much more sophisticated mixing of electronic states," Tiede said. An article based on the study appeared online in the March 12 issue of the Proceedings of the National Academy of Sciences.

Stem cell 'major discovery' claimed 29 January 2014Last updated at 06:52 ET By James Gallagher Health and science reporter, BBC News Stem cell researchers are heralding a "major scientific discovery", with the potential to start a new age of personalised medicine. Scientists in Japan showed stem cells can now be made quickly just by dipping blood cells into acid. Stem cells can transform into any tissue and are already being trialled for healing the eye, heart and brain. The latest development, published in the journal Nature, could make the technology cheaper, faster and safer. The human body is built of cells with a specific role - nerve cells, liver cells, muscle cells - and that role is fixed. However, stem cells can become any other type of cell, and they have become a major field of research in medicine for their potential to regenerate the body. Embryos are one, ethically charged, source of stem cells. Acid bath He told the BBC: "I thought - 'my God that's a game changer!' 'Revolutionary'

New evidence that plants get their energy using quantum entanglement The fact that biological systems can exploit quantum effects is quite astounding. No it is not, not even remotely.There is literally no possible way that photosynthesis could take place without involving quantum physics. This particular exploit is really neat, of course, but far too much as been made of how mystical or ungraspable quantum physics is. The distinction being made is that toast-making was just as explicable with continuous waves of energy being absorbed by the bread but that no such classical interpretation is possible for these new photosynthesis observations. Right? Yeah, it's always easy to come in after someone's done the hard research and go "Oh, pff. Or, you can sit back and let people admire how wild our Universe is and just how little we know about it. well now why havent all the people working on this already aware of this? To think you are wasting all that genius writing on here! It is no more magical than classical physics. sort of like cells : animals