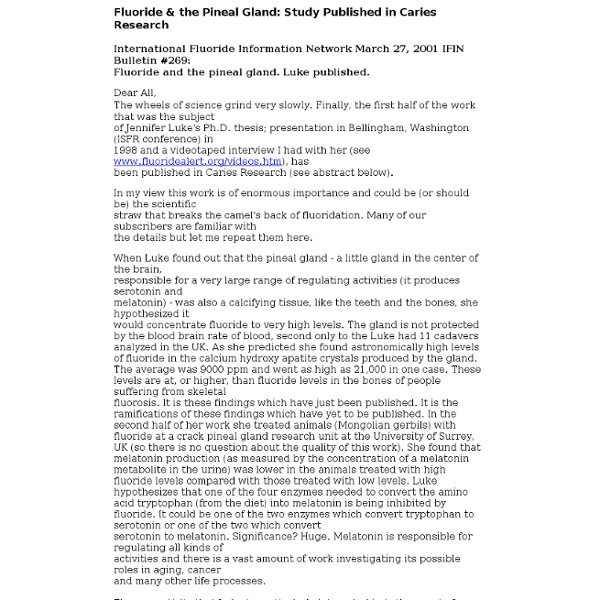 Fluoride & the Pineal Gland: Study Published in Caries Research International Fluoride Information Network March 27, 2001 IFIN Bulletin #269: Fluoride and the pineal gland. Luke published. Dear All, The wheels of science grind very slowly. Finally, the first half of the work that was the subject of Jennifer Luke's Ph.D. thesis; presentation in Bellingham, Washington (ISFR conference) in 1998 and a videotaped interview I had with her (see www.fluoridealert.org/videos.htm), has been published in Caries Research (see abstract below). In my view this work is of enormous importance and could be (or should be) the scientific straw that breaks the camel's back of fluoridation. Many of our subscribers are familiar with the details but let me repeat them here. The one activity that Luke is particularly interested in is the onset of puberty. I have a copy of Luke's Ph.D. thesis and would be willing to share it with those who have a serious scientific interest in this issue.

Solar Healing Center Process In the year 1962 Mother Mira of Pondicherry Ashram in India suggested to HRM that it was time to bring sungazing to the modern world. HRM then read widely and deeply for thirty long years on the sungazing practices of ancient times, which were once common all over the world with all almost all cultures and religions. Pineal Gland The pineal gland, also known as the pineal body, conarium or epiphysis cerebri, is a small endocrine gland in the vertebrate brain. It produces melatonin, a serotonin derived hormone, which affects the modulation of sleep patterns in both seasonal and circadian rhythms.[1][2] Its shape resembles a tiny pine cone (hence its name), and it is located in the epithalamus, near the center of the brain, between the two hemispheres, tucked in a groove where the two halves of the thalamus join. Nearly all vertebrate species possess a pineal gland.

Fluoride: A Chronology of Fluoridation By Val Valerian Fluoride The International Academy of Oral Medicine and Toxicology has classified Fluoride as an unapproved dental medicament due to its high toxicity. Fluoride was found to be an equivocal carcinogen by the National Cancer Institute Toxicological Program.1 A Chronology of Fluoridation By Val Valerian Alkaline Foods To Help Decalcify the Pineal Gland (By S. Ali Myers, Waking Times) Charge up your third eye (pineal gland) with high-vibrating, nutritionally enriched foods and drinks!