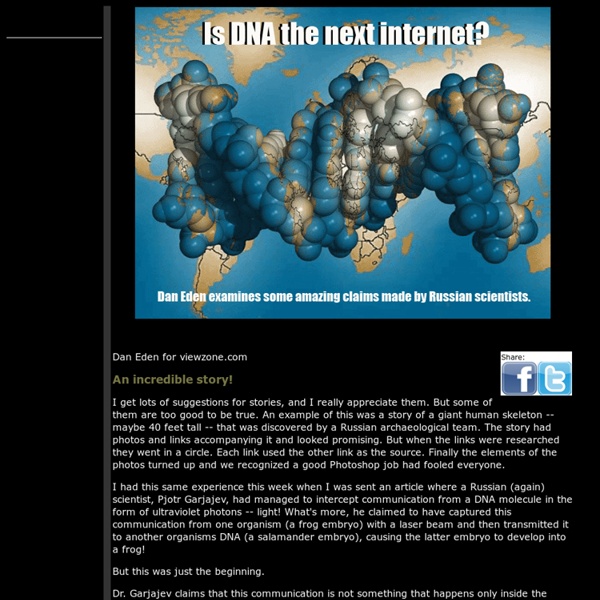 Dan Eden for viewzone.com An incredible story! I get lots of suggestions for stories, and I really appreciate them. But some of them are too good to be true. An example of this was a story of a giant human skeleton -- maybe 40 feet tall -- that was discovered by a Russian archaeological team. The story had photos and links accompanying it and looked promising. I had this same experience this week when I was sent an article where a Russian (again) scientist, Pjotr Garjajev, had managed to intercept communication from a DNA molecule in the form of ultraviolet photons -- light! But this was just the beginning. Dr. I tried to find a scientific journal that had this experiment. Fritz-Albert Popp thought he had discovered a cure for cancer. It was 1970, and Popp, a theoretical biophysicist at the University of Marburg in Germany, had been teaching radiology -- the interaction of electromagnetic (EM) radiation on biological systems. Why Ultra-violet light? Photorepair Light inside the body John B.

Herman Meinke: Orgone Devices rexresearch.com Herman MEINKE Orgone Devices Herman Meinke Products for Nature 23158 Cora Farmington Hills, MI 48025 Herman Meinke: The Odic Disk Machine H. Meinke: J. Borderland Research (May-June 1985); "Free Energy In Your Own Backyard" H. Meinke: J. Borderland Research (Nov-Dec 19889): "Ions & Orgone" H. The World's First Solar-Powered Sports Car Could Drive Forever Can a road-legal car be powered by the Sun alone? One company thinks so, and they’re planning to unveil a scaled-down version of their proposal later this year. Called “The Immortus,” the two-person vehicle is the work of EVX Ventures, an electric vehicle technology startup based in Melbourne, Australia. The car is decked out in solar panels, covering up to eight square meters (86 square feet), and also has a lithium battery to store energy, between five and 10 kilowatt-hours. So light is the car though, 500 kilograms (1,100 pounds) when empty and 700 kilograms (1,550 pounds) when fully laden, it is able to run on just solar power alone.

Quantum Biology and the Puzzle of Coherence One of the more exciting discoveries in biology in the last few years is the role that quantum effects seem to play in many living systems. The two most famous examples are in bird navigation, where the quantum zeno effect seems to help determine the direction of the Earth’s magnetic field, and in photosynthesis, where the way energy passes across giant protein matrices seems to depend on long-lasting quantum coherence. Despite the growing evidence in these cases, many physicists are uneasy, however. Closing the Doors of Perception wakingtimes.com/2015/07/02/closing-the-doors-of-perception/ This article was written by Dylan Charles from WakingTimes.com. “If the doors of perception were cleansed every thing would appear to man as it is, Infinite. For man has closed himself up, till he sees all things thro’ narrow chinks of his cavern.”

New Physics Formula Links Quantum Mechanics And Pure Math The notorious number Pi has succeeded in becoming even more prevalent in science. Researchers from the University of Rochester discovered that a formula which approximates the energy levels of a hydrogen atom is the same as the one developed 360 years ago by English mathematician John Wallis to find the value of Pi. The pair of physicists realized that when the variational method was employed to calculate the energy levels of the hydrogen atoms, the formula could be simplified into the Wallis Product, the one used for Pi.

Quantum weirdness is everywhere in the living world The point of the most famous thought-experiment in quantum physics is that the quantum world is different from our familiar one. Imagine, suggested the Austrian physicist Erwin Schrödinger, that we seal a cat inside a box. The cat’s fate is linked to the quantum world through a poison that will be released only if a single radioactive atom decays. Quantum mechanics says that the atom must exist in a peculiar state called ‘superposition’ until it is observed, a state in which it has both decayed and not decayed. Furthermore, because the cat’s survival depends on what the atom does, it would appear that the cat must also exist as a superposition of a live and a dead cat until somebody opens the box and observes it.

Links and Resources Books: So you’d like to learn more about Sacred Geometry, outside of the classroom and away from the drawing board! Here are the books I recommend to dive into the topic. They’re all great, but I’ve tried to organize them in descending order of how vociferously and often I recommend them. Quadrivium – Ed. The Spice That Prevents Fluoride From Destroying Your Brain Fluoride is found everywhere today, from antibiotics to drinking water, no stick pans to toothpaste, making exposure inevitable. All the more reason why new research proving this common spice can prevent fluoride damage is so promising! Fluoride’s neurotoxicity has been the subject of academic debate for decades, and now a matter of increasingly impassioned controversy among the general public, as well.

New Book Explains How Hugging Trees Could Actually Improve Your Health Have you hugged a tree today? No?! Well, you should, because it just might improve your health – according to a new book published this year, touching trees and being near nature could actually make you healthier and improve a wide range of health issues.