Relationship between religion and science 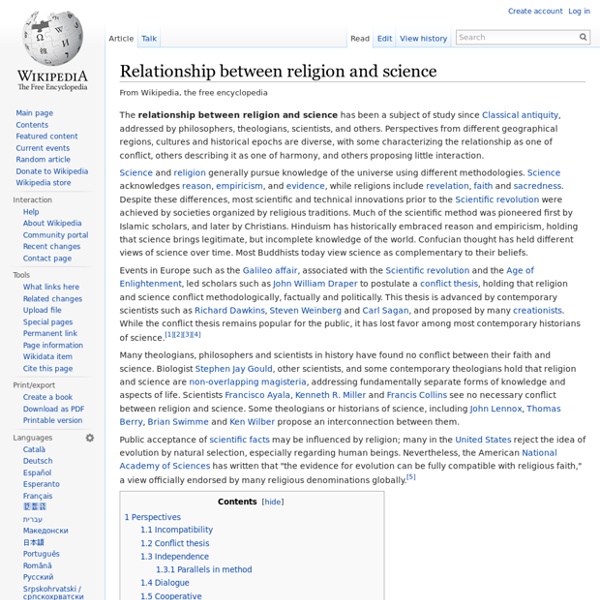 The relationship between religion and science has been a subject of study since Classical antiquity, addressed by philosophers, theologians, scientists, and others. Perspectives from different geographical regions, cultures and historical epochs are diverse, with some characterizing the relationship as one of conflict, others describing it as one of harmony, and others proposing little interaction. Science and religion generally pursue knowledge of the universe using different methodologies. Science acknowledges reason, empiricism, and evidence, while religions include revelation, faith and sacredness. Despite these differences, most scientific and technical innovations prior to the Scientific revolution were achieved by societies organized by religious traditions. Many theologians, philosophers and scientists in history have found no conflict between their faith and science. Perspectives[edit] Incompatibility[edit] Others such as Francis Collins, Kenneth R. Conflict thesis[edit] H.

The Revealer British Slang If you’re planning on visiting London in the future, you might just want to familiarise yourself with some British Slang expressions that are very commonly used by the British. They will be very useful particularly if you’re likely to be socialising with Londoners. 1. “Mind The Gap” This famous expression is always used on trains and the London Underground (Tube). 2. “Mate” is British Slang used to refer to men. 3. If something is “naff”, it is very uncool. 4. This British Slang word is not to be confused with the film of the same title where the main characters removed all their clothes for a striptease act. 5. The literal meaning is larva, but it is also another word for food. 6. “I love Pringle Crisps. 7. When the English don’t like something, but don’t want to be rude they will say: ” I’m afraid that going to nightclubs is not my cup of tea”. 8. This is another British slang word for the UK currency, the pound. 9. 10. This basically means ‘thank you’. Ciao for now. Shanthi

Improve Vision Naturally with Eye Exercises Harvard Natural Sciences Lecture Demonstrations Privacy statement for use where IP addresses are logged and analyzed for statistical purposes. The following discloses our information gathering and dissemination practices for this web site (www.sciencedemonstrations.fas.harvard.edu). Information gathering Our web server software generates logfiles of the IP addresses of computers that access this web site and of what files they access. Use of information We use your IP address and files you access to help diagnose problems with our server and to administer our Web site by identifying (1) which parts of our site are most heavily used, and (2) which portion of our audience comes from within the Harvard network. We do not link IP addresses to anything personally identifiable. Security This site has security measures in place to protect the loss, misuse and alteration of the information under our control. Contacting the Homepage This web site may contain links to other web sites. Changes to this policy Effective Date

Hebrews 11:1 Now faith is confidence in what we hope for and assurance about what we do not see. 11:1-3 Faith always has been the mark of God's servants, from the beginning of the world. Where the principle is planted by the regenerating Spirit of God, it will cause the truth to be received, concerning justification by the sufferings and merits of Christ. And the same things that are the object of our hope, are the object of our faith. It is a firm persuasion and expectation, that God will perform all he has promised to us in Christ. This persuasion gives the soul to enjoy those things now; it gives them a subsistence or reality in the soul, by the first-fruits and foretastes of them. Pulpit Commentary Verse 1. - Now faith is the substance (so A.V., with marginal readings, "or ground, or, confidence") of things hoped for, the evidence of things not seen. "Le profonde coseChe mi largiscon qui la lor parvenzaAgli occhi di laggiu son si nascose,Che l'esser lore ve in sola credenza,Sovra la qual si fondu Palta spene:E pero di sustanza prende Fintenza." It follows here, Heb 11:1-40. 1.

Grow our civilisation “Grow the economy,” “grow my business” – two phrases which have irritated a fair number of people who know the difference between a transitive and an intransitive English verb. I confess I share their displeasure, but what strikes me in this case is not the assault on an overly refined sensibility by one or two English phrases. No, what strikes me is the complete powerlessness of the people who are actually thinking about the English language – their powerlessness to have any impact whatsoever on the development of the language. Apparently the use of “grow” as a transitive verb combined with objects like “business” and “economy” dates back to a speech by Bill Clinton in 1992. “With a direct object, grow sounds natural in references to living things: grow flowers; grow wheat; grow a beard; grow antlers. There was no resistance though. What are we to say now?

The crayola-fication of the world: How we gave colors names, and it messed with our brains (part I) | Empirical Zeal “Who in the rainbow can draw the line where the violet tint ends and the orange tint begins? Distinctly we see the difference of the colors, but where exactly does the one first blendingly enter into the other? So with sanity and insanity.” Spectral Rhythm. In Japan, people often refer to traffic lights as being blue in color. Blue and green are similar in hue. One of the first fences in this color continuum came from an unlikely place – crayons. Reconstructing the rainbow. In modern Japanese, midori is the word for green, as distinct from blue. And it’s not just Japanese. (Update: Some clarifications here. I find this fascinating, because it highlights a powerful idea about how we might see the world. Imagine that you had a rainbow-colored piece of paper that smoothly blends from one color to the other. A map of color for an English speaker. But if you think about it, there’s a real puzzle here. This question was first addressed by Brent Berlin and Paul Kay in the late 1960s.