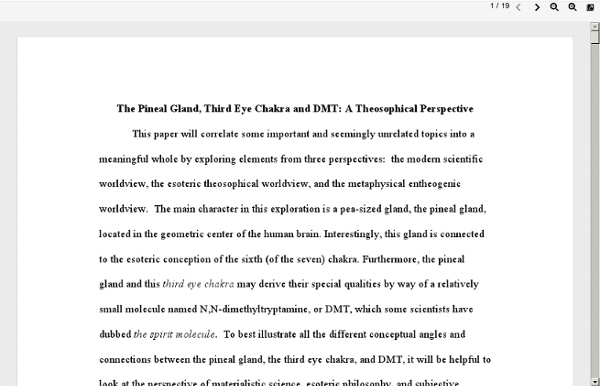 Scientific research on the pineal gland and mel... [J Pineal Res. 1996 Articles - Fluoride & the Pineal Gland: Study Published in Caries Research Fluoride & the Pineal Gland: Study Published in Caries Research International Fluoride Information Network March 27, 2001 IFIN Bulletin #269: Fluoride and the pineal gland. Luke published. Dear All, The wheels of science grind very slowly. Finally, the first half of the work that was the subject of Jennifer Luke's Ph.D. thesis; presentation in Bellingham, Washington (ISFR conference) in 1998 and a videotaped interview I had with her (see www.fluoridealert.org/videos.htm), has been published in Caries Research (see abstract below). In my view this work is of enormous importance and could be (or should be) the scientific straw that breaks the camel's back of fluoridation. The one activity that Luke is particularly interested in is the onset of puberty. When one considers the seriousness of a possible interference by fluoride on a growing child's pineal gland (and for that matter, elderly pineal glands) it underlines the recklessness of fluoridation.

The Mammalian Pineal Gland May Be The Third Eye | Pureinsight Author: Prof. Lili Feng and et al 'Modern medical dissection has already discovered that the front section of the pineal gland is equipped with the complete structure of a human eye. Because it grows inside one's skull, it is thus said to be a vestigial eye. Whether it is a vestigial eye or not, our community of cultivators has reservations. In recent years, scientists gradually discovered that the mammalian pineal gland is photo sensitive. Photic information reaches it via a multi synaptic pathway originating in retina and passing through suprachiasmatic regions of the hypothalamus (1). Five years after the publication of Zhuan Falun, Lucas et al. (5) published a paper in Science, one of the most well known scientific journals. It is well known, with neither retinal photoreceptors nor optic signal transduction pathways, that the conventional visual pathway cannot be established. On the contrary, much evidence suggests that the pineal gland may be able to directly sense the light. 1.

Pineal Gland The pineal gland, also known as the pineal body, conarium or epiphysis cerebri, is a small endocrine gland in the vertebrate brain. It produces melatonin, a serotonin derived hormone, which affects the modulation of sleep patterns in both seasonal and circadian rhythms.[1][2] Its shape resembles a tiny pine cone (hence its name), and it is located in the epithalamus, near the center of the brain, between the two hemispheres, tucked in a groove where the two halves of the thalamus join. Nearly all vertebrate species possess a pineal gland. The gland has been compared to the photoreceptive, so-called third parietal eye present in the epithalamus of some animal species, which is also called the pineal eye. Structure[edit] The pineal gland is reddish-gray and about the size of a grain of rice (5–8 mm) in humans, located just rostro-dorsal to the superior colliculus and behind and beneath the stria medullaris, between the laterally positioned thalamic bodies. Blood supply[edit] Histology[edit]

Solar Healing Center Process In the year 1962 Mother Mira of Pondicherry Ashram in India suggested to HRM that it was time to bring sungazing to the modern world. HRM then read widely and deeply for thirty long years on the sungazing practices of ancient times, which were once common all over the world with all almost all cultures and religions. Over a three year period of continual and intense experimentation on himself, he successfully established a safe sungazing practice which he is now preaching and teaching to humanity in dozens of countries worldwide. The HRM method of safe sungazing can be practiced by any one. The practitioner of safe sungazing, can also add to his practice (1) safe sun warming of the body, (2) drinking and using sun charged water, and (3) walking barefoot on bare earth with a good thick layer of warm soil/sand/dirt that is free from grass, in order to heal the body. Very little mind is in the body but the whole body is in the mind. Some Practical Observations on Sungazing