The Mammalian Pineal Gland May Be The Third Eye 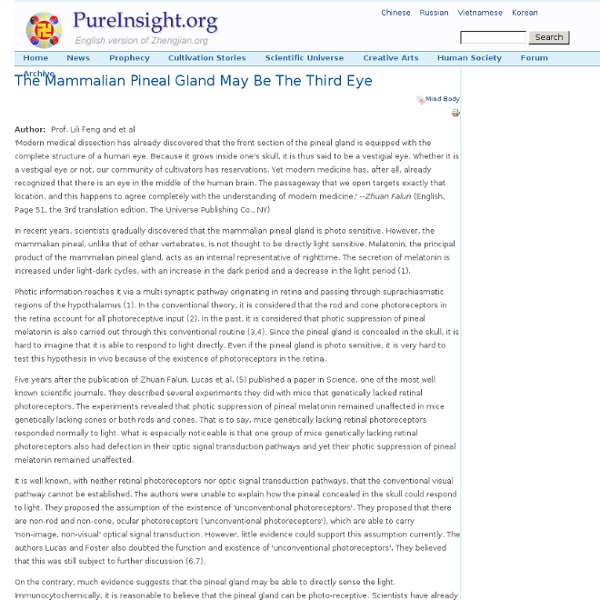 Author: Prof. Lili Feng and et al 'Modern medical dissection has already discovered that the front section of the pineal gland is equipped with the complete structure of a human eye. In recent years, scientists gradually discovered that the mammalian pineal gland is photo sensitive. Photic information reaches it via a multi synaptic pathway originating in retina and passing through suprachiasmatic regions of the hypothalamus (1). Five years after the publication of Zhuan Falun, Lucas et al. (5) published a paper in Science, one of the most well known scientific journals. It is well known, with neither retinal photoreceptors nor optic signal transduction pathways, that the conventional visual pathway cannot be established. On the contrary, much evidence suggests that the pineal gland may be able to directly sense the light. References: 1. Related:  Qi Gong - Energy Mastery

Scientific research on the pineal gland and mel... [J Pineal Res. 1996 Articles - Fluoride & the Pineal Gland: Study Published in Caries Research Fluoride & the Pineal Gland: Study Published in Caries Research International Fluoride Information Network March 27, 2001 IFIN Bulletin #269: Fluoride and the pineal gland. Luke published. Dear All, The wheels of science grind very slowly. Finally, the first half of the work that was the subject of Jennifer Luke's Ph.D. thesis; presentation in Bellingham, Washington (ISFR conference) in 1998 and a videotaped interview I had with her (see www.fluoridealert.org/videos.htm), has been published in Caries Research (see abstract below). In my view this work is of enormous importance and could be (or should be) the scientific straw that breaks the camel's back of fluoridation. The one activity that Luke is particularly interested in is the onset of puberty. When one considers the seriousness of a possible interference by fluoride on a growing child's pineal gland (and for that matter, elderly pineal glands) it underlines the recklessness of fluoridation.

Solar Healing Center Process In the year 1962 Mother Mira of Pondicherry Ashram in India suggested to HRM that it was time to bring sungazing to the modern world. HRM then read widely and deeply for thirty long years on the sungazing practices of ancient times, which were once common all over the world with all almost all cultures and religions. Over a three year period of continual and intense experimentation on himself, he successfully established a safe sungazing practice which he is now preaching and teaching to humanity in dozens of countries worldwide. This method is now accepted as a popular health practice known as the phenomenon of HRM sungazing. The HRM method of safe sungazing can be practiced by any one. The practitioner of safe sungazing, can also add to his practice (1) safe sun warming of the body, (2) drinking and using sun charged water, and (3) walking barefoot on bare earth with a good thick layer of warm soil/sand/dirt that is free from grass, in order to heal the body. 0 - 3 Months

Qigong Energy & Magnets Pineal Gland Research on 3rd Eye (Psychic Abilities) | The Living Prophecy Subpersonal chakras Subpersonal chakras are five chakras, in addition to the usual seven, that some yogis assert are located in descending order below the feet as far as about four feet (about 1.3 meters) below the feet. Earth star chakra[edit] The Earth star chakra is a chakra believed by some New Age and Neo-pagan groups to exist in line with one's spine six inches (about 40 centimeters) below the feet[1][2] (thus, one would be carrying it with oneself six inches below the surface of Earth wherever one walks, and of course six inches below oneself wherever else one goes, as for example when flying on an airplane or doing rock climbing). Other subpersonal chakras[edit] Yoga practitioner Noeli Naima of Barcelona, Spain describes a total of five chakras (four additional ones between the feet and the earth star chakra, which is described as being the lowest of the five) as being located below the Muladhara chakra. List of the five subpersonal chakras[edit] References[edit] See also[edit]

Chakra Therapy - Balancing With Colors and Sound Quantum Shaman Glossary, Toltec terms, nagualism, shamanism, vision quest The Quantum Shaman™GLOSSARY OF TERMS ABYSS - 1) The emptiness or the nothing, the absence of all things. Most people have never seen the abyss, while others think of it (erroneously) as the religious vision of "hell”. If consciousness is existence, the abyss is oblivion. 2) The hollow emptiness inside someone who has made no attempt at their own personal evolution. ALLY or ALLIES - entities who may act on behalf of a seeker. ASSEMBLAGE POINT (or AP) – The assemblage point is, first and foremost, the viewpoint through which we see our world. BELIEF SYSTEM - Any school of thought which requires belief or faith as opposed to personal experience. BLACK IRON PRISON – the overlay; the matrix; the continuum of ordinary awareness in which mortals exist until they awaken. BRUJO or BRUJA - a sorcerer. BURN WITH THE FIRE FROM WITHIN – Believed by some to be the manner in which a sorcerer, warrior or Nagual leaves this earth in order to join with the infinite. CHANNELING - see Gnosis.

Baduanjin qigong The Baduanjin qigong(八段錦) is one of the most common forms of Chinese qigong used as exercise.[1] Variously translated as Eight Pieces of Brocade, Eight-Section Brocade, Eight Silken Movements and others, the name of the form generally refers to how the eight individual movements of the form characterize and impart a silken quality (like that of a piece of brocade) to the body and its energy. The Baduanjin is primarily designated as a form of medical qigong, meant to improve health.[2] This is in contrast to religious or martial forms of qigong. However, this categorization does not preclude the form's use by martial artists as a supplementary exercise, and this practice is frequent.[2] History[edit] This exercise is mentioned in several encyclopedias originating from the Song Dynasty. The Pivot of the Way (Dao Shi, c. 1150) describes an archaic form of this qigong.[3] The Ten Compilations on Cultivating Perfection (Xiuzhen shi-shu, c. 1300) features illustrations of all eight movements.