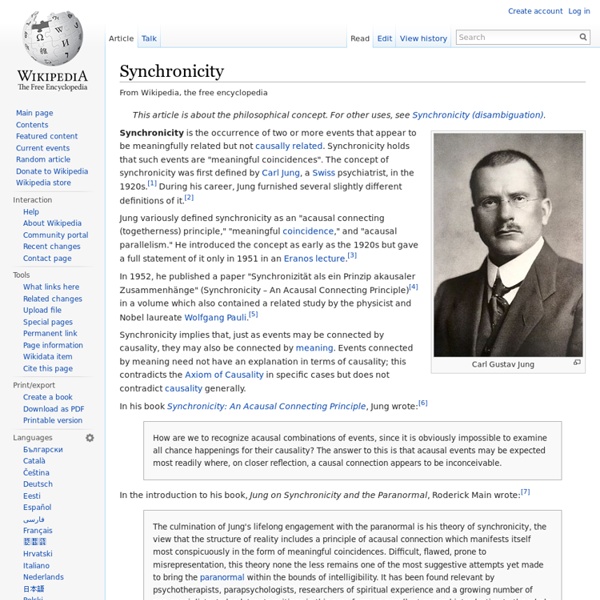 Synchronicity is the occurrence of two or more events that appear to be meaningfully related but not causally related. Synchronicity holds that such events are "meaningful coincidences". The concept of synchronicity was first defined by Carl Jung, a Swiss psychiatrist, in the 1920s.[1] During his career, Jung furnished several slightly different definitions of it.[2] Jung variously defined synchronicity as an "acausal connecting (togetherness) principle," "meaningful coincidence," and "acausal parallelism." He introduced the concept as early as the 1920s but gave a full statement of it only in 1951 in an Eranos lecture.[3] In 1952, he published a paper "Synchronizität als ein Prinzip akausaler Zusammenhänge" (Synchronicity – An Acausal Connecting Principle)[4] in a volume which also contained a related study by the physicist and Nobel laureate Wolfgang Pauli.[5] In his book Synchronicity: An Acausal Connecting Principle, Jung wrote:[6] Description[edit] Examples[edit] Criticisms[edit]

50 Questions To Help Students Think About What They Think click 2x contributed by Lisa Chesser Using the right questions creates powerful, sometimes multiple answers and discussions. Aristotle said that he asked questions in response to other people’s views, while Socrates focused on disciplined questioning to get to the truth of the matter. Ultimately questions spark imagination, conjure emotions, and create more questions. The Alien Files On April 8, 2011 the FBI unveiled the Vault, declassifying decades of top secret government documents for the first time. These documents cover topics that have plagued conspiracy theorists for the past decades. The files also contain thousands of reports of UFO sightings and alien activity. The Alien Files and The Conspiracy Files will uncover the truth of these secrect documents and offer a first hand look on the mysteries of the universe. Unsealed Files will launch in the Fall.

Misattributed quotes and their surprising originators In the course of researching the history of emotional intelligence, I stumbled across an origin story that went all the way back to Plato. The classical Greek philosopher apparently wrote, “All learning has an emotional base.” Except that he never said it, according to Christopher Golis, a coach specializing in emotional intelligence. Instead, Golis’s digging unearthed no attribution to Plato before 1997, “after which it’s copied promiscuously in various inspirational/psychological books–never with source identification–and then on to various quotation websites.” It’s easy to see how misinformation like this can spread virally, so I couldn’t help but wonder, do all those inspirational quotes we see liberally hashtagged for #MotivationMonday or #WidsomWednesday really exist?

List of unusual deaths This is a list of unusual deaths. This list includes unique or extremely rare circumstances of death recorded throughout history, noted as being unusual by multiple sources. Some of the deaths are mythological or are considered to be unsubstantiated by contemporary researchers. Oxford Dictionaries defines the word "unusual" as "not habitually or commonly occurring or done" and "remarkable or interesting because different from or better than others Culture - International Women’s Day: Iconic images of women protesters Swedish photographer Hans Runesson captured this moment on 13 April 1985 – and his image has endured since, voted Picture of the Century and resurfacing on social media in 2016 with the call to arms: “Be the woman hitting a neo-Nazi with a handbag you wish to see in the world”. Taken in Växjö, Sweden during a demonstration by the neo-Nazi Nordic Reich Party, the photo shows 38-year-old Danuta Danielsson swiping at one of the marchers with her handbag. The Polish-Swedish passerby, whose family members had reportedly been sent to a Nazi concentration camp, snapped “impulsively”, according to Runesson, who told BBC Culture that the man did “nothing – he walked further” afterwards.

Your Cosmic Horoscope 25th August 2014 (Virgo New Moon) Whether it’s your physical health or your mental stability, it’s time to clean up the act a bit and get into some routine that is actually working to keep you healthy. Yet, no conventional practice is going to cut it. The Neptune effect means you must consider the rich alternatives in exercise and healing available to you. Whether it is the inclusion of yoga into your fitness regime, or some ayurvedic medicine to help with that ailment – the emphasis now is to introduce a holistic approach to your self-maintenance program.

Why Are We Still Teaching Reading the Wrong Way? Our children aren’t being taught to read in ways that line up with what scientists have discovered about how people actually learn. It’s a problem that has been hiding in plain sight for decades. According to the National Assessment of Educational Progress, more than six in 10 fourth graders aren’t proficient readers.

A Dark Consensus About Screens and Kids Begins to Emerge in Silicon Valley SAN FRANCISCO — The people who are closest to a thing are often the most wary of it. Technologists know how phones really work, and many have decided they don’t want their own children anywhere near them. A wariness that has been slowly brewing is turning into a regionwide consensus: The benefits of screens as a learning tool are overblown, and the risks for addiction and stunting development seem high. The debate in Silicon Valley now is about how much exposure to phones is O.K.