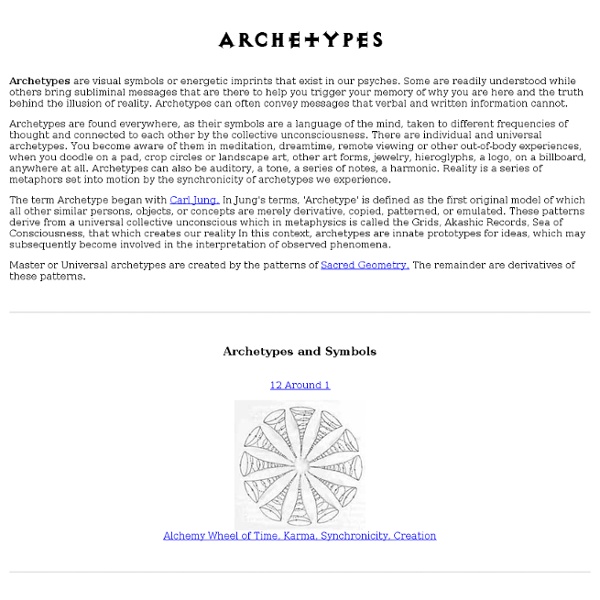 Archetypes are visual symbols or energetic imprints that exist in our psyches. Some are readily understood while others bring subliminal messages that are there to help you trigger your memory of why you are here and the truth behind the illusion of reality. Archetypes can often convey messages that verbal and written information cannot. Archetypes are found everywhere, as their symbols are a language of the mind, taken to different frequencies of thought and connected to each other by the collective unconsciousness. The term Archetype began with Carl Jung. Master or Universal archetypes are created by the patterns of Sacred Geometry. Archetypes and Symbols 12 Around 1 Alchemy Wheel of Time, Karma, Synchronicity, Creation Spirals, clockwise or counter-clockwise, Sacred Geometry Golden Mean, Phi Ratio, Movement of Consciousness Black Feathered Sun Eclipse of light and consciousness, at the end of time. Hoag's Galaxy The Eye Creation, Sacred Geometry Alchemy Amphibious Gods Zero Point Merge Time Related:  Simboli

A Visual Glossary of Symbols Sacred Geomtery: Images and Concepts The painting Sacred Geometry II is a correlation work. Its purpose is to unify ancient and contemporary concepts of form, harmony, and human consciousness. The specific concepts related in the painting: The background of the painting shades from midnight blue at its outer edges, representing the depths of space, to a more illuminated hue nearer the planet, suggesting the "noosphere"--or halo of planetary consciousness--postulated by theologian Pierre Teilhard de Chardin. The largest structure of the painting is composed of a large circle with twelve smaller circles arranged around it. Though we have several continents today, there is significant evidence that they represent large fragments of what was once a single land mass. The geometry of Stonehenge--an elaborate observatory and ceremonial site built in England over a period between 2500 and 1900 BC--is a key element of Sacred Geometry II .

Symbolic Meanings Blog by Avia Venefica » Blog Archive » By Any Other Name, It’s Still Symbolic. Meaning of the Rose Symbolic Rose Meanings The symbolic meaning of the rose is known by almost everyone on some level – otherwise it wouldn’t be the most popularly sent flower on Valentine’s Day (I know, I’m 2 weeks too late here). The rose is associated with Aphrodite (Greek) goddess of love who was often depicted adorned with roses around her head, feet and or neck. In myth we track down this association when we discover that a rose bush grew within the pool of blood spilled from Aphrodite’s slain lover (Adonis). We can interpret the symbolism here several ways. The most common interpretation is that the rose symbolizes an immortal love or a union that will never fade – even through time or death. Similarly in Christian lore, a rose bush was said to have grown at the site of Christ’s death. In addition to being a symbol of love, the rose is also representative of secrets or tacit understanding. Click here for more symbolic meaning of the rose, and other flowers Are you interested in tattoos?

Metatron’s Cube – Remarkable repository of sacred geometry – Article by Jelila « Jelila – Spiritual Retreats, Healing & Harmony in Bali How to Draw Metatron’s Cube …Free Template Light Language.. Spiritual Meaning .Join Please wait a moment for video to load! Meanwhile, Please read Article Below… Free Download of MP3 Talk on Sacred Geometry What is the meaning of Metatron’s Cube? The Angel Metatron and his amazing ‘Cube’. Abydos – Flower of life. The Fruit of Life (13 Circles) Diagram 1 & 2: superimposed on 2. The Flower of Life Diagram 2 If I told you that simply by drawing thirteen equal circles I could describe the Universe, you might be a little surprised! Mythically, Metatron was originally human, elevated to archangel by God for his services as scribe. The Flower of Life (A specific regular repeating pattern of circles rotating around a central point) contains a vast Akashic system of information (kind of, short hand for the entire planet’s memory), including templates for the five Platonic Solids – Key Sacred Shapes which are the building blocks of creation. A Crop Circle Sacred Geometry Light Language? Plato Jelila

Text Symbols (and special characters) Zeus, Apollo, Hermes, Jesus, 8880 Ancient Greek mythology personified the mysteries of life and the cosmos in the form of a pantheon of gods who ruled from Mount Olympus. Their most powerful god who controlled the sky and weather was named Zeus. Apollo was the son of Zeus and Leto and the twin of the goddess Artemis. He is sometimes personified as the sun driving a fiery chariot across the sky each day. Hermes, the little brother of Apollo, was personified as Mercury, the planet closest to the sun. On a higher level, Zeus, Apollo, and Hermes were also mathematical metaphors. The length of the red line BB by computation is equal to the gematria value of Zeus (612). The diameter AA of the green circle is exactly equal to the gematria value of Apollo (1061). The diameter of each of the three bright yellow circles is equal to the gematria value of Hermes (353). The .666 decimal remainder of the gematria value of Hermes brings out his solar nature through the sum of the numbers that form the magic square of the sun.

The Fine Art of Italian Hand Gestures: A Vintage Visual Dictionary by Bruno Munari by Maria Popova A pocket guide to Neapolitan nonverbal communication. Somewhere between his seminal manifestos on design as art and his timelessly delightful children’s books, legendary Italian artist and graphic designer Bruno Munari made time for a number of idiosyncratic side projects. In the short preface, Munari notes the globalization of nonverbal vernacular, as Neapolitan gestures begin being recognized worldwide and American imports like “OK” permeate Italian culture, then promises: We have collected a good many gestures, leaving aside vulgar ones, in order to give an idea of their meaning to foreigners visiting Italy and as a supplement to an Italian dictionary. Old Neapolitan gestures, from left to right: money, past times, affirmation, stupid, good, wait a moment, to walk backward, to steal, horns, to ask for. Another illustrated page of the book of Canon Andrea de Jorio. Gestures of drinking and eating (from an old Neapolitan print) 'You make a mockery of the 'madam'!'

Astrology Answers Free Mini-Reading for Troy parker The sign that is on the eastern horizon at the moment of birth is called the Rising Sign or the Ascendant. The Ascendant marks the difference in temperament, disposition, physical appearance and personality of individuals. It is the lens through which everything else in the chart is focused or looked through, thus coloring the way we look at everything. People see us through our rising sign and we see the world through our rising sign. PISCES risingPeople with Pisces rising tend to be sensitive, compassionate, empathic, weak-willed, long-suffering, day-dreamy, procrastinating, plastic, impressionable, impractical, indecisive, psychic, sentimental, romantic, idealistic, affectionate, easy-going, lazy, not concerned with the practical day-to-day affairs of life, absent-minded, and in search for the Holy Grail. At times you are too absent from focused awareness of the present. They generally do not tackle anything straight away, but always from the flank.