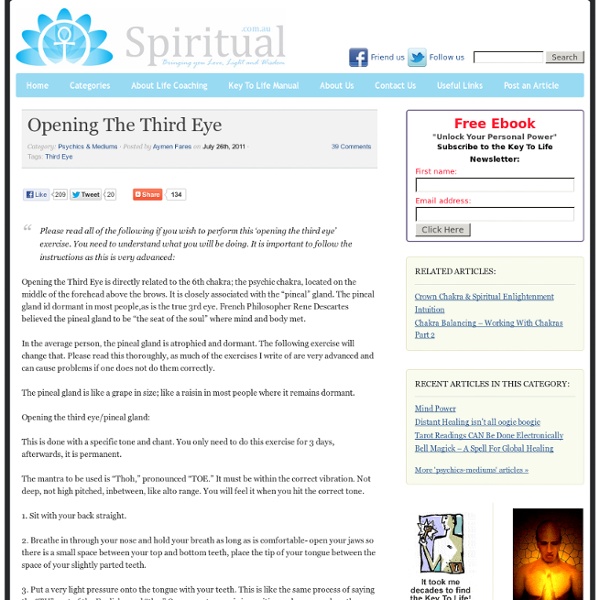 Please read all of the following if you wish to perform this ‘opening the third eye’ exercise. You need to understand what you will be doing. It is important to follow the instructions as this is very advanced: Opening the Third Eye is directly related to the 6th chakra; the psychic chakra, located on the middle of the forehead above the brows. It is closely associated with the “pineal” gland. The pineal gland id dormant in most people,as is the true 3rd eye. In the average person, the pineal gland is atrophied and dormant. The pineal gland is like a grape in size; like a raisin in most people where it remains dormant. Opening the third eye/pineal gland: This is done with a specific tone and chant. The mantra to be used is “Thoh,” pronounced “TOE.” 1. 2. 3. 4. 5. 1. 2. This is a very powerful exercise and as with all powerful practices, your body will go through discomfort in order to adapt. Authors Details: Web Site

How to Decalcify and Detoxify the Pineal Gland Anna Hunt, Staff WriterWaking Times The pineal gland, an endocrine gland located in the brain, is said to be the seat of the soul. Also referred to as the Third Eye, this small gland is believed to be involved in reaching higher levels of consciousness, acting as a gateway to dimensions beyond our brain-created reality. To learn more about the pineal gland, see: What is the Pineal Gland? For the people that seek to fully activate their spiritual potential and tap into the power of the pineal gland, one must begin by strengthening its function though detoxification and proper nutrition. Researchers are finding that in many people, due to our poor diet with pesticide and chemical-laden foods and environmental toxins such as fluoride in our water, the pineal gland and our entire bodies are becoming exposed to many more toxins and nano-organisms than ever before.

Starseed-Lynx Indigos and Starseeds have been incarnating on the planet for a very long time and you might be one, your parent or grandparent or even your great, great grandparent may have been an Indigo or a Starseed. Anger "It is natural for the immature to harm others. Getting angry with them is like resenting a fire for burning." Shantideva BEGINNER'S GUIDE ... © 1995 Dharman Craig PressonAll Rights Reserved “Zen is not what you think!” -- anonymous Preface The purpose of this little book is to assure that all studentsunderstand the mechanics of Zen practice and the basic teachings ofBuddhism. The descriptions of practices have been generalized, andparticular schools have adopted variations. Design Daily: Are Minimalist Brands the Future? - Design When these "minimalist brands" started popping up on the A2591 blog a few weeks ago, they seemed like a fun design exercise. The designers simply reduced familiar packaging to its bare essentials, taking colors and graphics away in a dramatic, three-step reveal. Some of the brands look especially sharp when reduced to a bare-bones execution; others are reduced to an almost unrecognizable state without their cascading milk falls or sides of sliced fruit. These seem like products stocked in some fantasyland grocery store patronized exclusively by anal-retentive designers, but as I started to look at some recent rebranding stories, I'd argue that the minimal trend is actually infiltrating the market faster than we think. Remember the outcry over the new Pepsi branding?

Human Cells have Electric Fields as Powerful as Lighting Bolts -A Galaxy Insight Using newly developed voltage-sensitive nanoparticles, researchers have found that the previously unknown electric fields inside of cells are as strong, or stronger, as those produced in lightning bolts. Previously, it has only been possible to measure electric fields across cell membranes, not within the main bulk of cells, so scientists didn't even know cells had an internal electric field. This discovery is a surprising twist for cell researchers.

More Déjà Vu Theories" The Hologram Theory Dutch psychiatrist Hermon Sno proposed the idea that memories are like holograms, meaning that you can recreate the entire three-dimensional image from any fragment of the whole. The smaller the fragment, however, the fuzzier the ultimate picture. Déjà vu, he says, happens when some detail in the environment we are currently in (a sight, sound, smell, et cetera) is similar to some remnant of a memory of our past and our brain recreates an entire scene from that fragment. Other researchers also agree that some small piece of familiarity may be the seed that creates the déjà vu feeling.

Native American Code Of Ethics I recently found these Native American code of ethics - I am unsure of where this originated and of it’s accuracy. Regardless of where it originated, I like it and I wanted to pass it on. So much common sense, a great respect for the earth and everything that calls it home. I’m a big nature and animal lover so of course I’m posting it.