EMF Project Scientific Articles. 10 Theories And Facts You Didn't Know About Gravity. Our relationship with gravity takes each of us back to about first grade, when we initially learned about this amazing force. 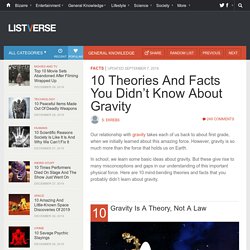 However, gravity is so much more than the force that holds us on Earth. In school, we learn some basic ideas about gravity. But these give rise to many misconceptions and gaps in our understanding of this important physical force. Here are 10 mind-bending theories and facts that you probably didn’t learn about gravity. 10 Gravity Is A Theory, Not A Law It is a myth that gravity is a scientific law. When we think about gravity using the definitions of scientific laws and theories, it becomes clear why gravity is a theory and not a law. Voyager 1 (a man-made space probe) has traveled approximately 21 billion kilometers (13 billion mi) from Earth. 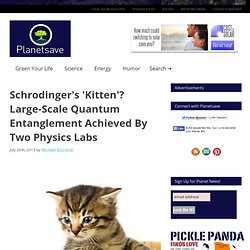 How Much Should Expectation Drive Science? In December 2015, particle physicists were buzzing with excitement: The Standard Model—which has dominated physics for 40 years and defines the basic constituents of matter and how they interact—had a new challenger. 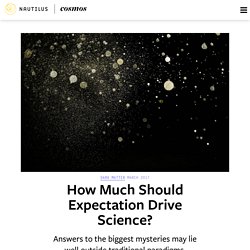 At the Large Hadron Collider in Switzerland, physicists announced evidence of what appeared to be a new particle. Known colloquially as the “diphoton bump,” the new particle promised to upend the Standard Model, which doesn’t predict its existence. A New Spin on the Quantum Brain. Chaos Theory: A Brief Introduction. What exactly is chaos? The name "chaos theory" comes from the fact that the systems that the theory describes are apparently disordered, but chaos theory is really about finding the underlying order in apparently random data. When was chaos first discovered? The first true experimenter in chaos was a meteorologist, named Edward Lorenz.

In 1960, he was working on the problem of weather prediction. He had a computer set up, with a set of twelve equations to model the weather. Figure 1: Lorenz's experiment: the difference between the starting values of these curves is only .000127. When he came back an hour later, the sequence had evolved differently. The Spooky World Of Quantum Biology. Michael Garfield The new science of quantum biology is teaching us about how the actual behavior of evolution is governed by disconcertingly spooky processes – time travel being one of them. 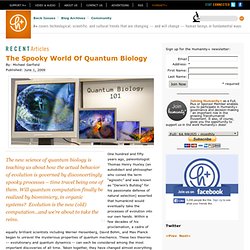 Will quantum computation finally be realized by biomimicry, in organic systems? Evolution is the new (old) computation...and we're about to take the reins. One hundred and fifty years ago, paleontologist Thomas Henry Huxley (an autodidact and philosopher who coined the term “agnostic” and was known as “Darwin’s Bulldog” for his passionate defense of natural selection) asserted that humankind would eventually take the processes of evolution into our own hands. Research Projects - Quantum Biology. Quantum Biology and the Puzzle of Coherence. One of the more exciting discoveries in biology in the last few years is the role that quantum effects seem to play in many living systems. 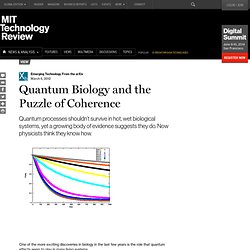 The two most famous examples are in bird navigation, where the quantum zeno effect seems to help determine the direction of the Earth’s magnetic field, and in photosynthesis, where the way energy passes across giant protein matrices seems to depend on long-lasting quantum coherence. Despite the growing evidence in these cases, many physicists are uneasy, however. Human Cells have Electric Fields as Powerful as Lighting Bolts -A Galaxy Insight.

Using newly developed voltage-sensitive nanoparticles, researchers have found that the previously unknown electric fields inside of cells are as strong, or stronger, as those produced in lightning bolts. 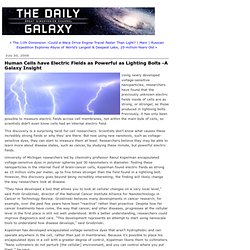 Previously, it has only been possible to measure electric fields across cell membranes, not within the main bulk of cells, so scientists didn't even know cells had an internal electric field. This discovery is a surprising twist for cell researchers. Scientists don't know what causes these incredibly strong fields or why they' are there.

But now using new nanotools, such as voltage-sensitive dyes, they can start to measure them at least. Researchers believe they may be able to learn more about disease states, such as cancer, by studying these minute, but powerful electric fields. Quantum 'weirdness' used by plants, animals - Technology & Science. Birds like the European robin have an internal compass which appears to make use of a phenomenon called quantum entanglement. 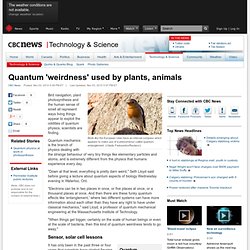 ((Vasily Fedosenko/Reuters)) Bird navigation, plant photosynthesis and the human sense of smell all represent ways living things appear to exploit the oddities of quantum physics, scientists are finding. Quantum mechanics is the branch of physics dealing with the strange behaviour of very tiny things like elementary particles and atoms, and is extremely different from the physics that humans experience every day. You’re powered by quantum mechanics. No, really… Every year, around about this time, thousands of European robins escape the oncoming harsh Scandinavian winter and head south to the warmer Mediterranean coasts. 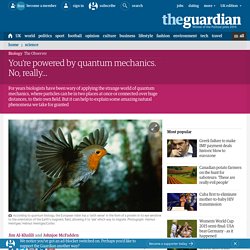 How they find their way unerringly on this 2,000-mile journey is one of the true wonders of the natural world. For unlike many other species of migratory birds, marine animals and even insects, they do not rely on landmarks, ocean currents, the position of the sun or a built-in star map. Instead, they are among a select group of animals that use a remarkable navigation sense – remarkable for two reasons. Unusual quantum effect discovered in earliest stages of photosynthesis. Quantum physics and plant biology seem like two branches of science that could not be more different, but surprisingly they may in fact be intimately tied. 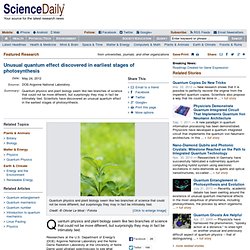 Researchers at the U.S. Department of Energy's (DOE) Argonne National Laboratory and the Notre Dame Radiation Laboratory at the University of Notre Dame used ultrafast spectroscopy to see what happens at the subatomic level during the very first stage of photosynthesis. New evidence that plants get their energy using quantum entanglement. The fact that biological systems can exploit quantum effects is quite astounding. 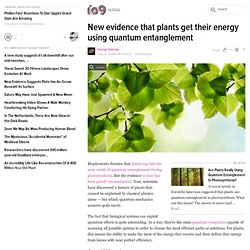 No it is not, not even remotely.There is literally no possible way that photosynthesis could take place without involving quantum physics. Singing Plants at Damanhur. New Book Explains How Hugging Trees Could Actually Improve Your Health. Have you hugged a tree today? No?! Well, you should, because it just might improve your health – according to a new book published this year, touching trees and being near nature could actually make you healthier and improve a wide range of health issues. In Blinded by Science, author Matthew Silverstone says he has proven that the vibrational energy of trees and plants gives us health benefits. Although it might feel a little hokey at first, hugging a tree sounds like a much better prescription than drugs and pills from your doctor.

Silverstone wrote Blinded By Science to prove scientifically that the ways in which we live have a damaging effect on our health. So how exactly does this happen? Sounds like a good deal to us. . + Blinded By Science Via Natural News. Quantum weirdness is everywhere in the living world. The point of the most famous thought-experiment in quantum physics is that the quantum world is different from our familiar one. Imagine, suggested the Austrian physicist Erwin Schrödinger, that we seal a cat inside a box. Scientists Achieve Quantum Teleportation. One of the hurdles to teleportation has been overcome, with the reliable movement of quantum information between two objects separated by a short distance.

The achievement is still a very, very long way from the movements familiar from science fiction, but strengthens our confidence in the theory of quantum entanglement, one of the most controversial aspects of modern physics. It may, moreover, assist the much closer goal of quantum computing. Certain subatomic particles always exist in paired states. For example, two electrons may have opposite spins. Gravitational-wave finding causes 'spring cleaning' in physics. Detlev van Ravenswaay/Science Photo Library Artist's rendering of 'bubble universes' within a greater multiverse — an idea that some experts say was bolstered with this week's discovery of gravitational waves. On 17 March, astronomer John Kovac of the Harvard-Smithsonian Center for Astrophysics presented long-awaited evidence of gravitational waves — ripples in the fabric of space — that originated from the Big Bang during a period of dramatic expansion known as inflation.

By the time the Sun set that day in Cambridge, Massachusetts, the first paper detailing some of the discovery’s consequences had already been posted online1, by cosmologist David Marsh of the Perimeter Institute for Theoretical Physics in Waterloo, Canada, and his colleagues. Cosmologist Marc Kamionkowski of Johns Hopkins University in Baltimore, Maryland, agrees that some axion models no longer work, “because they require inflation to operate at a lower energy scale than the one indicated by BICEP2”. Researchers find a way to keep quantum memory and logic in synch - Zeroth - 0th. TESLA Series Technologies. The all new TESLA Series cables combine three revolutionary technologies based on the work of Nikola Tesla – the Tesla Tricon cable geometry, Zero Capacitance Active Shielding, and a proprietary Patent Pending conditioning process in a new line of cables that are smaller and more flexible than our previous models with significantly higher performance and value.

TESLA Cables allow you to hear deeper into recordings with detail that’s transparent and non-fatiguing. In fact starting at the Accelerator interconnect and speaker cable level, TESLA Cables outperform every cable we have ever pitted them against regardless of price. Quantum Mind.fully. Inattentional blindness. Physics and Consciousness our Quantum Interconnectedness by StarStuffs. Does DNA Emit Light? Dan Eden for viewzone.com An incredible story! A Lazy Layman's Guide to Quantum Physics. Artificially Intelligent.