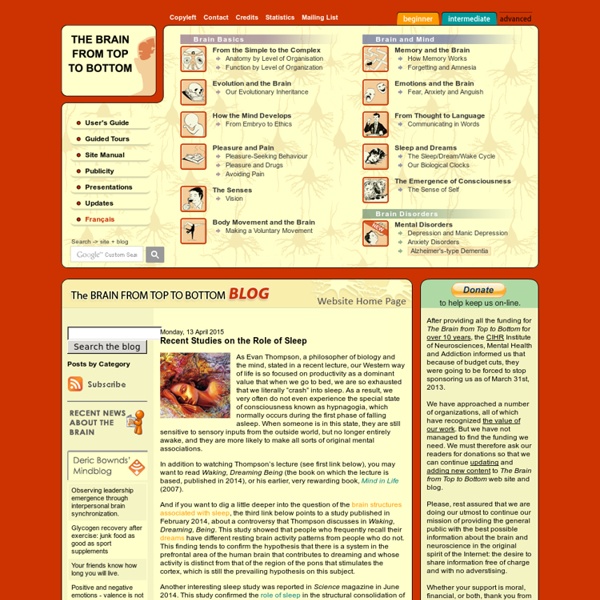 Holy Ignorance by Garry Wills When a Republican politician, asked about climate change, says, “I’m not a scientist,” most of us hear just a cowardly way of dodging the question; but the politician’s supporters hear a brave defiance of an alien force. When we hear only “science,” they hear “godless science,” the kind that wants to rob them of their belief in creation and force evolution into their minds. That science is marching in a battalion of forces—the media, the academy, the government—that has them besieged. “I’m not a scientist” does not mean, “I have not heard enough about the science, and need to hear more,” but “I know the evil intent or effect of science, and I will not let it affect me.” They summon a courage not to know. Now Pope Francis, with his encyclical on climate change, has introduced a concern for the poor into the environmental discussion.

Teenage Brains Although you know your teenager takes some chances, it can be a shock to hear about them. One fine May morning not long ago my oldest son, 17 at the time, phoned to tell me that he had just spent a couple hours at the state police barracks. Apparently he had been driving "a little fast." What, I asked, was "a little fast"? Build Your Own Brain Gym: 100 Tools, Exercises, and Games Posted by Site Administrator in Health Tools May 28th, 2009 By Meredith Walker Stay on top of your game mentally and slow the effects of aging on your brain by keeping it in excellent shape. It’s easy to do and costs little to no money with all the resources available on the Internet. The following tools, exercises, and games will stimulate your brain and give it the exercise it needs to stay in top form.

Brain Surface and Tractography Viewer Surface Opacity: Surface Overlay Display Range: Histogram Min: Max: Minimum Track Length: The pial surface is the "outer" cortical surface and represents the boundary between gray matter and cerebrospinal fluid. Typically, it is the surface that comes to mind when visually thinking of a brain. The gray matter is usually only a few millimeters thick and plays a key role in higher functioning and consciousness. Everybody Jump What would happen if everyone on earth stood as close to each other as they could and jumped, everyone landing on the ground at the same instant? —Thomas Bennett (and many others) This is one of the most popular questions submitted to this blog. It’s been examined before, including by a ScienceBlogs post and a Straight Dope article. They cover the kinematics pretty well.

Dairy products in adult diets improve cognitive function Adults who consume dairy products at least once daily have higher cognitive function than those who rarely or never drink milk or eat dairy foods, according to a new study by researchers from the University of South Australia and University of Maine. Those who consumed the most dairy products had the highest scores in an extensive cognitive test battery that included multiple measures of visual-spatial ability, verbal memory, working memory, reasoning ability and executive functioning (the ability to plan, organize and integrate cognitive functions). Those who seldom or never consumed dairy performed lower than average for this study population. The research was led by doctoral student in nutrition and psychology Georgina Crichton of the University of South Australia, in collaboration with UMaine psychologist/epidemiologist Merrill “Pete” Elias, and psychologists Michael Robbins and Gregory Dore.

JCESOM Radiology Library The practice of medicine now requires physicians to understand and interpret digital images of body structure obtained by CT, MRI and ultrasound. Imaging technology has made major advances in increasing resolution and flexibility in visualization and three-dimensional reconstruction of the human body. The rapid expansion of digital data bases and systems has brought those images to the computers of doctors' offices. Interpretation of digital images requires detailed training in the anatomical sciences and is no longer limited to specialists. . To address these issues, faculty of the Department of Anatomy and Pathology and the Department of Radiology have assembled a data base of images for study and review by medical students, faculty and health professionals.

Lateral Thinking Puzzles Lateral thinking puzzles that challenge your preconceptions. 1. You are driving down the road in your car on a wild, stormy night, when you pass by a bus stop and you see three people waiting for the bus: 1. An old lady who looks as if she is about to die. 2. An old friend who once saved your life. 3.

Asteroid-bound spacecraft gets its first scientific instrument NASA has begun attaching scientific instruments to the OSIRIS-REx probe, just over a year before it starts making its way to asteroid Bennu. The first instrument to arrive at Lockheed Martin's HQ is Arizona State University's microwave-sized device called OSIRIS-REx Thermal Emission Spectrometer or OTES. It's designed switch on shortly after the spacecraft begins its two-year journey to Bennu, and to take the near-Earth asteroid's temperature every two seconds once it arrives. The instrument, which has undergone development and testing these past few years, will also scan the celestial body's surface to map minerals and chemicals. OTES is but one of the five instruments that the team is slated to install aboard the OSIRIS-REx before it takes off in September 2016. There's also the OSIRIS-REx Camera Suite (OCAMS) built by a team from the University of Arizona, which will use its three cameras to image Bennu as the spacecraft approaches.

Chapter 9: Limbic System The limbic system is a convenient way of describing several functionally and anatomically interconnected nuclei and cortical structures that are located in the telencephalon and diencephalon. These nuclei serve several functions, however most have to do with control of functions necessary for self preservation and species preservation. They regulate autonomic and endocrine function, particularly in response to emotional stimuli. They set the level of arousal and are involved in motivation and reinforcing behaviors. Additionally, many of these areas are critical to particular types of memory.