Will Work For Free 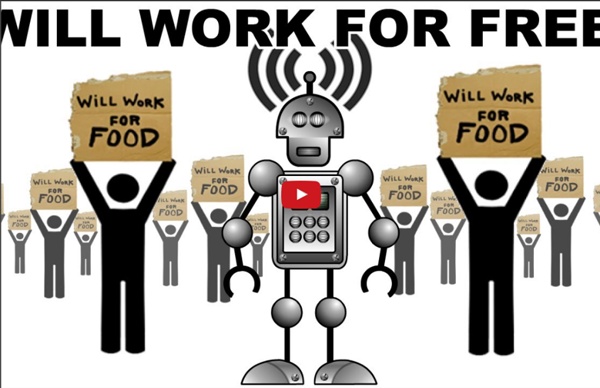 Switched Mode Power Conversion Course, IISc Bangalore Electrical Engineering Video Tutorials, V. Ramanarayanan SEE: Guide to Download NPTEL Video Lecture Lecture Details : Switched Mode Power Conversion by Prof. V. The Rich and Their Robots Are About to Make Half the World's Jobs Disappear Two hugely important statistics concerning the future of employment as we know it made waves recently: 1. 85 people alone command as much wealth as the poorest half of the world. 2. 47 percent of the world's currently existing jobs are likely to be automated over the next two decades. Combined, those two stats portend a quickly-exacerbating dystopia.

A smart-object recognition algorithm that doesn’t need humans (Credit: BYU Photo) BYU engineer Dah-Jye Lee has created an algorithm that can accurately identify objects in images or video sequences — without human calibration. “In most cases, people are in charge of deciding what features to focus on and they then write the algorithm based off that,” said Lee, a professor of electrical and computer engineering.

Advanced Electric Drives Course, IIT Kanpur Electrical Engineering Video Tutorials, S.P. Das SEE: Guide to Download NPTEL Video Lecture Lecture Details : Advanced Electric Drives by Dr. Google buys AI firm DeepMind to boost image search - tech - 27 January 2014 Google's shopping spree is far from over. Today the firm confirmed it has purchased DeepMind Technologies, a machine-learning company based in London, for $400 million. The acquisition of the AI firm follows Google's purchase of eight advanced robotics companies in December and the smart thermostat maker Nest Labs earlier this month. It is not hard to see why Google might be interested. How to Grow a Medicinal Food Forest Course Overview Anyone with a patch of land can grow a food forest! A food forest, or forest garden, is a gardening technique that mimics a forest ecosystem but substitutes in edible trees, shrubs, perennials and annuals. A medicinal food forest has the additional benefit of producing medicinal botanicals.

Google Officially Enters the Robotics Business With Acquisition of Seven Startups Last year, I visited a warehouse behind a typically fashionable San Francisco café where two startups, Bot & Dolly and Autofuss, were busy making the insanely immersive visuals for the film Gravity (among a host of other projects) using naught but assembly line robots, clever software, and high-def cameras. A few months later, I found myself in another warehouse—this time some forty minutes south of the city—where robotic arms, built and programmed by Industrial Perception, used advanced computer vision to sort toys and throw around boxes. What do these companies have in common? Industrial Perception robotic arm uses computer vision to move boxes.

Vertical farms sprouting all over the world - tech - 16 January 2014 Leader: "Fruit and veg, fresh from the skyscraper" URBAN warehouses, derelict buildings and high-rises are the last places you'd expect to find the seeds of a green revolution. But from Singapore to Scranton, Pennsylvania, "vertical farms" are promising a new, environmentally friendly way to feed the rapidly swelling populations of cities worldwide. In March, the world's largest vertical farm is set to open up shop in Scranton. Built by Green Spirit Farms (GSF) of New Buffalo, Michigan, it will only be a single storey covering 3.25 hectares, but with racks stacked six high it will house 17 million plants. And it is just one of a growing number.

Possibility of cloning quantum information from the past Popular television shows such as "Doctor Who" have brought the idea of time travel into the vernacular of popular culture. But problem of time travel is even more complicated than one might think. LSU's Mark Wilde has shown that it would theoretically be possible for time travelers to copy quantum data from the past. It all started when David Deutsch, a pioneer of quantum computing and a physicist at Oxford, came up with a simplified model of time travel to deal with the paradoxes that would occur if one could travel back in time. For example, would it be possible to travel back in time to kill one's grandfather? In the Grandfather paradox, a time traveler faces the problem that if he kills his grandfather back in time, then he himself is never born, and consequently is unable to travel through time to kill his grandfather, and so on.