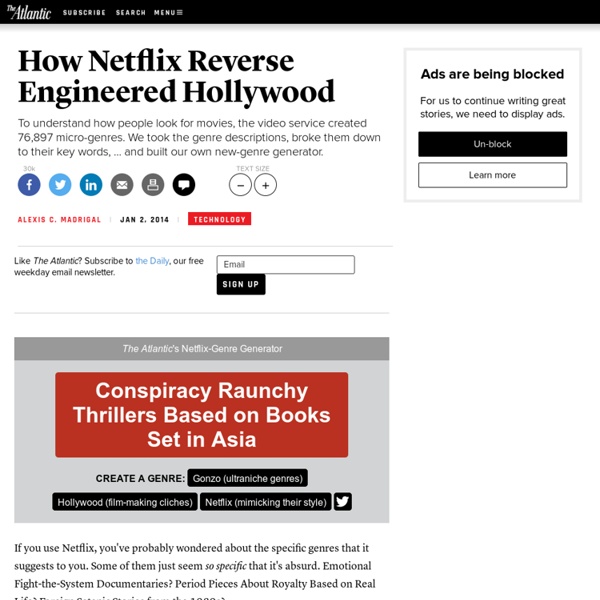 If you use Netflix, you've probably wondered about the specific genres that it suggests to you. Some of them just seem so specific that it's absurd. Emotional Fight-the-System Documentaries? Period Pieces About Royalty Based on Real Life? Foreign Satanic Stories from the 1980s? If Netflix can show such tiny slices of cinema to any given user, and they have 40 million users, how vast did their set of "personalized genres" need to be to describe the entire Hollywood universe? This idle wonder turned to rabid fascination when I realized that I could capture each and every microgenre that Netflix's algorithm has ever created. Through a combination of elbow grease and spam-level repetition, we discovered that Netflix possesses not several hundred genres, or even several thousand, but 76,897 unique ways to describe types of movies. There are so many that just loading, copying, and pasting all of them took the little script I wrote more than 20 hours. Imaginary movies for an imaginary genre.

Improbable research: The Limerick laureate works his magic In 2003, an independent scholar from New Jersey began submitting limericks for a competition in mini-AIR, the monthly online supplement to my magazine, Annals of Improbable Research. The contest challenges readers to read an off-putting scholarly citation, and explain it in limerick form. Martin Eiger so consistently won that we eventually banned him as an unfair competitor, gave him the title Limerick laureate, and now publish him every month. He handles a huge range of subject matter. An early Eiger limerick summarised a Japanese study called Pharmacological Aspects of Ipecac Syrup (TJN-119) - Induced Emesis in Ferrets:

Before You See 'The Counselor': Watch 1977 Film 'The Gardener's Son,' Cormac McCarthy's First Produced Script While there's still no sign of Ridley Scott's "The Counselor" at either Venice, Toronto or New York (perhaps it'll pop up in Telluride?), the anticipation for the film still remains very high. Not only does it feature a ridiculous cast (Brad Pitt, Michael Fassbender, Javier Bardem, Penelope Cruz, Cameron Diaz and more), it also has a script from one of America's literary titans, Cormac McCarthy. This is something written directly for the screen, not an adaption of a book, but as hardcore fans know, this isn't the first script he's written.

Stanford Prison Exp What happened in the basement of the psych building 40 years ago shocked the world. How do the guards, prisoners and researchers in the Stanford Prison Experiment feel about it now? It began with an ad in the classifieds. Male college students needed for psychological study of prison life. $15 per day for 1-2 weeks. More than 70 people volunteered to take part in the study, to be conducted in a fake prison housed inside Jordan Hall, on Stanford's Main Quad. 50 Best Horror Movies of All Time Come on in, the blood's fine Horror movies aren’t for everyone. You’ve heard it a million times, or else you’ve said it a million times: “I just don’t like them”. Oh really? You don’t like The Shining or The Exorcist or Planet Terror or Psycho? Those are horror movies, jacko, and you like them.

Walking Through Doorways Causes Forgetting We’ve all experienced it: The frustration of entering a room and forgetting what we were going to do. Or get. Or find. New research from University of Notre Dame Psychology Professor Gabriel Radvansky suggests that passing through doorways is the cause of these memory lapses. “Entering or exiting through a doorway serves as an ‘event boundary’ in the mind, which separates episodes of activity and files them away,” Radvansky explains. “Recalling the decision or activity that was made in a different room is difficult because it has been compartmentalized.”

635 Free Movies Online: Great Classics, Indies, Noir, Westerns, etc. Watch 4,000+ movies free online. Includes classics, indies, film noir, documentaries and other films, created by some of our greatest actors, actresses and directors. The collection is divided into the following categories: Comedy & Drama; Film Noir, Horror & Hitchcock; Westerns (many with John Wayne); Martial Arts Movies; Silent Films; Documentaries, and Animation. Free Comedy & Dramas Shock study, replicates Milgram's findings Nearly 50 years after the controversial Milgram experiments, social psychologist Jerry M. Burger, PhD, has found that people are still just as willing to administer what they believe are painful electric shocks to others when urged on by an authority figure. Burger, a professor at Santa Clara University, replicated one of the famous obedience experiments of the late Stanley Milgram, PhD, and found that compliance rates in the replication were only slightly lower than those found by Milgram. And, like Milgram, he found no difference in the rates of obedience between men and women. "People learning about Milgram's work often wonder whether results would be any different today," Burger says.

Soviet Animations of Ray Bradbury Stories: 'Here There Be Tygers' & 'There Will Comes Soft Rain' Sergei Bondarchuk directed an 8-hour film adaptation of War and Peace (1966-67), which ended up winning an Oscar for Best Foreign Picture. When he was in Los Angeles as a guest of honor at a party, Hollywood royalty like John Wayne, John Ford, Billy Wilder lined up to meet the Russian filmmaker. But the only person that Bondarchuk was truly excited to meet was Ray Bradbury. Bondarchuk introduced the author to the crowd of bemused A-listers as “your greatest genius, your greatest writer!” Stability and Change in Children's Intelligence Quotient Scores: A Comparison of Two Socioeconomically Disparate Communities + Author Affiliations Received November 16, 2000. Accepted May 11, 2001. Abstract

The 10 Food Documentaries Every Guy Should See Before you sit down with any of these movies, it’s highly recommended you get a bowl of popcorn, plenty of Milk Duds, and perhaps a ribeye steak or two. Basically, you’re going to be hungry. But besides making you salivate, each film will spin the tale of some interesting corner of the culinary world. While there are a ton of great food documentaries out there that deal with the issues of our modern food system and our unhealthy diets, we chose to focus on simply unique stories. Here are 10 you should see.

5 Experts Answer: Can Your IQ Change? Each week, MyHealthNewsDaily asks the experts to answer questions about your health. This week, we asked psychologists: Can your IQ ever change? Jack Naglieri, research professor at University of Virginia: The answer to this question, like many others, depends on a number of factors. If you look at the research where they've made people smarter (i.e. improved their IQs), what they're really doing is to make people function better.

Alain Badiou: Cinema (2010/2013) For Alain Badiou, films think, and it is the task of the philosopher to transcribe that thinking. What is the subject to which the film gives expressive form? This is the question that lies at the heart of Badiou’s account of cinema. He contends that cinema is an art form that bears witness to the Other and renders human presence visible, thus testifying to the universal value of human existence and human freedom. Through the experience of viewing, the movement of thought that constitutes the film is passed on to the viewer, who thereby encounters an aspect of the world and its exaltation and vitality as well as its difficulty and complexity. Cinema is an impure art cannibalizing its times, the other arts, and people – a major art precisely because it is the locus of the indiscernibility between art and non-art.

Lewis Terman (1877–1956) - Testing, Stanford, Gifted, and Intelligence Lewis M. Terman was a psychologist who developed some of the earliest and most successful measures of individual differences. He was raised on an Indiana farm and, after an early career as a schoolteacher and high school principal, received his doctorate in psychology from Clark University in 1905. After four years of teaching pedagogy at the Los Angeles State Normal School, he joined the education faculty at Stanford University in 1910. In 1922 he became head of Stanford's Psychology Department, a position he held until his retirement in 1942. At Stanford, Terman followed up his doctoral research on mental testing by working on a revision of Alfred Binet's 1905 scale of intelligence.