Why Anti-Authoritarians are Diagnosed as Mentally Ill 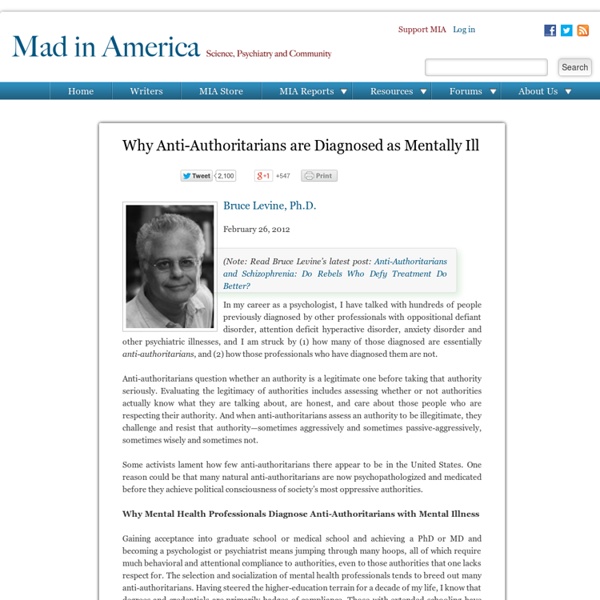 (Note: Read Bruce Levine’s latest post: Anti-Authoritarians and Schizophrenia: Do Rebels Who Defy Treatment Do Better? In my career as a psychologist, I have talked with hundreds of people previously diagnosed by other professionals with oppositional defiant disorder, attention deficit hyperactive disorder, anxiety disorder and other psychiatric illnesses, and I am struck by (1) how many of those diagnosed are essentially anti-authoritarians, and (2) how those professionals who have diagnosed them are not. Anti-authoritarians question whether an authority is a legitimate one before taking that authority seriously. Evaluating the legitimacy of authorities includes assessing whether or not authorities actually know what they are talking about, are honest, and care about those people who are respecting their authority. Some activists lament how few anti-authoritarians there appear to be in the United States. Why Mental Health Professionals Diagnose Anti-Authoritarians with Mental Illness

P2PU How we test ideas about learning. Current projects Use the drop down list above to see all current projects. Here are a few examples: The Citizen Science project makes scientific ideas and practice accessible to everyone.The Open Masters creates a template for anyone to pursue their own semi-formal study.The Mechanical MOOC automates a massive course experience. Get Free Legal Advice from Actual Lawyers at LegalAdvice.com. No, Really. Dear SirI had submitted resignation to join new bank.But bank after 15 days issued charge sheet and after rejected my resignation in august 98 I was compulsory retired from the services of bank on 19sept 1998 . In my case I hv evidence that no real enquiry was ever held . My appeal for reinstatement was pending .I was asked to submit letter with wordings: I MAY BE ALLOWED TO RESIGN IN CASE REINSTATED. I DID SUBMIT THIS LETTER on 19/12/98. I got reinstated back in to services of bank vide letter dated 21.12.98 by setting aside orders of compulsory retirement and it will be effective from the date of joining duties .I joined duties on 28/12/98 but was relieved on the same day .I was not paid any wages from sept to dec.(period of compulsory retirement)

7 Things You Can do Right Now to Protect Your Vision I spend all day on a computer. No, wait, that’s an understatement. I spend nearly every waking hour of every single day in front of a digital device. By 4:00 p.m. my eyes are dry, bloodshot, and begging for relief.

Noam Chomsky on Democracy and Education in the 21st Century and Beyond Combat the epidemic of misinformation that plagues the corporate media! Click here to make a tax-deductible donation to Truthout and keep independent journalism strong. Noam Chomsky. (Photo: Andrew Rusk / Flickr ) Noam Chomsky is an American linguist, philosopher, political critic and activist. He is an institute professor and professor emeritus in the department of linguistics and philosophy at MIT, where he has worked for over 50 years. How to Talk to Little Girls I went to a dinner party at a friend’s home last weekend, and met her five-year-old daughter for the first time. Little Maya was all curly brown hair, doe-like dark eyes, and adorable in her shiny pink nightgown. I wanted to squeal, “Maya, you’re so cute!

How The Military Could Turn Your Mind Into The Next Battlefield Actually, the reason I think they won't happen is that most talk of nanotech and cybernetics and such is more science fiction than science fact. Moving forward into the future won't change the laws of physics, and thus won't change the practicality of any technology. Its like the article that ran about comparing 3D printers to Star Trek's replicators.

Company's skills tests offer glimpse of alternative credentialing The big enchilada of potential disruptions to higher education is if employers go outside of the academy to size up job seekers. While that prospect remains fanciful, for now, new approaches to skills assessment show what the future could look like. Take Smarterer, a Boston-based start-up that offers 800 free online tests for people to prove their chops in areas ranging from C++ programming to speaking English for business or understanding Gothic architecture. And not all the assessments are about getting a job -- there are quizzes on punk rock history and how to use Twitter. Smarterer's tests are crowdsourced, Wikipedia-style, and users can get a meaningful score by answering fewer than 20 questions, company officials said.

Dare to Prepare: Collapse of Civilization Now Guaranteed Eric Blair "It has been written" as the saying goes. For many generations there have been small groups of people who have researched and protested the criminal nature of our rulers who cast their disease on civilization. These activists screamed truth to the masses about humanity's hidden slavery, yet few listened. However, the injustices have now become too extreme, too obvious, that the truth has risen to near critical mass with the independent-minded population. And indeed many more sheep, who unknowingly fund their own prison, are waking up by the minute.

A Vision Of Deep Space Exploration That Will Give You Chills Kinja is in read-only mode. We are working to restore service. As one of the more significant scientists of the last hundred years, Carl Sagan deserves to at least have his name spelled correctly. :)

Bloom's Taxonomy of Learning Domains Bloom's Taxonomy was created in 1956 under the leadership of educational psychologist Dr Benjamin Bloom in order to promote higher forms of thinking in education, such as analyzing and evaluating concepts, processes, procedures, and principles, rather than just remembering facts (rote learning). It is most often used when designing educational, training, and learning processes. The Three Domains of Learning The committee identified three domains of educational activities or learning (Bloom, et al. 1956): Holism For the suffix, see holism. Holism (from Greek ὅλος holos "all, whole, entire") is the idea that natural systems (physical, biological, chemical, social, economic, mental, linguistic, etc.) and their properties should be viewed as wholes, not as collections of parts. This often includes the view that systems function as wholes and that their functioning cannot be fully understood solely in terms of their component parts.[1][2] Reductionism may be viewed as the complement of holism. Reductionism analyzes a complex system by subdividing or reduction to more fundamental parts.

An "Impenetrable Barrier" Protects The Earth From Killer Electrons Kinja is in read-only mode. We are working to restore service. Expand New Report Reimagines Learning in a Networked Society A research report released today by the Connected Learning Research Network tackles the big issues in education and fundamentally reimagines what learning looks like in the 21st century. The Connected Learning Research Network – a group of nine interdisciplinary thinkers (including our own Katie Salen) – is focused on understanding the opportunities and challenges that arise for learning in today’s changing media ecology, and developing a new model of connected learning: learning that is socially-connected, interest-driven, and geared towards educational opportunity for all. In response to these trends, the document offers a new framework to expand the reach of meaningful and sustained learning. Connected learning, the report argues, embodies the values of equity, participation, and social belonging by integrating the divergent spheres of peer culture, interests, and academic content.

Swearing to Make Your Point: A Tale of F**k and Sh*t Apparently I'm weird. I feel the complete opposite of a lot of people I'm seeing here. I actually find that people who are offended by swear words (or who think less of people for using them) are the immature ones. If you can't handle me using the words "fuck" or "shit" in reasonable context, then maybe you're not as mature as you think you are.