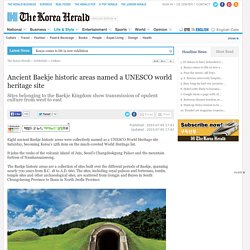 It joins the ranks of the volcanic island of Jeju, Seoul’s Changdeokgung Palace and the mountain fortress of Namhansanseong. The Baekje historic areas are a collection of sites built over the different periods of Baekje, spanning nearly 700 years from B.C. 18 to A.D. 660. The sites, including royal palaces and fortresses, tombs, temple sites and other archaeological sites, are scattered from Gongju and Buyeo in South Chungcheong Province to Iksan in North Jeolla Province. Baekje not only played a critical role in the development of ancient culture in Korea, but also contributed to the overall cultural development of East Asia. It was an active cultural transmitter, adopting rich culture from China and passing it on to Japan and other neighboring states. Splendor and simplicity of Korean art. Rare pieces of Korean traditional art, spanning from the Bronze Age to the 19th-century Joseon era, have been brought together to present the exquisite beauty of Korean art this summer. 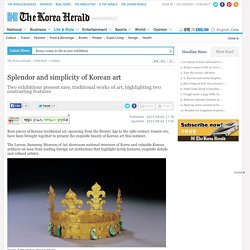 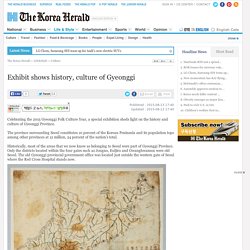 The province surrounding Seoul constitutes 10 percent of the Korean Peninsula and its population tops among other provinces at 12 million, 24 percent of the nation’s total. The making of a Joseon queen. Stories of women at the royal court of the Joseon Dynasty (1392-1910) do not occupy major chapters in the 518 years of history for the monarchy. 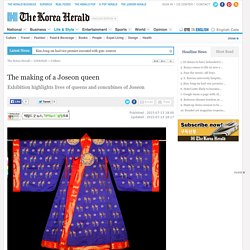 Rather than being major players, queens and concubines are often seen as symbols of jealousy or, sometimes, victims of political strife. Despite little attention paid to their individual lives, these women shaped the sophisticated and splendid royal culture of Joseon that people of today appreciate, more even than the policies implemented by their husbands and sons or the changes in power they led. The lives of queens and concubines of Joseon are back in the spotlight at a current exhibition being held at the National Palace Museum of Korea.

Becoming queen was not an easy task, but hard-earned and rigorous. 'Donguibogam' listed as national treasure. Three sets of a medieval South Korean medical book series listed on UNESCO's Memory of the World Register were designated national treasures, the government said Monday. 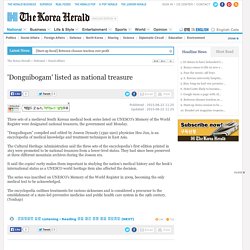 "Donguibogam" compiled and edited by Joseon Dynasty (1392-1910) physician Heo Jun, is an encyclopedia of medical knowledge and treatment techniques in East Asia. The Cultural Heritage Administration said the three sets of the encyclopedia's first edition printed in 1613 were promoted to be national treasures from a lower-level status. Joseon-era exam papers to be revealed. More ancient Korean documents will be revealed to the public as part of a project of the Academy of Korean Studies to highlight Korea’s rich history and tradition, said Lee Bae-yong, president of the AKS, at a news conference on Tuesday in Seoul. 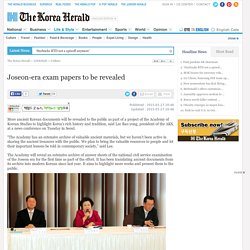 “The Academy has an extensive archive of valuable ancient materials, but we haven’t been active in sharing the ancient treasures with the public. We plan to bring the valuable resources to people and let their important lessons be told in contemporary society,” said Lee. Tracing Korea’s traditional shoemaking. No outfit is complete without shoes. 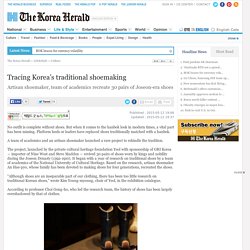 But when it comes to the hanbok look in modern times, a vital part has been missing. Platform heels or loafers have replaced shoes traditionally matched with a hanbok. A team of academics and an artisan shoemaker launched a rare project to rekindle the tradition. From birth to death: Joseon life expressed in white porcelain. “Careful in speech, yet enough to reveal the entire world, and follow murkiness and clearness from time to time. 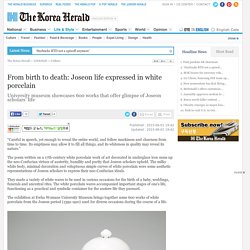 Its emptiness may allow it to fill all things, and its whiteness in quality may reveal its nature.” Stories behind Buddhist art. Around 1247, Empress Hampyeong of Goryeo (918-1392) commissioned an artisan known for his skilled silver engraving to inscribe patterns of clouds and lotuses on a bronze vase in a prayer for the well-being of her family and country. 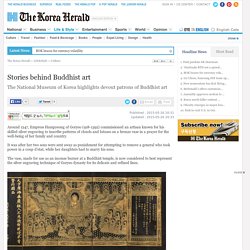 It was after her two sons were sent away as punishment for attempting to remove a general who took power in a coup d’etat, while her daughters had to marry his sons. The vase, made for use as an incense burner at a Buddhist temple, is now considered to best represent the silver engraving technique of Goryeo dynasty for its delicate and refined lines. The glamour and opulence of Korean ancient art has largely been represented through Buddhist art. Rare shamanism archive unveiled. Building the world’s edgiest art collection. Among the thousands of stamps that Dutch philatelist Wim van der Bijl has gathered from all over the world, the image on a small North Korean stamp left on him a strong impression. 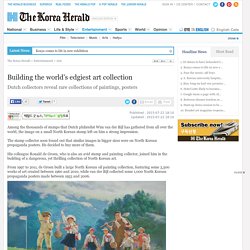 In 2001, seven years before South Korea’s abolishment of the male-dominated family registration system took effect, novelist Gong Ji-young wrote an angry column for a local daily for the sake of her children. Before the abolishment of the system, women were not allowed to register their children under their own family name, as the law stipulated that all individuals must be registered under their biological father’s name only.

This meant the children’s names could not be changed even if their mother was remarried after being divorced or widowed. Gong, who was married to her third husband at the time, had two children from her previous marriages. Korea’s first nursing school founder honored. Margaret Jane Edmunds, a late American nurse who founded Korea’s first nursing school in 1903, has been posthumously awarded the Order of Civil Merit by the South Korean government 70 years after her death, according to the Korean Nurses Association. Edmunds (1871-1945) is the founder of the Pogunyogwan Training School for Nurses, which is now the division of nursing science at Ewha Womans University in Seoul. The first Korean nurses in history ― Kim Martha and Lee Grace ― were taught by Edmunds at the school and became nurses in 1906.

Among the two, Kim was an abused housewife before joining Edmunds, while Lee had been a servant for an aristocratic family. “Edmunds mentored the very first Korean women who chose to have a career with professional education,” said an official at the Korean Nurses Association. Seoul City to tear down colonial building. Seoul City will tear down a building built during Japan’s colonial period as part of its project to mark the 70th anniversary of Korea’s liberation in August, officials said Wednesday. Seoul Metropolitan Government said it would demolish the annex of the former National Tax Service building near Deoksugung Palace in central Seoul. The annex, situated between the palace and the Seoul Metropolitan Council building, was built by Japan in 1937 in an alleged attempt to conceal the palace, experts said. The annex has been vacant since the tax agency relocated to the administrative city of Sejong late last year.

257 independence fighters to be posthumously honored. [Weekender] River encapsulates Korea’s history. In human history, rivers have played a pivotal role for the birth and development of villages, cities and civilizations, as they have provided them with fishing, water, transportation, and other essentials.For Korea, the Hangang River has undertaken that role, serving as a crucial conduit for people’s exchanges and communication, and laying the groundwork for the flourishing of ancient kingdoms, though it was, at times, exploited by outside forces as an invasion route.

The artist, using everyday materials to create resounding messages about society, nature and the human race, has emerged as a compelling talent in the international art scene. [Herald Interview] Art crafted by North Korean hands. With or without Jobs, Mark Rothko strikes a chord with Koreans. [Up & Coming] Webtoon artist Kim tells stories of hardships with humor. [Kim Seong-kon] Mental clocks and specters of the past. Recently, I met a Korean-American professor who pointed out that the Korean people’s mental clock had stopped ticking, and was forever stuck in the past times of colonial rule and military dictatorship.

I could not agree with her more. Ironically, our psychological clocks are stuck in the past, even as we develop forward-looking technologies. Doctors recommend vaccines for expats. A group of doctors Friday recommended foreign residents in South Korea to get vaccinated against five infectious diseases in an effort to better prevent the possible spread of contagious illnesses. The Korean Society of Infectious Diseases encouraged foreigners to receive five vaccines -- Japanese encephalitis, hepatitis A, MMR, chicken pox and DTaP, which protects against tetanus, diphtheria and whooping cough. South Korea's Hangover. South Koreans drink twice as much liquor as Russians and more than four times as much as Americans. The changes Instacart outlined were grim.

Fees for customers were increasing. One-hour delivery in New York City had been suspended. In stores, standards were getting much stricter. A lengthy list of policies detailed everything from how Instacart shoppers should dress to when they could listen to music (only on break, only with headphones). Shoppers who breached two rules would be placed on four weeks’ probation. Instacart is a richly valued startup that uses an app and a network of hired “shoppers” to deliver groceries from stores to customers in as a little as an hour. Women more prone to depression in Korea.