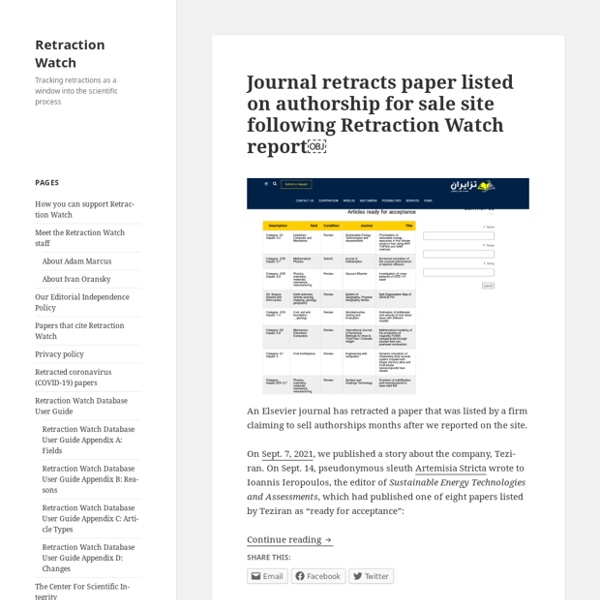 Wrong cell line leads to retraction of kidney cancer study A group of authors in China has retracted their December 2013 paper in PLoS ONE after realizing that they’d been studying the wrong cells. The paper, “Up-Regulation of pVHL along with Down-Regulation of HIF-1α by NDRG2 Expression Attenuates Proliferation and Invasion in Renal Cancer Cells,” came from Lei Gao, of the Fourth Military Medical University, in Xi’an, and colleagues. It purported to find that: Read the rest of this entry » Retractions appear in case of former Kansas water scientist rebuked for misconduct

The Information Literacy User’s Guide: An Open, Online Textbook Introduction In 2010, a textbook being used in fourth grade classrooms in Virginia became big news for all the wrong reasons. The book, Our Virginia by Joy Masoff, had caught the attention of a parent who was helping her child do her homework, according to an article in The Washington Post. Carol Sheriff was a historian for the College of William and Mary and as she worked with her daughter, she began to notice some glaring historical errors, not the least of which was a passage which described how thousands of African Americans fought for the South during the Civil War. Further investigation into the book revealed that, although the author had written textbooks on a variety of subjects, she was not a trained historian.

Sci-Hub provides access to nearly all scholarly literature The website Sci-Hub provides access to scholarly literature via full text PDF downloads. The site enables users to access articles that would otherwise be paywalled. Since its creation in 2011, Sci-Hub has grown rapidly in popularity. However, until now, the extent of Sci-Hub's coverage was unclear. As of March 2017, we find that Sci-Hub's database contains 68.9% of all 81.6 million scholarly articles, which rises to 85.2% for those published in closed access journals. Furthermore, Sci-Hub contains 77.0% of the 5.2 million articles published by inactive journals. School Librarians Are Teaching Digital Citizenship April Wathen photo: Jill Springer April Wathen, Kathy Lester, and Steven Yates. As technology and social media play an increasingly big role in the classroom, educators are faced with challenges of teaching students how to use technologies in appropriate ways, and how to be safe and responsible online—the basic tenets of what is known as digital citizenship, a close relative of digital literacy.

Group blogs: BMJ The BMJ Today: If you hear hoof beats in Texas think of horses, not zebras As Saurabh Jha writes, “The likelihood that someone with cerebral aneurysm hit by a bat develops subarachnoid hemorrhage (near certainty) is not the same as the likelihood that someone who develops subarachnoid hemorrhage after high impact trauma has an aneurysm, hitherto undisclosed (very low).” But would you order tests so you could absolutely rule it out? Would you perhaps order further tests to rule out bleeding brain metastases from lung cancer? Jha asks us to stop “hunting for zebras in Texas” and put an end the “rule-out” culture that pervades medicine. more… Desmond O’Neill: Combatting rigidity in medicine

Designing conference posters » Colin Purrington A large-format poster is a big piece of paper or wall-mounted monitor featuring a short title, an introduction to your burning question, an overview of your novel experimental approach, your amazing results in graphical form, some insightful discussion of aforementioned results, a listing of previously published articles that are important to your research, and some brief acknowledgement of the tremendous assistance and financial support conned from others — if all text is kept to a minimum (less than a 1000 words), a person could fully read your poster in 5-10 minutes. Section content • DOs and DON’Ts • Adding pieces of flair • Presenting • Motivational advice • Software • Templates • Printing • Useful literature • Organizing a poster session What to put in each section Below, I’ve provided rough tips on how many words each of these sections might have, but those guesses are assuming you have a horizontal poster that is approximately 3×4′.

*Truth, truthiness, triangulation: A news literacy toolkit for a “post-truth” world We were guaranteed a free press, We were not guaranteed a neutral or a true press. We can celebrate the journalistic freedom to publish without interference from the state. We can also celebrate our freedom to share multiple stories through multiple lenses. Another look at Qualitative data analysis for Mac users: Dedoose Home > Uncategorized > Another look at Qualitative data analysis for Mac users: Dedoose Technically I’m not meant to be looking at data analysis right now: it’s writing month, and the last thing I need to be doing is getting lost in data. However, the Qualitative Data Analysis Software for Mac – A Brief Look post that I wrote last September is still getting a huge amount of traffic every day, and I thought it was time to write a quick update. What’s changed? Lots.

Facebook, Google and others join The Trust Project, an effort to increase transparency around online news “Fake news” and other misinformation, online propaganda, and satirical content people believe is true have filled the web via search engines and social media, and have caused a rift in how people perceive today’s news organizations and the quality of their coverage. A nonpartisan effort called The Trust Project is working to address this situation by helping online users distinguish between reliable journalism and promotional content or misinformation. Today, a key part of that effort – called “Trust Indicators” – are going live on Facebook, offering easy-to-access, transparent information about a news organization’s ethics and practices. Here’s how this will work in practice: starting today on Facebook, an icon will appear next to articles in the News Feed. Facebook, Google, Bing and Twitter have all committed to displaying these indicators, though not all implementations are yet live. These are as follows:

The librarian will see you now - Libraries Taskforce [Editor’s note: Guest post written by Dr Caroline De Brún, Knowledge and Evidence Specialist, Public Health England] Librarians have an integral part to play in shared decision-making and health information literacy, because they possess the required skills and are uniquely positioned to provide information support to the public. Shared decision-making in a healthcare setting Shared decision-making is when patients participate in the decisions made about their treatment options. At the Salzburg Global Seminar, participants from 18 countries agreed a statement that calls on patients and clinicians to work together to be co-producers of health. Kean Birch: How to get published in academic journals Last week I spent a frustrating hour or two refereeing a paper for an academic journal – I say frustrating because the paper had a kernel of something really interesting buried inside a morass of wordiness and theory-ness. I actually came up with the term “theory-ridden” as a direct result of reading the paper. I don’t want to be mean about things here though. I’ve actually written about the need to be constructive in reviews – see here – and I think that the authors of this particular piece need encouragement not flagellation.