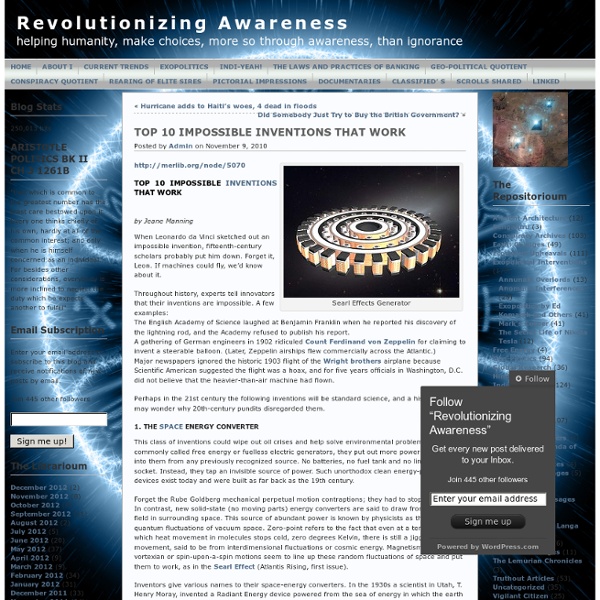 Searl Effects Generator by Jeane Manning When Leonardo da Vinci sketched out an impossible invention, fifteenth-century scholars probably put him down. Throughout history, experts tell innovators that their inventions are impossible. Perhaps in the 21st century the following inventions will be standard science, and a history student may wonder why 20th-century pundits disregarded them. This class of inventions could wipe out oil crises and help solve environmental problems. Forget the Rube Goldberg mechanical perpetual motion contraptions; they had to stop eventually. Inventors give various names to their space-energy converters. A spiritual commune in Switzerland had a tabletop free energy device running in greenhouses for years, but members feared that outsiders would turn the technology into weaponry. It may have been done before Tesla’s time. The garage inventors come from many backgrounds. One example is U.S. Look, Mom Earth, no power lines! 8. Like this:

Tesla Coils: Unleash the Aether Nikola Tesla's most significant contribution was not AC power, radio, or the induction motor, but what we call the Tesla Coil - a tool which allows for the power of the aether to be unleashed and harnessed. Now being launched through an open source project. by Hank MillsPure Energy Systems News The inventions of Nikola Tesla are numerous. He invented radio, teleautomatics (remote control technology), poly-phase alternating current, the induction motor, and many other innovations that established the foundation for our modern civilization. However, the true significance of his greatest discovery - the "Tesla Coil" - goes mostly unrecognized. There are many misconceptions about Tesla coils and their intended use. Tesla coils have capabilities beyond even the highest voltage transformers of our day, because they are something far different. Radiant Blasts When an electrical switch in an electrical circuit is opened or closed, a spark of high voltage can be created. Safety Enhancements

Brain Painting Amazon Unveils Flying Delivery Drones on '60 Minutes' Amazon founder and CEO Jeff Bezos is known for making big bets in the world of innovation, and on Sunday night on 60 Minutes he revealed what might be one of his biggest: product delivery by flying robot drones. The service is called Amazon Prime Air and it's slated for rollout sometime in 2015, depending on FAA approval. A video of how the service will work has already been posted to YouTube, showing the process of the package being taken from the warehouse floor and on to the front steps of the customer’s home. The idea is to have the drone deliver orders roughly 30 minutes after the customer hits the “buy” button on Amazon.com. Bezos was so excited about the news that he kept the details under wraps until just before the interview with the network began. Reacting to the unveiling of the Amazon-branded drone, Bezos interviewer Charlie Rose said, “I had no idea what its purpose was at first glance… They actually look like something out of a Philip K. BONUS: Drones vs. Image: Amazon

Will 2012 Be The Year 3D Printing Goes Mainstream? A 3D printed shoe from the Cube At CES 2012 3D Systems presented their solution to the growing debate about whether and when 3D printing will cross over to the mainstream. It came in the form of the Cube, priced at $1,299, a consumer plug-and-print product they hope will have the crossover appeal to find its way into every home, nudging the iDevices and games consoles out of the way to the top of the 2012 Christmas list. MakerBot Industries, another well-established 3D printing firm, has also made its claim to the home market with the Replicator ($1,749), a two-color printer they also launched at CES. But the transition from obscure hobbyist product to mainstream consumer item isn’t just going to happen overnight with the wave of a magic, 3D-printed wand. With 3D printers, users can effectively turn a digital file into a physical object, either by feeding the printer a design or by scanning an object with a 3D scanner. Community Is The Key 3D Systems’ Cube 3D Printing Goes Mobile

12 must-see skywatching events in 2012 - Technology & science - Space - Space.com As the year 2011 comes to a close, some might wonder what is looming sky-wise for 2012? What celestial events might we look forward to seeing? I've selected what I consider to be the top 12 "skylights" for this coming year, and list them here in chronological order. Not all these events will be visible from any one locality ... for the eclipses, for instance, you'll probably have to do some traveling ... but many can be observed from the comfort of your backyard. Hopefully your local weather will cooperate on most, if not all, of these dates. Clear skies! Jan. 4: Quadrantid meteor shower peaks This meteor shower reaches its peak in the predawn hours of Jan. 4 for eastern North America. From the eastern half of North America, a single observer might count on seeing as many as 50 to 100 "Quads" in a single hour. Mercury will arrive at its greatest elongation from the sun March 5. Compare this with the August 2003 opposition when Mars was only 34.6 million miles away. © 2013 Space.com.

GeoCity Impressions The 10 Smartest Cities In Europe | Co.Exist | World changing ideas and innovation When it comes to smart cities, Europe is the model for the rest of the world to learn from. European cities tend to be denser, have better public transit, larger commitment to cycling and walking, a stronger focus on sustainability and low-carbon solutions, and perhaps most important, a culture and citizenry more engaged in the journey towards more sustainable and smarter cities. Of course this is a generalization: this series of regional ranking reports has demonstrated leadership from cities across the globe. But, as I wrote in our rankings of North America's smartest cities, our urban centers "demand 21st-century solutions to accommodate their growing populations in ways that not only maintain the quality of life, but also improve it. Without further ado, here is the top 10 smart cities for Europe in 2013 (and here's more about how we ranked them). 1: Copenhagen 2: Amsterdam Like Copenhagen the cycling rates here are off the charts. But Amsterdam is much more than just bikes. 3: Vienna

Beautiful Home Built from Salvaged Car Parts (Video) Fair Companies/Video screen capture An awful lot of cars end up in junk yards. And that means an awful lot of waste. Green architect Karl Wanaselja has built a stunning home in Berkeley, California using salvaged car panels for siding and minivan windows for awning and windows. But that's just the beginning of how awesome this house is. From its relatively small footprint to its passive solar construction, the house has been built for both performance and comfort. The siding, for example, had to be salvaged from very specific cars to match Wanaselja's vision in terms of color, but also to take into account that most cars that end up in junk yards aren't in the best condition. The outbuildings are pretty awesome too. And there's a home office/studio made from a refrigerated shipping container. From an old garage turned stunning tiny house to a Spanish ghost town turned eco-village, we're already used to some really beautiful videos from the folks at Fair Companies.

In Retrospect - Part I How To Extract Sheet Music From YouTube Videos ⚙ Co.Labs ⚙ Code + Community Picking out the different parts of a song after it’s been recorded is like naming every ingredient of a cooked dessert: It's difficult. With its new algorithmic approach, Chordify is the latest to attempt the dissection. The service not only displays sheet music for locally uploaded songs, but for a wide selection of streaming music found online. Unlike other reverse engineering solutions, Chordify makes it as simple as pasting in a link from Deezer, SoundCloud, or YouTube, turning them into sheet music you can play along with. Instead of picking out every note in a piece of music, which is very difficult, Chordify looks at the big picture of songs. It’s obviously pretty complex under the hood, but boiled down, the service uses the VAMP plug-in to filter the audio and separate it into different parts. “HarmTrace uses a model of Western tonal harmony to aid in the chord selection,” says De Haas. Trying out a few different songs from different genres, all seemed to have similar results.

10 Tips for Monetizing Social Traffic Through Virtual Currency This is a guest post by Anu Shukla, CEO of Offerpal Media. Offerpal Media is a leading “managed offer platform” for social applications, virtual worlds, games, and community-oriented websites. The Opportunity A new boon is taking place on the Internet. led by the proliferation of virtual currency and virtual goods, is rapidly expanding. No one knows yet the exact size or potential of the market, though even conservative estimates put it at well over $2 billion. What’s behind the boon? virtual goods are the most effective way to monetize traffic on their properties. Today, there’s little doubt that virtual currency is the most effective way for social web publishers to monetize their traffic. 10 Tips for Monetizing Social Traffic through Virtual Currency 1. A virtual economy is much like a real economy in that it is driven by human psychology and human motivations including greed, ambition, curiosity, power, a sense of belonging, and others. 2. 3. 4. 5. 6. 7. 8. 9. 10. Conclusion