This glass sphere might revolutionize solar power on Earth 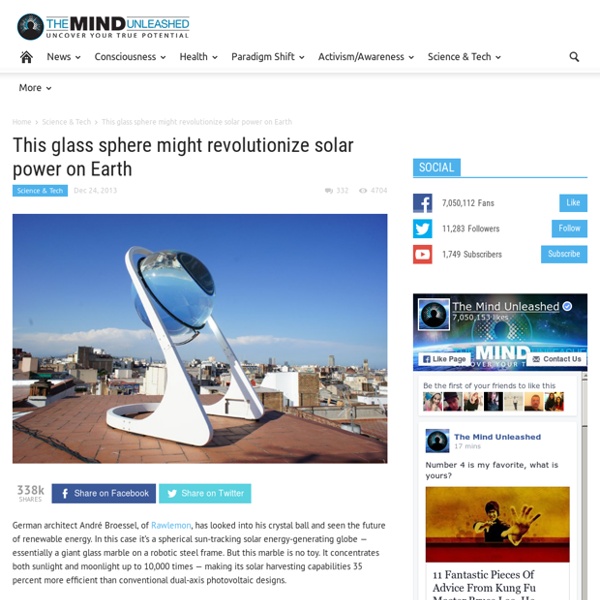 German architect André Broessel, of Rawlemon, has looked into his crystal ball and seen the future of renewable energy. In this case it’s a spherical sun-tracking solar energy-generating globe — essentially a giant glass marble on a robotic steel frame. But this marble is no toy. It concentrates both sunlight and moonlight up to 10,000 times — making its solar harvesting capabilities 35 percent more efficient than conventional dual-axis photovoltaic designs. André Broessel was a finalist in the World Technology Network Award 2013 with the globe’s design and afterward produced this latest version, called Betaray, which can concentrate diffuse light such as that from a cloudy day. André Broessel’s latest invention looks like something out of a superhero movie. In reality, though, it’s a stand-alone solar energy generator. But Broessel’s invention may be more than just aesthetically pleasing. “We can squeeze more juice out of the sun,” Broessel says. Source: NewsDiscovery

New Urban Mini Turbine for lantern poles introduced - The Archimedes 27 May 2014 | On the market launch of its ‘big brother’ – the Liam f1 – R&D company the Archimedes introduced a smaller version as well: the Liam Pole Mini Urban Wind Turbine. With half its size (ø 0.75cm) it will be mounted on a Cradle-2-Cradle lantern Pole manufactured by Sapa Pole Products. This new Product Market Combination (PMC) has the potential to save a lot of money on electrical infrastructure. When combining the Liam Pole urban mini wind turbine with a set of solar panels (PV), a LED lantern pole becomes totally self-sufficient. During daylight the solar panels and the turbine will charge a battery which will supply the light emitting diodes (LEDs) during night time, supported by the Liam turbine when enough wind is at hand.

Vascular Channels Based On Plant Leaves Allow For Self-Healing In New Solar Cells Clean Power Published on August 15th, 2013 | by James Ayre Self-healing solar cells — possessing “vascular” networks similar to those in plant leaves — have now been created by researchers from North Carolina State University. Is the solar panel & battery combo ready to change energy markets? The big idea right now for solar and batteries is this: put solar panels on your roof, a battery in the backyard (or basement), and become utterly independent from the power grid, using free electricity from the sun. Batteries have long been looked to as a way to store energy solar energy during the day to be used at night, but they have long been too expensive to be used widely. But many companies are looking at 2015 as a very important year for the solar and battery partnership and I’ve heard the word “tipping point” being used repeatedly about this intersection recently. Why all the excitement and why now? First off, traditional lithium-ion batteries — the kind being widely used in cell phones and laptops — are becoming cheaper than ever before.

Wind systems The amount of renewable electricity harnessed from the wind is growing rapidly. Australia has an abundant wind resource, which, if used to generate electricity, could save significant greenhouse gas emissions. To take advantage of this resource, turbines must be installed in open sites on sufficiently tall towers. EWAO Nigerian Man Turns A VW Beetle Into A Solar And Wind Powered Car This is one of the coolest ideas and to top it off it’s completely reasonable too! Segun Oyeyiola was a student at Obagemi Awolowo University and while he was in attendance there, he converted his gas thirsty Volkswagen into a completely green energy machine by installing a large solar panel on the top of the car, with an additional wind turbine underneath the hood. His idea is to have his concept of his new invention to become “Nigeria’s future car.” At birth, the battery took 4-5 hours to charge, that was definitely not ideal. Yet the largest challenge, according to Mr.

List of Top 5 Micro Wind Turbines Needs a Second Look Clean Power Published on April 30th, 2013 | by Tina Casey One of the most popular micro wind turbine companies around, Southwest Windpower, began to scale back operations last year and has apparently closed its doors, which means that our list of Top 5 Micro Wind Turbines is overdue for a re-do. As a preliminary step, let’s take a look at JLM Energy, Inc., an all-around renewable energy company that has figured out a way to piggyback its Zefr micro wind turbine arrays onto Southwest’s poles, resulting in a clever way to squeeze some extra juice out of existing wind turbine infrastructure. Zefr micro wind turbine courtesy of JLM Energy No More Southwest Wind Power IBM Solar Collector Magnifies Sun By 2000X – These Could Provide Power To The Entire Planet A team at IBM recently developed what they call a High Concentration Photo Voltaic Thermal (HCPVT) system that is capable of concentrating the power of 2,000 suns, they are even claiming to be able to concentrate energy safely up to 5,000X, that’s huge. The process of trapping the sunlight produces water that can be used to produce filtered drinkable water, or used for other things like air conditioning etc. Scientists envision that the HCPVT system could provide sustainable energy and fresh water to communities all around the world.

Explorez les groupes de neutres Choosing one of our six neutral groups is a wonderful way of achieving a timeless and cohesive scheme in your home. Each group contains four colours that sit effortlessly together for an understated look, or as a base for bolder shades and patterns. 1. Start by deciding which group you are most drawn to. By picking your favourite tones, you’ll create a welcoming retreat that naturally reflects your personality. 2. World's smallest windmills to power cell phones While commercial wind turbines have been trending toward larger sizes, from 300 kW capacity in 1990 to 7.5 MW in 2011, sometimes it is worth bucking the trend. Professor J.C. Chiao and his postdoc Dr. Smitha Rao of the University of Texas at Arlington have taken this contrarian philosophy to the extreme. They have developed a MEMS-based nickel alloy windmill so small that 10 could be mounted on a single grain of rice.

New Printable Solar Panels Are Ready To Hit The Market! Australian solar technicians with the Victorian Organic Solar Cell Consortium have announced that they will soon put a new printable solar cell technology on the market. Trueactivist.com Image: CSIRO Printable Solar Panels May Be Coming to a Device Near You