The Vitamin Myth: Why We Think We Need Supplements - Paul Offit 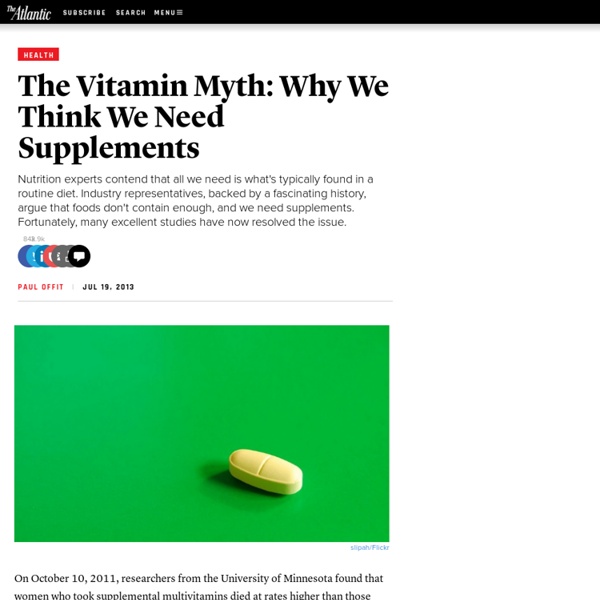 On October 10, 2011, researchers from the University of Minnesota found that women who took supplemental multivitamins died at rates higher than those who didn't. Two days later, researchers from the Cleveland Clinic found that men who took vitamin E had an increased risk of prostate cancer. "It's been a tough week for vitamins," said Carrie Gann of ABC News. These findings weren't new. In 1931, Linus Pauling published a paper in the Journal of the American Chemical Society titled "The Nature of the Chemical Bond." For this single paper, Pauling received the Langmuir Prize as the most outstanding young chemist in the United States, became the youngest person elected to the National Academy of Sciences, was made a full professor at Caltech, and won the Nobel Prize in Chemistry. In 1949, Pauling published a paper in Science titled "Sickle Cell Anemia, a Molecular Disease." In 1961, Pauling collected blood from gorillas, chimpanzees, and monkeys at the San Diego Zoo. How could this be? Related:  Experiments, Ethics & Society

The 50 Greatest Breakthroughs Since the Wheel - James Fallows Any collection of 50 breakthroughs must exclude 50,000 more. What about GPS systems, on which so many forms of movement now depend, and which two panelists recommended? What about the concept of the number zero, as suggested by Padmasree Warrior, the chief technology and strategy officer at Cisco? (She did not rank her 25 items, but 18 of them showed up among the final 50; Michelle Alexopoulos, an economics professor at the University of Toronto, had 21, and Walter Isaacson had 25 of the 26 he submitted.) In addition to coal, how can no one have mentioned paved roads? We notice that innovation may be less personalized than we assume. We learn, finally, why technology breeds optimism, which may be the most significant part of this exercise. The Future Popular culture often lionizes the stars of discovery and invention. By expanding the pool of potentially literate people, the adoption of corrective lenses may have amounted to the largest onetime IQ boost in history. Most of these U.S. 1.

The Stanford Prison Experiment: A Simulation Study of the Psychology of Imprisonment Thirty Years Later, Stanford Prison Experiment Lives On By Meredith Alexander Stanford Report, August 22, 2001 Thirty years ago, a group of young men were rounded up by Palo Alto police and dropped off at a new jail -- in the Stanford Psychology Department. Strip searched, sprayed for lice and locked up with chains around their ankles, the "prisoners" were part of an experiment to test people's reactions to power dynamics in social situations. Other college student volunteers -- the "guards" -- were given authority to dictate 24-hour-a-day rules. They were soon humiliating the "prisoners" in an effort to break their will. Psychology Professor Philip Zimbardo's Stanford Prison Experiment of August 1971 quickly became a classic. "In a few days, the role dominated the person," Zimbardo -- now president-elect of the American Psychological Association -- recalled. Its story, however, endures, achieving a level of recognition shared by few other psychological experiments.

The Stanford Prison Experiment: Still powerful after all these years (1/97) CONTACT: Stanford University News Service (415) 723-2558 The Stanford Prison Experiment: Still powerful after all these years I was sick to my stomach. When it's happening to you, it doesn't feel heroic; it feels real scary. It feels like you are a deviant. ­ Professor Christina Maslach, UC-Berkeley, to psychologists gathered in Toronto, Aug. 12, 1996 The view through the doorway was too familiar ­ like something she had seen in the international news sections of Life or Newsweek. Several young men ­ dressed in khaki uniforms and wearing reflector sunglasses that hid their eyes ­ were herding a larger group of men down a hallway. Christina Maslach's stomach reacted first. On that fateful Thursday night a quarter-century ago, Maslach would take actions that made her a heroine in some circles as "the one who stopped the Stanford Prison Experiment." Yet she had difficulty resisting the group pressure to be enthusiastic about what was going on in the name of science. Jekyll and Hyde experience

10 Famous Psychological Experiments That Could Never Happen Today Here are the stories behind the nicknames of the NFL’s 32 teams—and what they were almost called. All photos via Getty Images. Getty Images The franchise began play in Chicago in 1898 before moving to St. Shortly after insurance executive Rankin Smith brought professional football to Atlanta, a local radio station sponsored a contest to name the team. Ravens, a reference to Edgar Allan Poe’s famous poem, beat out Americans and Marauders in a contest conducted by the Baltimore Sun. Of the more than 33,000 voters in the Sun’s phone-in poll, more than 21,000 picked Ravens. The Bills nickname was suggested as part of a fan contest in 1947 to rename Buffalo’s All-America Football Conference team, which was originally known as the Bisons. Panthers team president Mark Richardson, the son of team owner Jerry Richardson, chose the Panthers nickname because "it's a name our family thought signifies what we thought a team should be—powerful, sleek and strong." Tom Pennington/Getty Images

Lewis Terman (1877–1956) - Testing, Stanford, Gifted, and Intelligence Lewis M. Terman was a psychologist who developed some of the earliest and most successful measures of individual differences. He was raised on an Indiana farm and, after an early career as a schoolteacher and high school principal, received his doctorate in psychology from Clark University in 1905. After four years of teaching pedagogy at the Los Angeles State Normal School, he joined the education faculty at Stanford University in 1910. In 1922 he became head of Stanford's Psychology Department, a position he held until his retirement in 1942. At Stanford, Terman followed up his doctoral research on mental testing by working on a revision of Alfred Binet's 1905 scale of intelligence. The success of the Stanford-Binet brought Terman professional acclaim. Terman viewed the widespread adoption of tests in the schools as a reflection of how testing could be of use to American society. He extended his interest in gender differences to the study of marital adjustment. BORING, EDWIN G. 1959.

5 Experts Answer: Can Your IQ Change? | Intelligence Tests & IQ Scores Each week, MyHealthNewsDaily asks the experts to answer questions about your health. This week, we asked psychologists: Can your IQ ever change? Jack Naglieri, research professor at University of Virginia: The answer to this question, like many others, depends on a number of factors. I've been able to teach children to be better in mathematics without teaching them mathematics. Understanding changes in IQ also requires carefully considering how intelligence is being measured. The best way to measure intelligence is to measure those abilities that underlie the acquisition of knowledge, separately from the knowledge we have. Richard Nisbett, professor of psychology at the University of Michigan: Yes, your IQ can change over time. The most volatility in IQ scores is in childhood, mostly in adolescence. Also, the average IQ of people is changing over time. Now, validity of IQ as a measurement of all that we consider "intelligence" is another question. Absolutely. Alan S. It depends.

Stability and Change in Children's Intelligence Quotient Scores: A Comparison of Two Socioeconomically Disparate Communities + Author Affiliations Received November 16, 2000. Accepted May 11, 2001. Abstract The authors estimated the influence of familial factors and community disadvantage on changes in children's intelligence quotient (IQ) scores from age 6 years to age 11 years. Despite controversies about the meaning and nature of general intelligence, few would dispute the claim that scores on standardized intelligence quotient (IQ) tests are strong predictors of important outcomes for members of both majority and minority groups. We examined the contributions of familial factors and disadvantaged community to IQ change from the beginning of schooling to 5 years later. Samples of low birth weight and normal birth weight children were randomly selected from the newborn discharge lists of two major hospitals in southeastern Michigan, one in the City of Detroit and the other in a nearby suburb. Five years later, in 1995–1997, when the children were 11 years old, we reassessed the sample. IQ measurement