Why Generation Y is unhappy 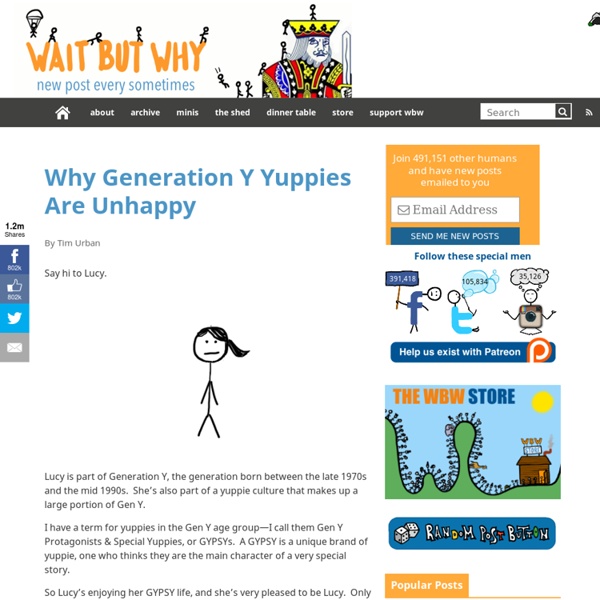 Say hi to Lucy. Lucy is part of Generation Y, the generation born between the late 1970s and the mid 1990s. She’s also part of a yuppie culture that makes up a large portion of Gen Y. I have a term for yuppies in the Gen Y age group—I call them Gen Y Protagonists & Special Yuppies, or GYPSYs. A GYPSY is a unique brand of yuppie, one who thinks they are the main character of a very special story. So Lucy’s enjoying her GYPSY life, and she’s very pleased to be Lucy. Lucy’s kind of unhappy. To get to the bottom of why, we need to define what makes someone happy or unhappy in the first place. It’s pretty straightforward—when the reality of someone’s life is better than they had expected, they’re happy. To provide some context, let’s start by bringing Lucy’s parents into the discussion: Lucy’s parents were born in the 50s—they’re Baby Boomers. Lucy’s Depression Era grandparents were obsessed with economic security and raised her parents to build practical, secure careers. GYPSYs Are Delusional

Millennials Make Up Almost Half of Latino Eligible Voters in 2016 Youth, Naturalizations Drive Number of Hispanic Eligible Voters to Record 27.3 Million By Jens Manuel Krogstad, Mark Hugo Lopez, Gustavo López, Jeffrey S. Passel and Eileen Patten Me, My Selfie and I See also: 7 Tips For Great Selfies It's official: 2013 is the year that the selfie came into its own. The self-taken mobile photo now boasts its own art exhibition as well as a new linguistic status—Oxford Dictionaries just added the word in August, making it a legitimate part of the English language. (Update: Oxford has made named it the word of the year for 2013.)

9 Ways Privileged People Can Reduce the Negative Impact of Gentrification There was once a small brick barbeque joint on Divisadero Street in San Francisco known as Da’ Pitt. Its customer base was small, but loyal, comprised mostly of low-income African-American families. Though no one travelled more than walking distance to get there, nor wrote about it on Urbanspoon, it fed its community and it was loved. But the neighborhood gentrified, the community dwindled, and Da’Pitt could no longer serve enough BBQ to pay its rent.

Female Hormones Can Make a Bloody Mess of Your Mental Health Image via Flickr user Hey Paul Studios Mood swings, depression, tiredness, fatigue, irritability, anxiety, reduced cognitive ability, aggression, anger, sleep disorders and food cravings. One of the fun things about having a womb is that the aforementioned are simply considered par for the course. Why Sweden Is Shifting To A 6-Hour Workday The eight-hour workday hasn't changed much since Henry Ford first experimented with it for factory workers. Now, Americans work slightly longer—an average 8.7 hours—though more time goes into email, meetings, and Facebook than whatever our official job duties actually are. Is it time to rethink how many hours we spend at the office? In Sweden, the six-hour workday is becoming common. Millennials Prefer Sanders to Clinton Photo Credit: via YouTube The latest Rock The Vote/USA Today poll outlines the political leanings of the millennial generation, 18- to 35-year-olds. If the Democratic primary were held today, Sanders has an 11-point lead over Clinton, with young voters supporting Sanders at 46 percent and Clinton at 35 percent. A Pew Research Survey that came out early last year outlined the tipping point for the millennial generation, which eclipsed baby boomers in the number of voters. This will be the first presidential election since millennials became a political force to be reckoned with.

Ucas warns some students may be disadvantaged by A-level changes Ucas, the organisation that handles British university admissions, is warning that some students applying for places may be disadvantaged by the uneven and confusing wave of A-level exam changes taking place later this year. In a survey of 500 secondary schools, Ucas found many unsure how to respond to the A-level changes in England, which strip out AS-level exams as part of A-level grades and introduce a series of new two-year linear exams from September this year until 2017. Ucas warned that the mixture of new and old-style exams, some including modular AS-levels and some not, will not be over until 2020. “Universities and colleges should review their admissions practices in light of qualification reform happening around the UK to ensure that students are not disadvantaged as a result of curriculum choices made by their schools or colleges,” Ucas recommended to universities as part of its analysis. Ucas said universities would need to be clear and transparent in their entry requirements.

Weatherwatch: Statistically, February is the cruelest month December has shown how rapidly British weather can change, with five days of sharp frosts and freezing fog in the middle of the month and then, less than 24 hours later, relatively warm but raining. Much depends on the direction of the wind: north and east is generally cold and dry, west and south comparatively mild but often windy and wet. Long-term statistics give averages, and are therefore useless when predicting what the weather will be like on any particular day. Although January and February are on average the coldest months in any year, the temperature can vary daily between 15C and minus 10C depending on the direction of the wind and absence of a warm blanket of cloud. But taking averages over the past 130 years, the 10 coldest days are spread out between 3 January and 20 February. Half of these days are in the first half of January.

7 'digital nomads' explain how they live, work and travel Feel miserable working in a cubicle or living in a boring town? The Internet has revolutionized the term ‘work’ today, bringing new opportunities and employment that didn’t exist until recently. For many, the Internet is an opportunity to combine work and traveling the world. The term ‘digital nomad’ is frequently overused and often simply means hacking around in cheap accommodation with a small level of income to keep you going.