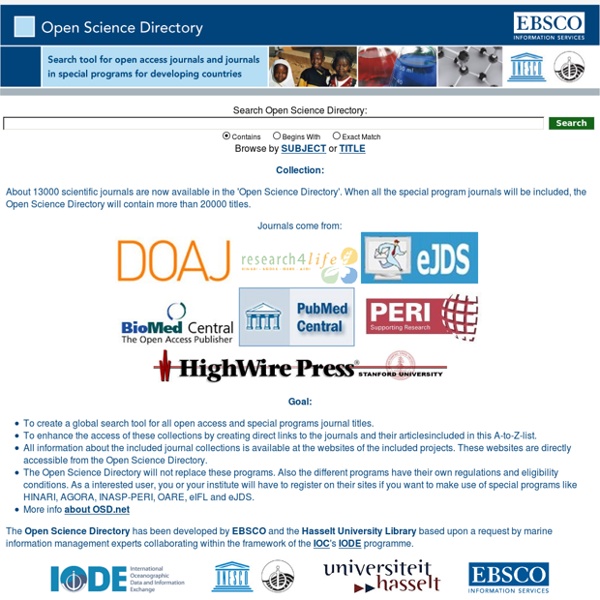 Opening Session of the 2010 Open Science Summit Bio Jason Hoyt Jason Hoyt is Vice-President, Research & Development and Chief Scientist at Mendeley. He holds a PhD in Genetics from Stanford University where he was awarded the Ruth L. Kirschstein NIH predoctoral fellowship from 2002-2007. Video: Inside the core of Patricia, the strongest recorded hurricane to strike Mexico’s west coast (Caution: the video contains a few expletives.) What’s it like to withstand the brunt of a ferocious and historic Category 5 hurricane? Josh Morgerman, an extreme storm chaser from Los Angeles, intentionally positioned himself to intercept the landfall of Patricia, which just hours prior attained the greatest intensity of any hurricane ever measured by the National Hurricane Center. [The storm that stunned the world] His footage of the storm making landfall, complemented by his compelling first person narrative, is absolutely riveting.

Open Access The Case for Open Access Open Access (OA) stands for unrestricted access and unrestricted reuse. Here’s why that matters. Most publishers own the rights to the articles in their journals. Open science is a research accelerator : Nature Chemistry In 2006 a website (on The Synaptic Leap forum) was started in which the problem of the production of PZQ as a single enantiomer was laid out7. There was some initial traffic, but there was little substantial community input. It is a fallacy that open-source products simply emerge — there are usually kernels of activity arising from funded work, to which the community then responds8. In mid-2008 the PZQ project was funded by a partnership between the World Health Organization and the Australian Government that enabled preliminary experiments to be performed and all data deposited in an open-source online electronic lab notebook (ELN) which could be properly curated9.

» Social Science, Socialist Scientists, and the Future of Utopias blog.castac.org As space colonization becomes a more serious project and an influential utopian imaginary, I am reminded of British scientist and communist JD Bernal’s 1929 warning about “human dimorphism”: Bernal wondered about a future in which “mechanizers” would live an enhanced, technoscientifically-evolved form of life, separated from the “humanizers,” the masses whose physical needs would be equally gratified thanks to scientific advancements—but who would prefer to exist in an atavistic human way, enjoying mundanities such as friendliness, poetry, dancing, drinking, singing, and art. His figure for that version of the good life seems to have been filched from whatever exposure he had to colonial anthropology—he calls it the “idyllic, Melanesian existence.” Image: The assembly of the ‘Stanford Torus’ space colony design. By Don Davis for NASA. There are alternative and instructive histories, as well as an important present, buried in these entanglements with utopia, science, and the left.

Oxford Open Oxford Open OUP Supports Open Access Oxford University Press (OUP) is mission-driven to facilitate the widest possible dissemination of high-quality research. We embrace both green and gold open access (OA) publishing to support this mission. A Proven Track Record of Success OUP has been publishing OA content since 2004. OAIster Access to OAIster A freely accessible site for searching only OAIster records is available at Additionally, OAIster records are fully accessible through WorldCat.org, and appear as WorldCat.org search results along with records from thousands of libraries worldwide. The OAIster database is searchable on the OCLC FirstSearch service, providing another valuable access point for this rich database and a complement to other FirstSearch databases.

The Open Science Movement - KQED QUEST Citizen scientists solved the structure of a viral protein that had been stumping scientists for a decade using the video game Foldit. As I have talked about previously, science is a pretty closed system. Scientists do all the work pretty much in secrecy until they are ready to present a polished story. They then present their results to each other in a language only they can understand. Everyone else then has to count on the media to provide updates on what scientists have discovered.

The Life of a Clinical-Trial Guinea Pig At some point during the fall of 2005, Brian Stone grew tired of throwing up in a bucket and decided to go rogue. Stone (who requested that his real name not be used) was doing his vomiting three days a week at an inpatient clinical-trial site in his hometown of Columbus, Ohio, following a tip he’d gotten from a stranger at a bar. “He had quite a few to drink,” Stone recalled, “and he was yakking about a place where he could get paid $2,500 just to do painkillers and drink alcohol. And everyone was laughing at him, like, ‘You’re full of shit.’” As it turned out, he wasn’t.

‘Open Science’ Challenges Journal Tradition With Web Collaboration For centuries, this is how science has operated — through research done in private, then submitted to science and medical journals to be reviewed by peers and published for the benefit of other researchers and the public at large. But to many scientists, the longevity of that process is nothing to celebrate. The system is hidebound, expensive and elitist, they say. Peer review can take months, journal subscriptions can be prohibitively costly, and a handful of gatekeepers limit the flow of information. It is an ideal system for sharing knowledge, said the quantum physicist Michael Nielsen, only “if you’re stuck with 17th-century technology.”