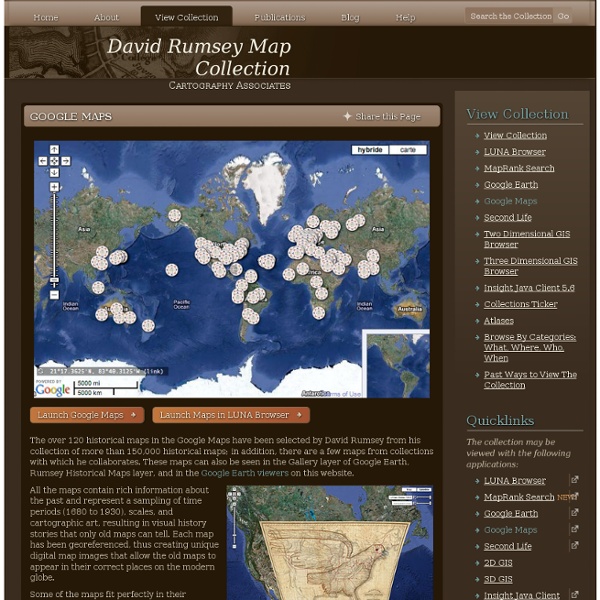 Launch Google MapsLaunch Maps in LUNA Browser The over 120 historical maps in the Google Maps have been selected by David Rumsey from his collection of more than 150,000 historical maps; in addition, there are a few maps from collections with which he collaborates. These maps can also be seen in the Gallery layer of Google Earth, Rumsey Historical Maps layer, and in the Google Earth viewers on this website. All the maps contain rich information about the past and represent a sampling of time periods (1680 to 1930), scales, and cartographic art, resulting in visual history stories that only old maps can tell. Each map has been georeferenced, thus creating unique digital map images that allow the old maps to appear in their correct places on the modern globe. The original historical maps are first made into digital images by scanning them with high resolution digital cameras. Processing and hosting of the Rumsey Historical Maps in Google Maps is provided by Geogarage.

The French Revolution In 1774 the king of France Louis XV passed away. He had been on the throne for nearly sixty years, since succeeding his great-grandfather Louis XIV, the Sun King at the age of five in 1715. During most of that time the royal finances had been in a perilous state. Severely depleted by Louis XIV's schemes for the greater glory of the French monarchy, they were been further drained by the major wars of the century (Spanish Succession, Austrian Succession, Seven Years' War). The French monarchy, however, was ill-equipped to put into effect any necessary reforms.

How to Create a Timeline in Excel There are many ways to create a timeline in Excel. Some methods use drawing tools or bar charts, as in my other timeline examples. Another popular method, especially for project timelines, is to use a gantt chart. This page descibes a method that I developed to create timelines quickly in Excel using an XY scatter chart with events as the data labels. Continue reading below to learn how to create the timeline from scratch, or save time by downloading the timeline template. Advertisement The Maps of Heinrich Kiepert The Maps of Heinrich Kiepert Geographer Heinrich Kiepert (1818-1899) is generally reckoned one of the more important scholarly cartographers of the second half of the 19th century. This Web page provides access to some Kiepert maps held at the University of Chicago Library's Map Collection.

Greece timeline A chronology of key events: 1924 - Greeks vote for abolition of the monarchy, country becomes republic. 1935 - Monarchy restored. 1936 - General Metaxas appointed prime minister by king, establishes right-wing dictatorship. 1940 - Mussolini's forces attack Greece from Italian-held Albania, but are repelled. 1941 - Metaxas dies. Periodis Web - Maps to be Used for the History of Europe Euratlas Periodis Web shows the history of Europe through a sequence of 21 historical maps, every map depicting the political situation at the end of each century. Here, on the left, are 21 mini-maps giving access to 21 full maps and to 84 quarters of maps with more detailed views of the states, provinces and main cities.Moreover, each map offers a historical gazetteer. Thus you can highlight in red each sovereign state and in green each dependent entity. See the Map Legend for more details. Navigation through the atlas is easy: on the left side of the pages, you simply need to choose a century for temporal navigation.

Infographics - Own your Information I am a Visual Arts teacher, just so you might start to understand my next comment. I love good Infographics ! I can not think of another technique that condenses the essence of a message down into a more accessible and easily understood medium. I love the way that; - the graphic can be the of hero the story - simple images can tell complicated stories - the combination of graphics and facts can explain a complex concept - facts and figures can be portrayed in an exciting and visually appealing way - the portrayal of the information becomes as important as the message Sometimes I think it is this last point that interests me the most.

Ancient Roman History Timeline Provides a chronological index of the history of Ancient Rome with extensive links to internet resources. Emphasis is placed upon the use of primary source material, numismatics, and a focus upon the roles of women in ancient time. scroll down for the timeline The Romans: From Village to Empire (2nd edition; 2011) A second edition of Mary T. Boatwright, Daniel J. Gargola, Noel Lenski, Richard J. A.