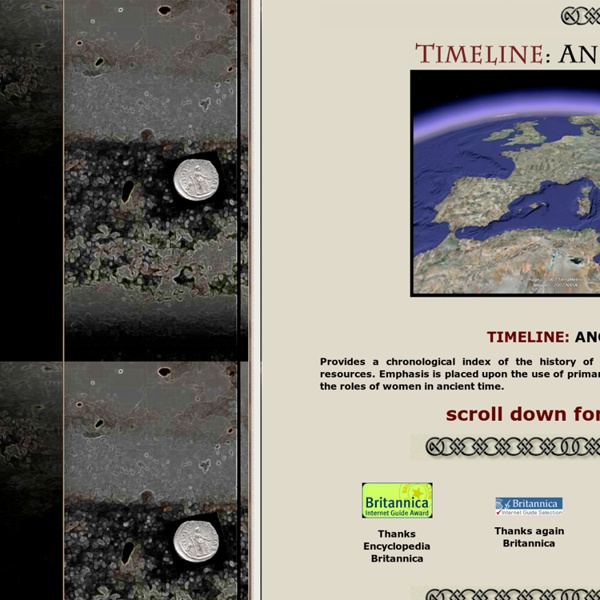 Provides a chronological index of the history of Ancient Rome with extensive links to internet resources. Emphasis is placed upon the use of primary source material, numismatics, and a focus upon the roles of women in ancient time. scroll down for the timeline Thank you for visiting! Timeline Menu Ridley Scott's GLADIATOR is a great film. Is it great history? Click here to learn the real story behind the events and characters portrayed in the movie. Kindly report any suggestions, problems, errors, or dead links by emailing david(at)exovedate.com Using info from this site? For detailed copyright information and bibliographic citation, click here contact the author by emailing david(at)exovedate.com (note: replace (at) with the @ symbol) Copyright © David Neelin: All Rights Reserved c. 2nd Millennium BCE || Archeological Remains Archeology reveals human remains, elk bones, bronze artifacts (rings, axes, etc.) c. 1st Millennium BCE || The Etruscans 753 BCE || Legendary Founding of Rome then later:

How to Create a Timeline in Excel There are many ways to create a timeline in Excel. Some methods use drawing tools or bar charts, as in my other timeline examples. Another popular method, especially for project timelines, is to use a gantt chart. History of Iran: Achaemenid Empire Achaemenid Empire By 546 BCE, Cyrus the Great had defeated Croesus, the Lydian king of fabled wealth, and had secured control of the Aegean coast of Asia Minor, Armenia, and the Greek colonies along the Levant. Moving east, he took Parthia (land of the Arsacids, not to be confused with Parsa, which was to the southwest), Chorasmis, and Bactria.

Top 10 Myths About the Romans History For many, the only exposure to Ancient Rome comes from what they have seen in the movies or on television. Unfortunately, films like Gladiator, Spartacus, Barabbas, and Demetrius and the Gladiators don’t present a very accurate depiction of life in Rome and the arena. Considering the fact that the Roman Empire existed for so long, and so much of our own Western society has derived from it, it is no surprise that we all have at least one or two misconceptions about the Empire and its people. For this reason, we have put together a list of the most misconceptions people hold about the Ancient Roman society and customs.

Hadrians Wall, extent of the Roman Empire 4 pages on Hadrian's Wall One of the greatest monuments to the power - and limitations - of the Roman Empire, Hadrian's Wall ran for 73 miles across open country. Why was it built? At the time of Julius Caesar's first small invasion of the south coast of Britain in 55 BC, the British Isles, like much of mainland Europe was inhabited by many Celtic tribes loosely united by a similar language and culture but nevertheless each distinct.

Greece timeline A chronology of key events: 1924 - Greeks vote for abolition of the monarchy, country becomes republic. 1935 - Monarchy restored. Home - TimeSearch Search the Web through Timelines(and surprise yourself with what you find) Icons on the left link to Google or HistoryWorld (H) Yellow icons on the right link to related images in GoogleMove your pointer over an icon to see the search terms To start at Big Bang just click Go (above)To go to a specific period enter a year (above)For a more focused timeline use the Areas and Themes menus (top left) Or you may prefer Single-subject Timelines Or try

The Achaemenid Persian Empire (550–330 B.C.) The Achaemenid Persian empire was the largest that the ancient world had seen, extending from Anatolia and Egypt across western Asia to northern India and Central Asia. Its formation began in 550 B.C., when King Astyages of Media, who dominated much of Iran and eastern Anatolia (Turkey), was defeated by his southern neighbor Cyrus II ("the Great"), king of Persia (r. 559–530 B.C.). This upset the balance of power in the Near East. The Lydians of western Anatolia under King Croesus took advantage of the fall of Media to push east and clashed with Persian forces. The Lydian army withdrew for the winter but the Persians advanced to the Lydian capital at Sardis, which fell after a two-week siege. The Lydians had been allied with the Babylonians and Egyptians and Cyrus now had to confront these major powers.