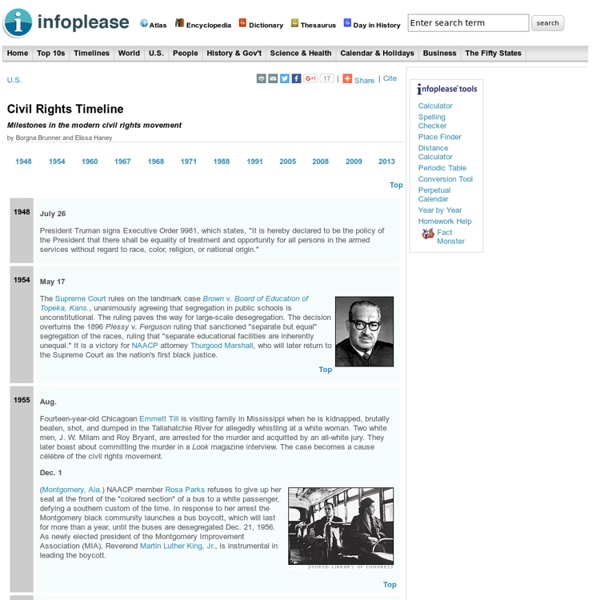 Jan. 23 The 24th Amendment abolishes the poll tax, which originally had been instituted in 11 southern states after Reconstruction to make it difficult for poor blacks to vote. Summer The Council of Federated Organizations (COFO), a network of civil rights groups that includes CORE and SNCC, launches a massive effort to register black voters during what becomes known as the Freedom Summer. It also sends delegates to the Democratic National Convention to protest—and attempt to unseat—the official all-white Mississippi contingent. July 2 President Johnson signs the Civil Rights Act of 1964. Aug. 4 (Neshoba Country, Miss.)

List of timelines From Wikipedia, the free encyclopedia This is a list of timelines currently on Wikipedia. §Types[edit] §General timelines[edit] §History[edit] §Arts[edit] Civil Rights Movement: "Black Power" Era Summary & Analysis A Carefully Planned March Many of the people involved in the planning of the March on Washington worried that something might go wrong. Organizers paid close attention to each and every detail, from the path of the procession to the placement of portable toilets and water fountains throughout the capital grounds. They carefully selected each speaker, pre-approved each speech, and in some cases censored what they considered to be radical content.

The Haudenosaunee Creation Story Keller George, Wolf Clan Member of the Nation's Council, relates the following story his maternal great-grandmother told to him about the birth of the Evil Spirit and the Good Sprit. Long, long ago, the earth was deep beneath the water. There was a great darkness because no sun or moon or stars shone. The only creatures living in this dark world were water animals such as the beaver, muskrat, duck and loon. Far above the water-covered earth was the Land of the Happy Spirits, where the Great Spirit dwelled. Geologic time scale Online exhibits Geologic time scale Take a journey back through the history of the Earth — jump to a specific time period using the time scale below and examine ancient life, climates, and geography.

Civil Rights Movement In the early 1960s, the fundamental prize sought by the civil rights movement was something that African Americans had never known: full legal equality. When John F. Kennedy became president in 1961, African Americans throughout much of the South were denied the right to vote, barred from public facilities, subjected to insults and violence, and could not expect justice from the courts. In the North, black Americans also faced discrimination in housing, employment, education, and many other areas. But the civil rights movement had made important progress, and change was on the way.

American civil rights movement American civil rights movement, March on WashingtonUPI/Bettmann/Corbismass protest movement against racial segregation and discrimination in the southern United States that came to national prominence during the mid-1950s. This movement had its roots in the centuries-long efforts of African slaves and their descendants to resist racial oppression and abolish the institution of slavery. Although American slaves were emancipated as a result of the Civil War and were then granted basic civil rights through the passage of the Fourteenth and Fifteenth amendments to the U.S. Constitution, struggles to secure federal protection of these rights continued during the next century. Through nonviolent protest, the civil rights movement of the 1950s and ’60s broke the pattern of public facilities’ being segregated by “race” in the South and achieved the most important breakthrough in equal-rights legislation for African Americans since the Reconstruction period (1865–77).

Brief Timeline of American Literature and Events, 1620-1920 Brief Timeline of American Literature and Events: Pre-1620 to 1920 This timeline provides a short chronology of events in American history and literature. It is linked to course pages and bibliographies as well as to a set of more general linked resources: pages on American authors, literary movements, and American literature sites. Independent Lens . FEBRUARY ONE . Civil Rights and Non-Violence At the heart of the U.S. Civil Rights Movement in the 1950s and 1960s was the use of nonviolent direct-action protest, including the student sit-ins portrayed in FEBRUARY ONE. Inspired by the example of Jesus, and the teachings of Mahatma Gandhi during India’s struggle for independence, black church and community leaders in the United States began advocating the use of non-violence in their own struggle.

Ferguson shooting: State of emergency, curfew declared as tensions escalate again over fatal shooting of black teenager Updated Missouri governor Jay Nixon has announced a state of emergency in Ferguson, Missouri, after a week of racially-charged protests following the fatal shooting of an unarmed black teenager by a white police officer. Speaking at a church near Ferguson, Mr Nixon said the eyes of the world were watching the suburban St Louis community, which has been hit by unrest since the shooting of 18-year-old Michael Brown on August 9. "This is the test of whether a community – this community, any community – can break the cycle of fear, distrust and violence, and replace them [sic] with peace, strength and, ultimately, justice," he said. Highway Patrol captain Ron Johnson, who is now overseeing security in Ferguson, said a curfew from midnight until 5:00am will be in place until further notice. The unrest erupted after Ferguson police officer Darren Wilson, 28, shot and killed the teenager last Saturday.

Voices of Struggle: The Civil Rights movement, 1945 to 1965 Video: The Freedom Singers in performance on August 10, 1996 in Washington, D.C. We honor African-American history and music with a look at the profound cultural contribution of the Civil Rights Movement, called by Guy Carawan "the greatest singing movement this country has experienced." The African American struggle for civil rights and equality inspired the many other socio-political movements in the USA and around the world. Songs of the Movement and Their Sources

Rubin Stacy Jerome Wilson, Franklington, Kentucky (January 11 1935) Anderson Ward, Maringuoin, Louisiana (March 3 1935) Abe Young, Slayden, Mississippi (March 12 1935) Daughter of Rev. A. B. Brookins, Poinsett, Arkansas (March 21 1935) Rev. T. A. Geologic and Biological Timeline of the Earth Astronomical and geological evidence indicates that the Universe is approximately 13,700 million years old, and our solar system is about 4,567 million years old. Earth's Moon formed 4,450 million years ago, just 50 million years after the Earth's formation. Because the composition of the rocks retrieved from the Moon by the Apollo missions is very similar to rocks from the Earth, it is thought that the Moon formed as a result of a collision between the young Earth and a Mars-sized body, sometimes called Theia, which accreted at a Lagrangian point 60° ahead or behind the Earth. A cataclysmic meteorite bombardment (the Late Heavy Bombardment) of the Moon and the Earth 3,900 million years ago is thought to have been caused by impacts of planetesimals which were originally beyond the Earth, but whose orbits were destabilized by the migration of Jupiter and Saturn during the formation of the solar system. Simplified model of the formation of the Moon (my = millions of years)