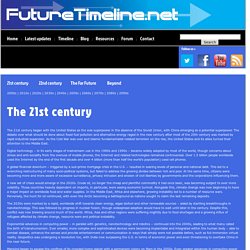 The debate over what should be done about fossil fuel pollution and alternative energy raged in the new century after most of the 20th century was marked by rapid industrial expansion. As the Cold War was over and Islamic fundamentalist-related terrorism on the rise, the United States and its allies turned their attention to the Middle East. The Future of Food & Nutrition - Culture, Economics & Politics of the Future - FutureTimeline.forum. Future of Food? - Culture, Economics & Politics of the Future - FutureTimeline.forum. Didn't know where else to put this, and also couldn't find any other topics related to this. 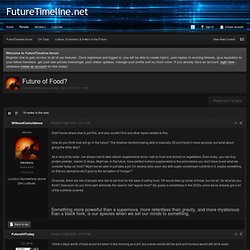 How do you think food will go in the future? The timeline mentions being able to basically 3D print food in mere seconds, but what about going the other way? As a very picky eater, I've always had to take vitamin supplements since I eat no fruits and almost no vegetables. Even today, you can buy protein powder, vitamin D drops. UV light in food storage could double shelf life. 6th June 2013 UV light in food storage could double shelf life Researchers in the U.S. have doubled the shelf life of strawberries, using a new device that could soon be commercialised for home refrigerators. 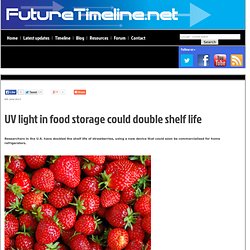 A team from the U.S. Department of Agriculture (USDA) and Sensor Electronic Technology, Inc. (SETi) demonstrated that low irradiance ultra-violet (UV) light exposure of strawberries in low temperature and very high humidity – typical home refrigerator conditions – can delay spoilage over long periods. The results, to be presented next week at the Conference on Lasers and Electro-Optics (CLEO: 2013), are significant because previous attempts using traditional UV light sources for storage of produce resulted in severe drying, and it was unknown if the advantages of long exposure to low-level UV light would be effective against rot. 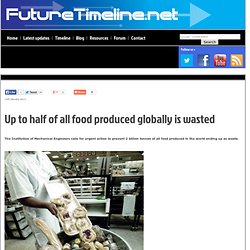 The future of food and calorie intake:Will we eat more or less? - Images and Videos - FutureTimeline.forum. I don't eat anything that pre-agricultural humans didn't eat, except for needed medications, caffeine and pure ethanol. 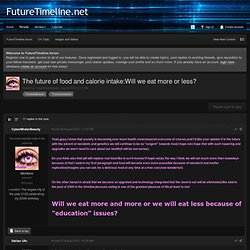 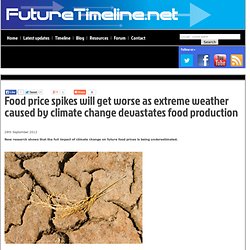 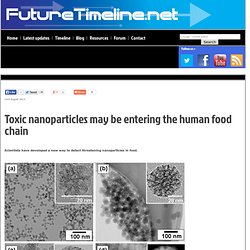 Over the last few years, the use of nanomaterials for water treatment, food packaging, pesticides, cosmetics and other industries has increased. For example, farmers have used silver nanoparticles as a pesticide because of their capability to suppress the growth of harmful organisms. However, a growing concern is that these particles could pose a potential health risk to humans and the environment. “More than 1,000 products on the market are nanotechnology-based products,” said Mengshi Lin, associate professor of food science in the MU College of Agriculture, Food and Natural Resources. Automated Food Production - Science & Technology of the Future - FutureTimeline.forum. 2013 Technology Trends. North Korea conducts its third nuclear test On 12th February 2013, North Korean state media announced it had conducted an underground nuclear test, its third in seven years.* A tremor that showed a nuclear bomb signature with magnitude 4.9 (later revised to 5.1) was detected by the China Earthquake Networks Centre, the Comprehensive Nuclear-Test-Ban Treaty Organisation Preparatory Commission and the U.S. 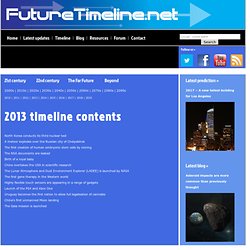 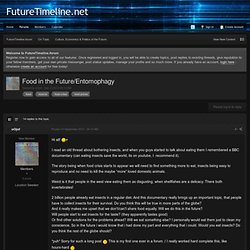 I read an old thread about bothering insects, and when you guys started to talk about eating them I remembered a BBC documentary (can eating insects save the world, its on youtube, I recommend it). The story being when food crisis starts to appear we will need to find something more to eat, insects being easy to reproduce and no need to kill the maybe “more” loved domestic animals. Weird is it that people in the west view eating them as disgusting, when shellfishes are a delicacy. There both invertebrates!