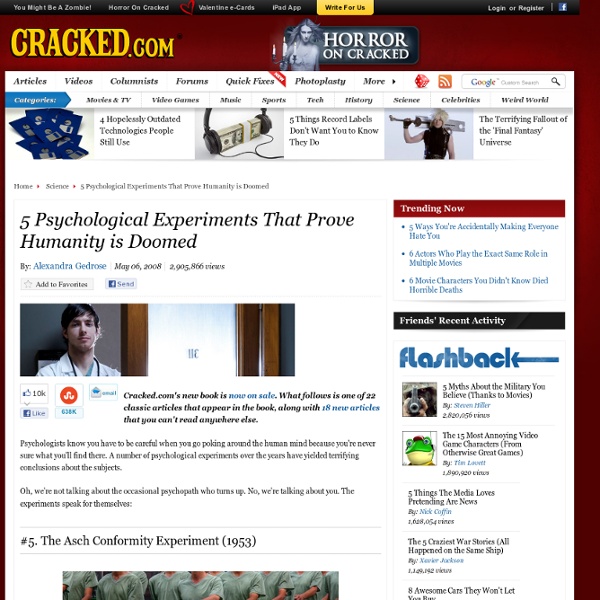 Cracked.com's new book is now on sale. What follows is one of 22 classic articles that appear in the book, along with 18 new articles that you can't read anywhere else. Psychologists know you have to be careful when you go poking around the human mind because you're never sure what you'll find there. A number of psychological experiments over the years have yielded terrifying conclusions about the subjects. Oh, we're not talking about the occasional psychopath who turns up. No, we're talking about you. The Asch Conformity Experiment (1953) The Setup: Solomon Asch wanted to run a series of studies that would document the power of conformity, for the purpose of depressing everyone who would ever read the results. Subjects were told that they would be taking part in a vision test, along with a handful of people. The Result: Questions the subjects were asked were like the puzzle shown here: All they had to do was say which line on the right matched the one on the left. "Wait, you're right! C.

Ten Psychology Studies from 2009 Worth Knowing About - David DiSalvo - Brainspin Image by AFP/Getty Images via Daylife Several great psychology and neuroscience studies were published in 2009. Below I’ve chosen 10 that I think are among the most noteworthy, not just because they’re interesting, but useful as well. 1. “Doomsday Seed Vault” in the Arctic – Bill Gates, Rockefeller and the GMO giants know something we don’t (2007) One thing Microsoft founder Bill Gates can’t be accused of is sloth. He was already programming at 14, founded Microsoft at age 20 while still a student at Harvard. By 1995 he had been listed by Forbes as the world’s richest man from being the largest shareholder in his Microsoft, a company which his relentless drive built into a de facto monopoly in software systems for personal computers. In 2006 when most people in such a situation might think of retiring to a quiet Pacific island, Bill Gates decided to devote his energies to his Bill and Melinda Gates Foundation, the world’s largest ‘transparent’ private foundation as it says, with a whopping $34.6 billion endowment and a legal necessity to spend $1.5 billion a year on charitable projects around the world to maintain its tax free charitable status. So when Bill Gates decides through the Gates Foundation to invest some $30 million of their hard earned money in a project, it is worth looking at.

48. How Renaissance People Think Do you think like a polymath? Here's a quick test: If you cringed as you read the question and thought to yourself " ", then you're on the polymath path. According to psychologist Seymour Epstein's cognitive-experiential self-theory, humans have two parallel but interacting modes of information processing. The system is analytic, logical, abstract, and requires justification via logic and evidence. In contrast, the system is holistic, affective, concrete, experienced passively, processes information automatically, and is self-evidently valid (experience alone is enough for belief). 47 Mind-Blowing Psychology-Proven Facts You Should Know About Yourself I’ve decided to start a series called 100 Things You Should Know about People. As in: 100 things you should know if you are going to design an effective and persuasive website, web application or software application. Or maybe just 100 things that everyone should know about humans!

Ten Politically Incorrect Truths About Human Nature Human nature is one of those things that everybody talks about but no one can define precisely. Every time we fall in love, fight with our spouse, get upset about the influx of immigrants into our country, or go to church, we are, in part, behaving as a human animal with our own unique evolved nature—human nature. This means two things. First, our thoughts, feelings, and behavior are produced not only by our individual experiences and environment in our own lifetime but also by what happened to our ancestors millions of years ago.

Does the comfort of conformity ease thoughts of death? - life - 25 February 2011 AS THE light at the end of the tunnel approaches, the need to belong to a group and be near loved ones may be among your final thoughts. So say Markus Quirin and his colleagues at the University of Osnabrück in Germany. The team prompted thoughts of death in 17 young men with an average age of 23 by asking them whether they agreed or disagreed with a series of statements such as "I am afraid of dying a painful death". At the same time, the men's brain activity was monitored using a functional MRI scanner. 10 Reasons an Artificial Intelligence Wouldn't Turn Evil Awesome post.. I'm now more afraid of having my limbs chopped off, despite your skilled arguments against such a fate. Some general thoughts on the matter - I see no reason why an AI, or any set of AIs, wouldn't be susceptible to some form of irrationality, or even emotions of a very alien kind. In particular, this seems more plausible if much of the AI is assembled via evolutionary processes. Imagine an AI learning how to interact with humans via Internet discussions/comments.

13. Six Clues to Character Seconds after Tamara was ushered into his office, Michael knew she was right for the creative staff of the advertising team he ran. Within a year, they were not only a productive duo professionally, they were dating. She soon jumped to another agency largely so they could live together openly.