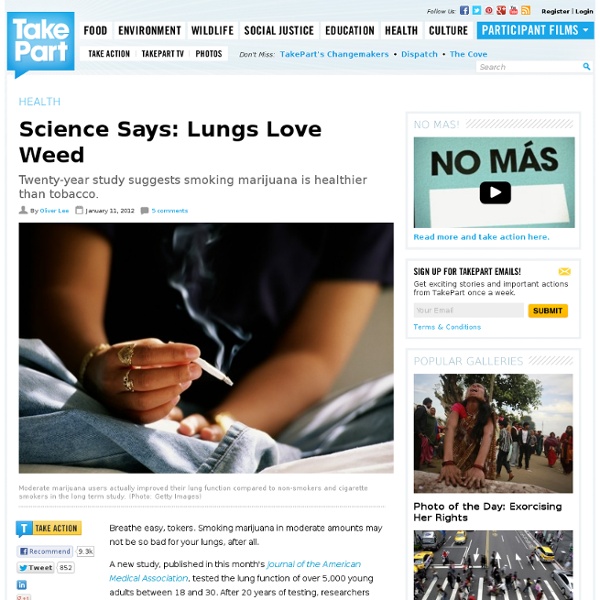 Breathe easy, tokers. Smoking marijuana in moderate amounts may not be so bad for your lungs, after all. A new study, published in this month's Journal of the American Medical Association, tested the lung function of over 5,000 young adults between 18 and 30 to determine marijuana's effect on lungs. After 20 years of testing, researchers found some buzzworthy results: regular marijuana smokers (defined by up to a joint a day for seven years) had no discernable impairment in lung activity from non-smokers. In fact, researchers were surprised to find marijuana smokers performed slightly better than both smokers and non-smokers on the lung performance test. Why? MORE: 5 Reasons Not to Smoke Synthetic Weed For most of human existence, cannabis has been considered a medicine. Attitudes are changing, however. As marijuana enters the mainstream, studies like the one published in JAMA might dispel false assertions about the plant's deleterious health hazards and promote its medicinal benefits.

And Their Fascinating History February 9, 2012 | Like this article? Join our email list: Five Scientific Conclusions About Cannabis That The Mainstream Media Doesn’t Want You To Know Photo Credit: N.ico via Flickr July 29, 2012 | Like this article? Join our email list: What are the real risks of taking cannabis? By Richard Shrubb The right wing press would have you believe that cannabis makes you a psychotic knife wielding monster, about to progress through the gateway to a lonely death from an OD on heroin and crack cocaine speedballs. Never believe everything you read in the papers … Many years ago I was surprised to be told by a professor of psychiatry while researching an article, that smoking pot didn’t actually cause my schizophrenia – I was going to get the illness whether I liked it or not. In 1998 a seminar paper was published in The Lancet. With science one really should look for the latest findings – 14 years is a bloody long time in medical research. It hedges its bets where knowledge is patchy but broadly sums up what is still generally understood to this day.

Study: No lung danger from casual pot smoking Add one more data point to the decades-old debate over marijuana legalization: A new study concludes that casual pot smoking - up to one joint per day - does not affect the functioning of your lungs. The study, published in the Jan. 11 edition of Journal of the American Medical Association, also offered up a nugget that likely will surprise many: Evidence points to slight increases in lung airflow rates and increases in lung volume from occasional marijuana use. Air flow is the amount of air someone can blow out of their lungs one second after taking the deepest breath possible. The volume measure is the total amount of air blown out once someone has taken the deepest breath possible. Association Between Marijuana Exposure and Pulmonary Function Over 20 Years

Marijuana And Cancer: Scientists Find Cannabis Compound Stops Metastasis In Aggressive Cancers A pair of scientists at California Pacific Medical Center in San Francisco has found that a compound derived from marijuana could stop metastasis in many kinds of aggressive cancer, potentially altering the fatality of the disease forever. "It took us about 20 years of research to figure this out, but we are very excited," said Pierre Desprez, one of the scientists behind the discovery, to The Huffington Post. "We want to get started with trials as soon as possible." 13 Strange Highs from Around the World Maybe it’s pessimistic, but when it comes to what people will do to exit their sober minds, I’m rarely surprised. Getting high is an ancient practice for humans, and it will always have a presence in society. At the height of desperation, there simply are no boundaries to the pursuit of inebriation.

Local cannabis company announces success with cancer treatment Denver-based Cannabis Science, Inc. announced this week that a cancer patient has had success using the company’s cannabis-based product in the treatment of skin cancer. The biotech company, which develops pharmaceutical cannabis products, said this is the second patient to use the product successfully. “This patient has photo-documented dramatic results that we will release to the public once treatment is completed and has been properly vetted by clinical biopsy,” the company said in a press release. “Cannabis Science, in conjunction with several Colorado-licensed dispensaries and physicians, consults with a number of cancer patients who were seeking to inform themselves of the current peer-reviewed scientific literature, regarding modern and historical use of cannabis preparations for treating cancers so that they can make informed decisions regarding their self-directed cancer treatment.” More from the press release: Crouse has leukemia.