Four Horsemen of the Apocalypse 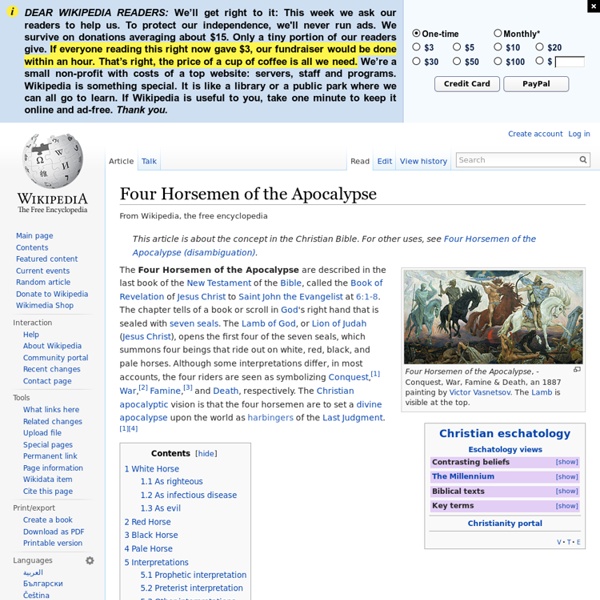 Four Horsemen of the Apocalypse, - Conquest, War, Famine & Death, an 1887 painting by Victor Vasnetsov. The Lamb is visible at the top. White Horse[edit] Then I saw when the Lamb broke one of the seven seals, and I heard one of the four living creatures saying as with a voice of thunder, “Come.” The rider has also been called "Pestilence", particularly in pop culture (see below). As righteous[edit] Irenaeus, an influential Christian theologian of the 2nd century, was among the first to interpret this horseman as Christ himself, his white horse representing the successful spread of the gospel.[3] Various scholars have since supported this notion,[5] citing the later appearance, in Revelation 19, of Christ mounted on a white horse, appearing as The Word of God. As infectious disease[edit] Under this interpretation, the first horseman is called Pestilence, and is associated with infectious disease and plague. As evil[edit] Red Horse[edit] Black Horse[edit] Pale Horse[edit] Interpretations[edit]

Religious symbol See religious symbolism for other meanings. A religious symbol is an iconic representation intended to represent a specific religion, or a specific concept within a given religion. The Christian cross has traditionally been a symbol representing Christianity or Christendom as a whole. In the course of cultural relativism as it developed in the western world in the late 20th century, there have been efforts to design comparable "symbols" representing all of the world's religions. Similarly, the United States Department of Veterans Affairs emblems for headstones and markers have been considerably expanded after a lawsuit was filed by Wiccans in 2006 (Stewart v. Symbols representing a specific religion[edit] Symbolic representation of a specific religious tradition is useful in a society with religious pluralism, as was the case in the Roman Empire, and again in modern multiculturalism. See also[edit] References[edit] Baer, Hans A. (1998). External links[edit]

Christian angelic hierarchy For other angelic hierarchies, see Hierarchy of angels. Orthodox icon of nine orders of angels. The most influential Christian angelic hierarchy was that put forward by Pseudo-Dionysius the Areopagite in the 4th or 5th century in his book De Coelesti Hierarchia (On the Celestial Hierarchy). During the Middle Ages, many schemes were proposed, some drawing on and expanding on Pseudo-Dionysius, others suggesting completely different classifications. According to medieval Christian theologians, the angels are organized into several orders, or "Angelic Choirs".[1][2] Pseudo-Dionysius (On the Celestial Hierarchy) and Thomas Aquinas (Summa Theologica) drew on passages from the New Testament, specifically Ephesians 1:21 and Colossians 1:16, to develop a schema of three Hierarchies, Spheres or Triads of angels, with each Hierarchy containing three Orders or Choirs. First Sphere[edit] The first sphere angels serve as the heavenly servants of God the Son incarnated. Seraphim[edit] Cherubim[edit] St. C.