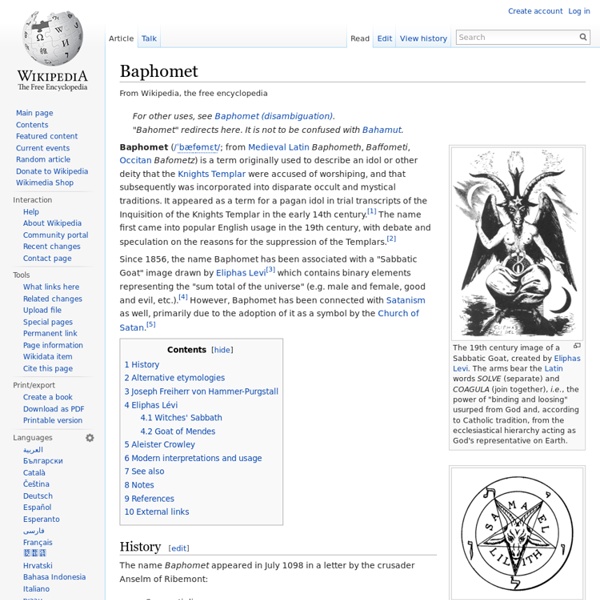 "Bahomet" redirects here. It is not to be confused with Bahamut. The 19th century image of a Sabbatic Goat, created by Eliphas Levi. The arms bear the Latin words SOLVE (separate) and COAGULA (join together), i.e., the power of "binding and loosing" usurped from God and, according to Catholic tradition, from the ecclesiastical hierarchy acting as God's representative on Earth. The original goat pentagram first appeared in the book "La Clef de la Magie Noire" by French occultist Stanislas de Guaita, in 1897. This symbol would later become synonymous with Baphomet, and is commonly referred to as the Goat of Mendes or Sabbatic Goat. Baphomet (/ˈbæfɵmɛt/; from Medieval Latin Baphometh, Baffometi, Occitan Bafometz) is a term originally used to describe an idol or other deity that the Knights Templar were accused of worshiping, and that subsequently was incorporated into disparate occult and mystical traditions. §History[edit] The name Baphomet comes up in several of these confessions.

Infinity Imagined A stereo image of Jupiter’s atmosphere, derived from data collected by the Juno spacecraft during perijove 3. These images, taken at different point in the orbit, can be combined to reveal the 3D structure and relief of clouds in the southern atmosphere. To see the image in 3D, relax the eyes until the white circles overlap, then look at the image. Image source: NASA Processing: James Tyrwhitt-Drake (Source: missionjuno.swri.edu) Baba Yaga Andreas Johns identifies Baba Yaga as "one of the most memorable and distinctive figures in eastern European folklore," and observes that she is "enigmatic" and often exhibits "striking ambiguity." Johns summarizes Baba Yaga as a "a many-faceted figure, capable of inspiring researchers to see her as a Cloud, Moon, Death, Winter, Snake, Bird, Pelican or Earth Goddess, totemic matriarchal ancestress, female initiator, phallic mother, or archetypal image". Etymology[edit] Variations of the name Baba Yaga are found in the languages of the Eastern Slavic peoples. The first element, baba, is transparently a babble word. In Old Russian, baba may mean 'midwife', 'sorceress', or 'fortune teller'. These associations have led to variety of theories on the figure of Baba Yaga, though the presence of the element baba may have simply been taken as its primary meaning of 'grandmother' or 'old woman'. Folklore[edit] The heroine Vasilisa outside of the hut of Baba Yaga as depicted by Ivan Bilibin (1902)

Christian mysticism Christian mysticism refers to the development of mystical practices and theory within Christianity. It has often been connected to mystical theology, especially in the Catholic and Eastern Orthodox traditions. The attributes and means by which Christian mysticism is studied and practiced are varied and range from ecstatic visions of the soul's mystical union with God to simple prayerful contemplation of Holy Scripture (i.e., Lectio Divina). Etymology[edit] "Mysticism" is derived from the Greek μυω, meaning "to conceal",[1] and its derivative μυστικός, mystikos, meaning 'an initiate'. In the Hellenistic world, a "mystikos" was an initiate of a mystery religion. In early Christianity the term "mystikos" referred to three dimensions, which soon became intertwined, namely the biblical, the liturgical and the spiritual or contemplative. Definition[edit] Presence[edit] Presence versus experience[edit] Personal transformation[edit] Social constructionism[edit] Development[edit] Gospels[edit]

Wicca This pentacle, worn as a pendant, depicts a pentagram, or five-pointed star, used as a symbol of Wicca by many adherents. Wicca is a diverse religion with no central authority or figure defining it. It is divided into various lineages and denominations, referred to as traditions, each with its own organisational structure and level of centralisation. Terminology[edit] Application of the word Wicca has given rise to "a great deal of disagreement and infighting". Beliefs[edit] Beliefs vary markedly between different traditions and individual practitioners. Theology[edit] Altar statues of the Horned God and Mother Goddess crafted by Bel Bucca and owned by the "Mother of Wicca", Doreen Valiente Duotheism[edit] The God and the Goddess[edit] For most Wiccans, the God and Goddess are seen as complementary polarities in the universe that balance one another out, and in this manner they have been compared to the concept of yin and yang found in Taoism. Pantheism, polytheism and animism[edit]

Zhangzhung Zhangzhung (Tibetan: ཞང་ཞུང་ ; Tibetan pronunciation: [ɕaŋɕuŋ]; Chinese: 象雄; Chinese pinyin : Xiàngxióng) was an ancient culture and kingdom of western and northwestern Tibet, which pre-dates the culture of Tibetan Buddhism in Tibet. Zhangzhung culture is associated with the Bon religion, which in turn, has influenced the philosophies and practices of Tibetan Buddhism. Zhangzhung people are mentioned frequently in ancient Tibetan texts as the original rulers of central and western Tibet. Only in the last two decades have archaeologists been given access to do archaeological work in the areas once ruled by the Zhangzhung. Recently, a tentative match has been proposed between the Zhangzhung and an Iron Age culture now being uncovered on the Changtang plateau of northwestern Tibet. §Extent of the Zhang Zhung kingdoms[edit] Tradition has it that Zhang Zhung consisted "of three different regions: sGob-ba, the outer; Phug-pa, the inner; and Bar-ba, the middle. §History of the Zhangzhung[edit]

List of legendary creatures This is a list of legendary creatures from various historical mythologies. Entries include species of legendary creature and unique creatures, but not individuals of a particular species. A[edit] B[edit] C[edit] D[edit] E[edit] F[edit] G[edit] H[edit] I[edit] J[edit] K[edit] L[edit] M[edit] N[edit] O[edit] P[edit] Q[edit] R[edit] S[edit] T[edit] U[edit] V[edit] W[edit] X[edit] Y[edit] Z[edit] See also[edit] Language of the birds In mythology, medieval literature and occultism, the language of the birds is postulated as a mystical, perfect divine language, green language, adamic language, enochian language, angelic language or a mythical or magical language used by birds to communicate with the initiated. History[edit] In Indo-European religion, the behavior of birds has long been used for the purposes of divination by augurs. According to a suggestion by Walter Burkert, these customs may have their roots in the Paleolithic when, during the Ice Age, early humans looked for carrion by observing scavenging birds.[1] There are also examples of contemporary bird-human communication and symbiosis. Ukrainian language is known as "nightingale speech" amongst its speakers. Mythology[edit] Norse mythology[edit] In Norse mythology, the power to understand the language of the birds was a sign of great wisdom. The legendary king of Sweden Dag the Wise was so wise that he could understand what birds said. Greek mythology[edit]

Icelandic magical staves Icelandic magical staves (sigils) are symbols called Galdrastafur in Icelandic, and are credited with magical effect preserved in various grimoires dating from the 17th century and later.[1] According to the Museum of Icelandic Sorcery and Witchcraft, the effects credited to most of the staves were very relevant to the average Icelanders of the time, who were mostly subsistence farmers and had to deal with harsh climatic conditions.[1] Table of magical staves[edit] Font[edit] See also[edit] References[edit] ^ Jump up to: a b "Staves or magical signs"Jump up ^ Lbs 4375 8vo, Iceland, 1900-1949 in the National Library in ReykjavíkJump up ^ From a 17th-century grimoire, in the Antikvarisk-Topografiska Arkivet in Stockholm.Jump up ^ [1] Huld Manuscript ÍB 383 4] in the National Library in ReykjavíkJump up ^ From a 19th-century manuscript, lbs 4375 8vo, in the National Library in Reykjavík.Jump up ^ External links[edit]

Kalachakra The Kalachakra (Sanskrit: कालचक्र Kālacakra, Tibetan: དུས་ཀྱི་འཁོར་ལོ།, Wylie: dus kyi 'khor lo; Mongolian: Цогт Цагийн Хүрдэн Tsogt Tsagiin Hurden; Chinese: 時輪) is a term used in Vajrayana Buddhism that means wheel of time or "time-cycles". The word Kālacakra is usually used to refer to a very complex teaching and practice in Tibetan Buddhism. Although the teaching is very advanced and esoteric, there is a tradition of offering it to large public audiences. Kālacakra tradition[edit] The Kālacakra deity represents a buddhahood and thus omniscience. Since Kālacakra is time and everything is under the influence of time, Kālacakra knows all. The Kālacakra refers to many different traditions: for example, it is related to Hindu Shaiva, Samkhya, Vaishnava, Vedic, Upanishadic and Puranic traditions and also to Jainism. Text of the Kālacakra Tantra[edit] The Kālacakra Tantra is divided into five chapters.[4] Ground Kālacakra[edit] The first two chapters are considered the "ground Kālacakra."

Almas (cryptozoology) The Almas (Mongolian: Алмас/Almas, Bulgarian: Алмас, Chechen: Алмазы, Turkish: Albıs), Mongolian for "wild man", is a purported hominid cryptozoological species reputed to inhabit the Caucasus and Pamir Mountains of central Asia, and the Altai Mountains of southern Mongolia.[1] The creature is not currently recognized or cataloged by science. Furthermore, scientists generally reject the possibility that such mega-fauna cryptids exist, because of the improbably large numbers necessary to maintain a breeding population,[2] and because climate and food supply issues make their survival in reported habitats unlikely.[3] Almas is a singular word in Mongolian; the properly formed Turkic plural would be 'almaslar'.[4] As is typical of similar legendary creatures throughout Central Asia, Russia, Pakistan and the Caucasus, the Almas is generally considered to be more akin to "wild people" in appearance and habits than to apes (in contrast to the Yeti of the Himalayas). Tjutjuna Notes

Doppelgänger In fiction and folklore, a doppelgänger or doppelgaenger (/ˈdɒp(ə)lˌɡɛŋə/ or /-ˌɡæŋə/; German: [ˈdɔpəlˌɡɛŋɐ] ( ), literally "double-goer") is a look-alike or double of a living person who is sometimes portrayed as a harbinger of bad luck. In some traditions, a doppelgänger seen by a person's relative or friend portends illness or danger while seeing one's own doppelgänger is said to be an omen of death. In contemporary vernacular, the word doppelgänger is often used in a more general sense to identify any person that physically or perhaps even behaviorally resembles another person. Spelling[edit] The word doppelgänger is a loanword from German Doppelgänger, consisting of the two substantives Doppel (double) Gänger (walker or goer).[1][2] The singular and plural form are the same in German, but English usually prefers the plural "doppelgangers." Mythology[edit] In Norse mythology, a vardøger is a ghostly double who precedes a living person and is seen performing their actions in advance.

European witchcraft Belief in and practice of witchcraft in Europe can be traced to classical antiquity and has continuous history during the Middle Ages, culminating in the Early Modern witch hunts and giving rise to the fairy tale and popular culture "witch" stock character of modern times, as well as to the concept of the "modern witch" in Wicca and related movements of "contemporary witchcraft. History[edit] Antiquity[edit] Instances of persecution of witchcraft are documented from Classical Antiquity, paralleling evidence from the Ancient Near East and the Old Testament. In Ancient Greece, for example, Theoris, a woman of Lemnos, who is denounced by Demosthenes, was publicly tried at Athens and burned for her necromancy. In the imperial period, it is evident from many Latin authors and from the historians that Rome swarmed with occultists and diviners, many of whom in spite of the Lex Cornelia almost openly traded in poisons, and not infrequently in assassination to boot. High Middle Ages[edit]