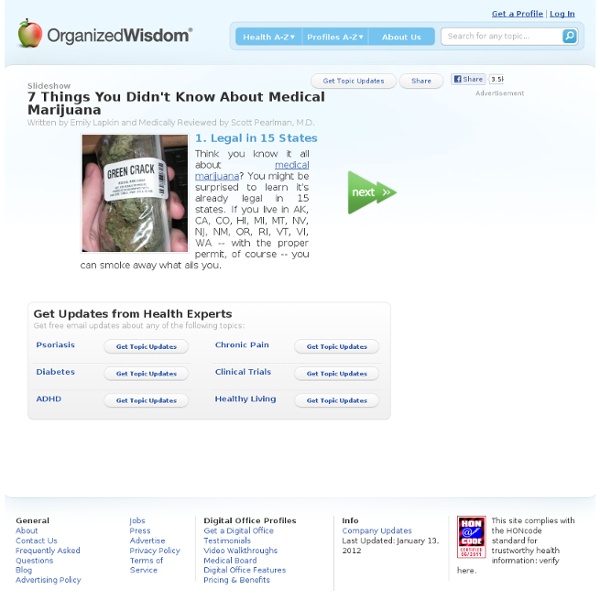 Get Topic Updates Share Slideshow Written by Emily Lapkin and Medically Reviewed by Scott Pearlman, M.D. 1. Legal in 15 States Think you know it all about medical marijuana? Advertisement

Prevention and treatment of powdery mildew on cannabis and marijuana Powdery mildew is one of the most widespread plant pests. It tends to affect flowering plants and fruit trees or bushes (roses, apple trees, etc.) as well as cannabis. The spores are in the air or on contaminated plants in the garden and can easily be drawn into your grow room by ventilators. In internet forums and cannabis cultivation books you may find lengthy lists of possible treatments that look temptingly promising for a complete recovery at all stages of mildew infestation. But the authors have rarely tested these products themselves, and the compounds are seldom differentiated between those applicable only for growth, and those also safe to use during flowering. This guide is therefore specifically orientated towards publishing some first-hand experiences with a variety of fungicides, and a review on the specific utilisation of products during growth and flowering in cannabis plants.

What cannabis actually does to your brain - io9 Chances are they would've ended up brainless morons with or without the pot. It's quite frankly not strong enough of a narcotic to destroy one's life such as you describe. It's very dependent on the user's persona. 101 Short Stories that Will Leave You Smiling, Crying and Thinking post written by: Marc Chernoff Email Since its inception eighteen months ago, our sister site Makes Me Think (MMT) has truly evolved into a remarkable online community. Every day, users share their thought-provoking life stories and vote on stories that other users have shared.

Jeff Gogue Impressive Tattoo Jeff Gogue is a tattoo artist and painter born in 1973, he’s working in Grants Hill, Colorado. He puts his stunning tattoing skills realizing large tattoos inspired by traditional japanese tattoo art and art nouveau’s classic imagery. His work is made of thick lines and realistic shadowing, all completed by a stunning use of colors. > gogueart.com

Half-Baked Idea?: Legalizing Marijuana Will Help the Environment Dear EarthTalk: I heard someone say that legalizing pot—as Californians considered doing last year—would benefit the environment. How would that be?—William T., Portland, Ore. It is well known that legalizing pot could have great economic benefits in California and elsewhere by allowing the government to tax it (like it now does on liquor and cigarettes), by ending expensive and ongoing operations to eradicate it, and by keeping millions of otherwise innocent and non-violent marijuana offenders out of already overburdened federal and state prisons. But what you might not know is that legalizing pot could also pay environmental dividends as well.

How to Grow Marijuana… What Should Your Medical Marijuana Plants’ Roots Grow In? When you look at the details on how to grow marijuana, you can get mighty confused about what your marijuana roots should grow in. Obviously they have to grow in a container, because they need to be in the dark, they need to be kept moist, they need to be fed, they need oxygen. But the choices for how you achieve the right place for your marijuana roots are many. Let’s line it out here… Jamaican Study Of Pregnant Mothers Shows That Marijuana Doesn't Harm Newborns By Janelle Stone It’s almost too taboo to discuss: pregnant women smoking marijuana. It’s a dirty little secret for women, particularly during the harrowing first trimester, who turn to cannabis for relief from nausea and stress. If you were to inquire about pot and pregnancy on the Web, Baby Center offers a strongly worded warning from Gerald Briggs, pharmacist clinical specialist. Briggs says that pot affects the baby’s growth and development and–gasp!

Ultimate Adventure Bucket List At the cold upper reaches of the Atlantic, Iceland is marked by the fiery wrath of volcanoes and the cool precision of steamrolling glaciers. It's also a spot of remarkable instability, situated right on top of the rift between the North American and European tectonic plates. Dubbed Silfra, the fissure is filled with water that, melted from glaciers and filtered through lava fields, is some of the clearest on the planet, often topping 300 feet (91 meters) of visibility. Though the water barely scrapes above freezing, it's a favorite among divers. The dive starts on a nondescript platform in the barren tundra of Thingvellir National Park, a UNESCO World Heritage site. There, divers squeeze into down-lined drysuits and plunge into the water.