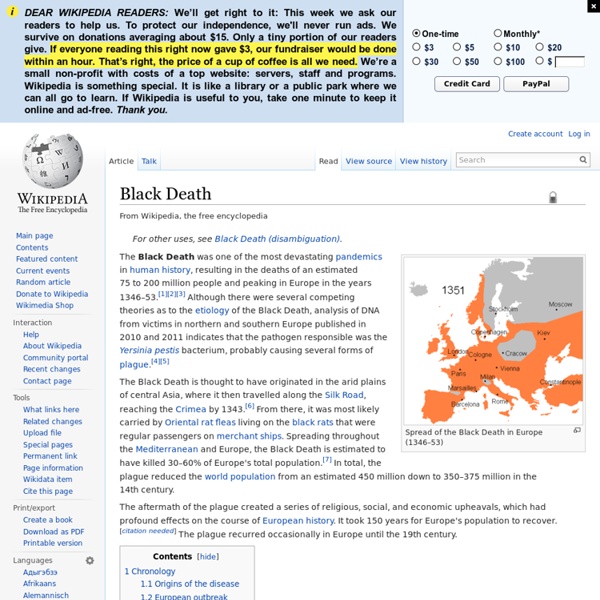 Spread of the Black Death in Europe (1346–53) The Black Death is thought to have originated in the arid plains of central Asia, where it then travelled along the Silk Road, reaching the Crimea by 1343.[6] From there, it was most likely carried by Oriental rat fleas living on the black rats that were regular passengers on merchant ships. Spreading throughout the Mediterranean and Europe, the Black Death is estimated to have killed 30–60% of Europe's total population.[7] In total, the plague reduced the world population from an estimated 450 million down to 350–375 million in the 14th century. The aftermath of the plague created a series of religious, social, and economic upheavals, which had profound effects on the course of European history. It took 150 years for Europe's population to recover.[citation needed] The plague recurred occasionally in Europe until the 19th century. Chronology Origins of the disease European outbreak There appear to have been several introductions into Europe.

List of genetic disorders The following is a list of genetic disorders and if known, causal type of mutation and the chromosome involved. The list of human genes includes genes not listed here, which also affect predisposition toward certain diseases. More common disorders Full list[edit] See also[edit] List of cutaneous conditions Mutiny on the Bounty Mutiny aboard the British Royal Navy ship HMS Bounty Bounty had left England in 1787 on a mission to collect and transport breadfruit plants from Tahiti to the West Indies. A five-month layover in Tahiti, during which many of the men lived ashore and formed relationships with native Polynesians, led many men to be less amenable to military discipline.

Mongols The Mongols, or Mongolic peoples, are a Central and Northern Asian (Inner Asia) ethno-linguistic group. Although the largest Mongolic group consists of the inhabitants of Mongolia, they also live as minorities across Northern Asia, including in Russia, China, and many of the former Soviet Union states. Mongolic peoples belonging to the Buryat ethnic group live predominantly in what is now the autonomous Republic of Buryatia, Russia. In China, they live mainly either in Inner Mongolia or, less commonly, in Xinjiang. Mongolic peoples are bound together by a common culture and language, a group of related tongues known as Mongolic languages.

History of Ireland (1169–1536) A tower house near Quin. The Normans consolidated their presence in Ireland by building hundreds of castles and towers such as this Trim Castle (1169-) is a major construction of this period The History of Ireland 1169–1536 covers the period from the arrival of the Cambro-Normans[1] to the reign of Henry VIII of England, who made himself King of Ireland. After the Norman invasion of 1171, Ireland was under an alternating level of control from Norman lords and the King of England. Previously, Ireland had seen intermittent warfare between provincial kingdoms over the position of High King.

Triumph of Hitler: Nazis Boycott Jewish Shops Just a week after the Enabling Act made Hitler dictator of Germany, a national boycott of Jewish shops and department stores was organized by Nazis under the direction of Propaganda Minister Joseph Goebbels. The boycott was claimed to be in reaction to unflattering newspaper stories appearing in Britain and America concerning Hitler's new regime. The Nazis assumed most journalists were either Jewish or sympathetic to Jews and thus they labeled the bad publicity as "atrocity propaganda" spread by "international Jewry." The boycott began at 10 a.m. on Saturday, April 1st, 1933, and lasted only a day. Nazi Brownshirts, the SA storm troopers, stood at entrances to Jewish shops, department stores, professional offices and various places of business. They held poster signs saying: "Germans, defend yourselves against the Jewish atrocity propaganda, buy only at German shops!"

Macdonald triad The Macdonald triad (also known as the triad of sociopathy or the homicidal triad) is a set of three behavioral characteristics that has been suggested, if all three or any combination of two, are present together, to be predictive of or associated with, later violent tendencies, particularly with relation to serial offenses. The triad was first proposed by psychiatrist J.M. Macdonald in "The Threat to Kill", a 1963 paper in the American Journal of Psychiatry.[1] Small-scale studies conducted by psychiatrists Daniel Hellman and Nathan Blackman, and then FBI agents John E. Douglas and Robert K. Ressler along with Dr. Ann Burgess, claimed substantial evidence for the association of these childhood patterns with later predator behavior.[2] Although it remains an influential and widely taught theory, subsequent research has generally not validated this line of thinking.[3][4]

Wreckage of the Essex Essex was an American whaler from Nantucket, Massachusetts, which was launched in 1799. In 1820, while at sea in the southern Pacific Ocean under the command of Captain George Pollard Jr., she was attacked and sunk by a sperm whale. Stranded thousands of miles from the coast of South America with little food and water, the 20-man crew was forced to make for land in the ship's surviving whaleboats. The men suffered severe dehydration, starvation, and exposure on the open ocean, and the survivors eventually resorted to eating the bodies of the crewmen who had died.

Republic of Genoa Geography[edit] When the Republic of Genoa was established in the early 11th century, it consisted of the city of Genoa and the surrounding areas. As the commerce of the city increased, so did the territory of the Republic. In 1015, the entirety of Liguria was part of the Republic of Genoa. After the First Crusade in 1098, Genoa gained settlements in Syria. Timeline of Irish history This is a timeline of Irish history, comprising important legal and territorial changes and political events in Ireland and its predecessor states. To read about the background to these events, see History of Ireland. See also the list of Lords and Kings of Ireland and Irish heads of state and the list of years in Ireland. Mesolithic and neolithic periods[edit] Bronze and Iron ages[edit] 1st century[edit]