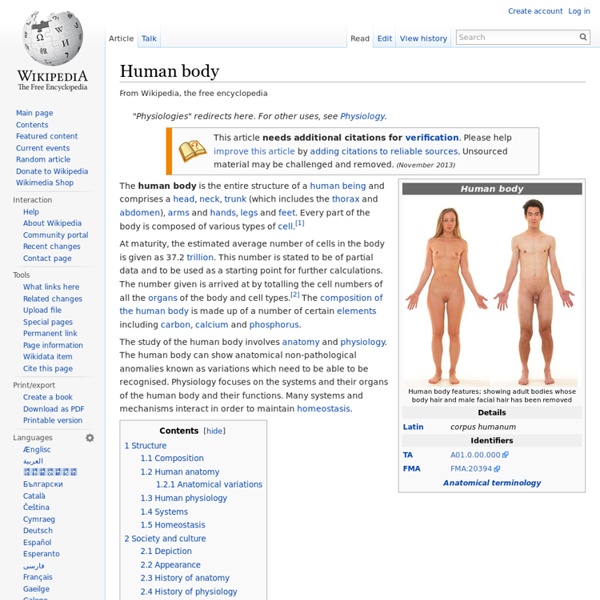 "Physiologies" redirects here. For other uses, see Physiology. The study of the human body involves anatomy and physiology. The human body can show anatomical non-pathological anomalies known as variations which need to be able to be recognised. Structure[edit] The human body has several body cavities the largest of which is the abdominopelvic cavity. Composition[edit] The main elements that compose the human body are shown from most abundant to least abundant. The average adult body contains between 5 and 5½ litres of blood and approximately 10 litres of interstitial fluid. The composition of the human body can be referred to in terms of its water content, elements content, tissue types or material types. The vast majority of cells in the human body are not human at all; rather they are of bacteria, archaea, and methanogens such as Methanobrevibacter smithii. The proportions of the elements of the body can be referred to in terms of the main elements, minor ones and trace elements.

Body proportions While there is significant variation in anatomical proportions between people, there are many references to body proportions that are intended to be canonical, either in art, measurement, or medicine. Similarly, in art, body proportions are the study of relation of human or animal body parts to each other and to the whole. These ratios are used in veristic depictions of the figure, and also become part of an aesthetic canon within a culture. Basics of human proportions[edit] Human proportions marked out in an illustration from a 20th century anatomy text-book. Different proportions in different people. It is important in figure drawing to draw the human figure in proportion. The proportions used in figure drawing are:[citation needed] Western ideal[edit] Leg-to-body ratio[edit] Another study using British and American participants, found "mid-ranging" leg-to-body ratios to be most ideal.[8] Muscle men and thin women[edit] Japanese ideal[edit] Leonardo da Vinci[edit] Additional images[edit]

Waivers (NHL) Waivers is a National Hockey League (NHL) labor management procedure by which an NHL team makes a professional ice hockey player’s contract and rights available to all other NHL teams. The term "waivers" refers to a concept wherein other NHL teams 'waive' any claim to a player designated for assignment in the AHL or designated for release. The process is typically referred to as 'being placed on waivers.' In the NHL, each player signs what is, or is a variation of, a standard NHL player's contract. The contract specifies that the team has exclusive rights to the player playing in the NHL. After a player has been designated for assignment, the other 29 NHL teams can put in a claim or waive their claim for that player. When a player clears waivers and is sent down and then is called up again, he does not have to clear waivers to be sent down again unless he has played ten games or has been "up" for 30 days.[5] The 2005 NHL-NHLPA collective bargaining agreement introduced re-entry waivers.

human brain anatomy Proportions for different heights Windows Phone 7: the complete guide After Windows Phone 7's grand unveiling at Barcelona's Mobile World Congress last month, Microsoft has circled back during GDC and its own MIX10 conference to fill in many of the holes in this story -- in particular, details around the app development ecosystem and how third parties can take full advantage of it have been focal points. Of course, it makes sense: a modern smartphone is only as good as its software catalog, and Redmond's clearly keen to show that it knows how very true that is. XNA -- the technology that underpins Zune games and a host of Xbox content -- figures prominently into the equation, but Silverlight is a huge, unavoidable component as well, making development for WP7 devices a starkly different experience for studios and independent code monkeys than in versions prior. The basic facts Windows Phone 7 is the successor to Microsoft's line of Windows Mobile phone operating systems. Gallery | 48 Photos Windows Phone 7 Series live gallery + See all 48 Hardware

National School Reform Faculty What is a Critical Friends Group® learning community? Critical Friends Group professional learning communities consist of approximately 8-12 educators who come together voluntarily at least once a month for about 2 hours. Group members are committed to improving their practice through collaborative learning. How did the idea of CFGTM communities develop? Create a particular variety of professional learning community Make teaching practice explicit and public by "talking about teaching" Help people involved in schools to work collaboratively in democratic, reflective communities (Bambino) Establish a foundation for sustained professional development based on a spirit of inquiry (Silva) Provide a context to understand our work with students, our relationships with peers, and our thoughts, assumptions, and beliefs about teaching and learning Help educators help each other turn theories into practice and standards into actual student learning Improve teaching and learning

Female Skeleton Anatomy Scanadu Raises $2M: “Check Your Body As Often As Your Email” Meet Scanadu, an innovative health tech startup I daresay you’ll be hearing a lot more from in the future. It’s not the easiest of tasks explaining what the company is building at this point, but let’s call it a personal, mobile, auto-diagnostics product – they refer to it as a Medical Tricorder. Founded in January 2011 by a team of entrepreneurs with diverse backgrounds, the roots of Scanadu actually go way back. One of the company’s founders, and its chief executive officer, is Walter De Brouwer – something of a legend here in Belgian entrepreneurial circles, and beyond. He says he had the basic idea for a personal health monitoring service back in 1999 when he was working at the renowned Starlab research institute, which he jump-started alongside MIT Media Lab founder Nicholas Negroponte. And from watching Star Trek. “Sci-fi stories are business plans in disguise,” De Brouwer tells me, referring to the invention of the mobile phone, which was inspired by the Star Trek communicator.

Male Skeleton Anatomy PSFK - the go-to source for new ideas and inspiration Unique Bodies Tutorial Richard Avedon Richard Avedon (May 15, 1923 – October 1, 2004) was an American fashion and portrait photographer. An obituary published in The New York Times said that "his fashion and portrait photographs helped define America's image of style, beauty and culture for the last half-century".[1] Early life and education[edit] Photography career[edit] In 1944, Avedon began working as an advertising photographer for a department store, but was quickly endorsed by Alexey Brodovitch, the art director for the fashion magazine Harper's Bazaar. In addition to his continuing fashion work, by the 1960s Avedon had turned his energies toward making studio portraits of civil rights workers, politicians and cultural dissidents of various stripes in an America fissured by discord and violence.[10] He began to branch out and photographed patients of mental hospitals, the Civil Rights Movement in 1963, protesters of the Vietnam War, and later the fall of the Berlin Wall. In the American West[edit] Exhibitions[edit]

Images Of Female Athletes The images below show an incredible variety of women, ranging in weight, height, race and proportion. What they all have in common is that they are professional athletes at their physical peak. The images, taken by photographer Howard Schatz for his 2002 book, Athlete, recently resurfaced, reminding us of the diversity of women's bodies. Schatz interviewed and photographed hundreds of athletes for the book, a project he says was inspired by his interest in human variation and the musculoskeletal system. "I was also interested in passion," he told the Huffington Post in a phone interview. During his interviews, Schatz noted very little difference between how the male and female athletes approached their sport. The only gender difference apparent to Schatz was how the athletes approached the issue of having children. Throughout the project, Schatz says he remained in awe of his subjects.