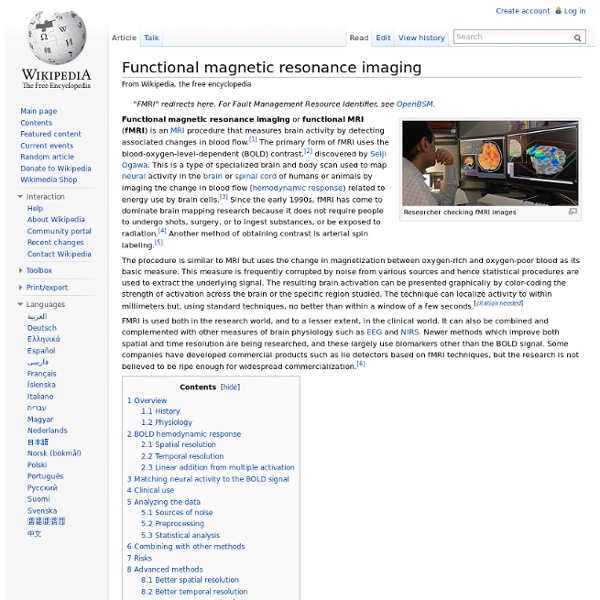 Researcher checking fMRI images Functional magnetic resonance imaging or functional MRI (fMRI) is a functional neuroimaging procedure using MRI technology that measures brain activity by detecting associated changes in blood flow.[1] This technique relies on the fact that cerebral blood flow and neuronal activation are coupled. When an area of the brain is in use, blood flow to that region also increases. The primary form of fMRI uses the Blood-oxygen-level dependent (BOLD) contrast,[2] discovered by Seiji Ogawa. The procedure is similar to MRI but uses the change in magnetization between oxygen-rich and oxygen-poor blood as its basic measure. FMRI is used both in the research world, and to a lesser extent, in the clinical world. Overview[edit] The fMRI concept builds on the earlier MRI scanning technology and the discovery of properties of oxygen-rich blood. History[edit] Three studies in 1992 were the first to explore using the BOLD contrast in humans. Physiology[edit]

Brain Atlas - Introduction The central nervous system (CNS) consists of the brain and the spinal cord, immersed in the cerebrospinal fluid (CSF). Weighing about 3 pounds (1.4 kilograms), the brain consists of three main structures: the cerebrum, the cerebellum and the brainstem. Cerebrum - divided into two hemispheres (left and right), each consists of four lobes (frontal, parietal, occipital and temporal). – closely packed neuron cell bodies form the grey matter of the brain. Cerebellum – responsible for psychomotor function, the cerebellum co-ordinates sensory input from the inner ear and the muscles to provide accurate control of position and movement. Brainstem – found at the base of the brain, it forms the link between the cerebral cortex, white matter and the spinal cord. Other important areas in the brain include the basal ganglia, thalamus, hypothalamus, ventricles, limbic system, and the reticular activating system. Basal Ganglia Thalamus and Hypothalamus Ventricles Limbic System Reticular Activating System Glia