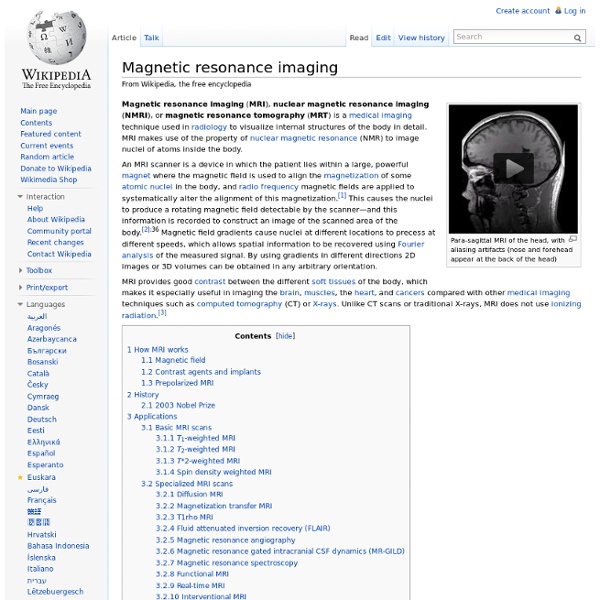 Magnetic resonance imaging (MRI), nuclear magnetic resonance imaging (NMRI), or magnetic resonance tomography (MRT) is a medical imaging technique used in radiology to investigate the anatomy and function of the body in both health and disease. MRI scanners use strong magnetic fields and radiowaves to form images of the body. The technique is widely used in hospitals for medical diagnosis, staging of disease and for follow-up without exposure to ionizing radiation. Introduction[edit] Neuroimaging[edit] MRI image of white matter tracts. MRI is the investigative tool of choice for neurological cancers as it is more sensitive than CT for small tumors and offers better visualization of the posterior fossa. Cardiovascular[edit] MR angiogram in congenital heart disease Cardiac MRI is complementary to other imaging techniques, such as echocardiography, cardiac CT and nuclear medicine. Musculoskeletal[edit] Liver and gastrointestinal MRI[edit] Functional MRI[edit] Oncology[edit] How MRI works[edit]

Proton therapy Proton therapy is a type of particle therapy which uses a beam of protons to irradiate diseased tissue, most often in the treatment of cancer. The chief advantage of proton therapy is the ability to more precisely localize the radiation dosage when compared with other types of external beam radiotherapy, though it is controversial whether this provides an overall advantage compared to other, less expensive treatments. Description[edit] In a typical treatment plan for proton therapy, the Spread Out Bragg Peak (SOBP, dashed blue line), is the therapeutic radiation distribution. The SOBP is the sum of several individual Bragg peaks (thin blue lines) at staggered depths. Proton therapy is a type of external beam radiotherapy using ionizing radiation. To treat tumors at greater depths, the proton accelerator must produce a beam with higher energy, typically given in eV or electron volts. History[edit] Application[edit] In the case of prostate cancer the issue is not so clear. Surgery[edit]

PathWest Services provided across South Metropolitan Health Service Our focus at SMHS is improving patient care and population health outcomes for our patients and the community. To this end, hospitals in the area are undergoing major changes to achieve an integrated approach across professions, sites and services, sharing knowledge and expertise, recognising and building on strengths. Our hospitals will be developing collaborative networks and partnerships, aligning resources, systems and processes across the health service to achieve our goals. Part of the reconfiguration includes changes to how our hospitals deliver their services: Rockingham and Armadale will become general hospitals Fremantle and Bentley will become specialist hospitals Fiona Stanley Hospital and the State Rehabilitation Service open Royal Perth Hospital will be redeveloped Shenton Park Campus will close Armadale Health Service Currently By 2014 Armadale Kelmscott Memorial Hospital Clinical Service Plan (PDF 1.8MB) Armadale Kelmscott Memorial Hospital Health Service website Currently

GP groups welcome Budget’s $1.2 billion investment in frontline healthcare AFTER the disappointment of last year’s Budget, GP and primary health care has enjoyed billion-dollar wins in the Rudd Government’s third Budget. The Federal Government has set aside $1.2 billion to improve GP and primary health care, including $355.2 million for a widespread rollout of the controversial GP super clinic program. The funding provides for 23 new dedicated GP super clinics plus upgrades to around 425 primary care facilities. The Government also unveiled the expected new practice nurse incentive payments. Medicare Locals – the new format for the much-debated primary health care organisations – were also revealed. Improving and coordinating after-hours care will be their first task, and they have been handed $126.3 million over the next four years to do so. The Budget also cements previous announcements on funding for increased GP training places. The major announcements have been broadly welcomed by GP groups.

Australia agrees compensation deal for Canberra homes 27 October 2014Last updated at 23:33 ET About 1,000 homes in Canberra are believed to be affected by asbestos The Australian government has agreed to help compensate people in Canberra whose asbestos-ridden houses will be demolished with a A$1bn (£546m) loan. The loan to the Australian Capital Territory comes after talks between ACT Chief Minister Katy Gallagher and Federal Employment Minister Eric Abetz. More than 1,000 Canberra homes affected by loose-fill asbestos insulation will be bought and demolished. Ms Gallagher said her government had reached "an in-principle agreement". "The Commonwealth will offer to provide the ACT with a A$1bn concessional loan towards the cost of the programme," she said. The chief minister also released a report by the Asbestos Response Taskforce on the long-term management of loose-fill asbestos insulation in Canberra homes that recommends the demolition of these homes as the only enduring solution. Asbestos has long been known as a serious health hazard

Health department "Health department" can also refer to a university health department. Health departments around the world[edit] See also[edit] Health minister National Health Service The official logo of the NHS in England. The four publicly funded health care systems in the countries of the United Kingdom are referred to as the National Health Service (NHS). The systems are primarily funded through central taxation. They provide a comprehensive range of health services, the vast majority of which are free at the point of use for people legally resident in the United Kingdom. The individual systems are: All services are often referred to as "the NHS", although only the English NHS is officially called the "National Health Service". History[edit] Leaflet concerning the launch of the NHS in England and Wales. In the UK Parliament at Westminster, the new health services were established through two Acts: From 1969 the National Health Service in Wales became a separate entity under the Secretary of State for Wales. Recent (2010 – present)[edit] Structure[edit] Funding and expenditures[edit] Expenditure for 2012/13 was projected to be: See also[edit] References[edit]