THC Gives Cancer Cells the Munchies Too : The Scientific Activist 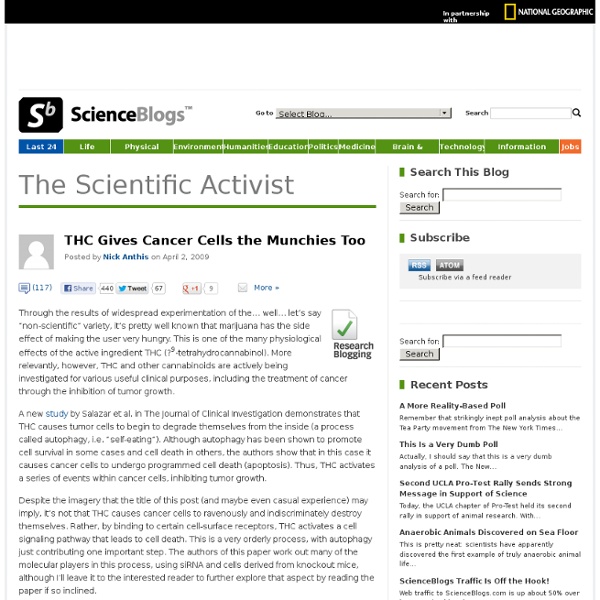 Through the results of widespread experimentation of the… well… let’s say “non-scientific” variety, it’s pretty well known that marijuana has the side effect of making the user very hungry. This is one of the many physiological effects of the active ingredient THC (?9-tetrahydrocannabinol). More relevantly, however, THC and other cannabinoids are actively being investigated for various useful clinical purposes, including the treatment of cancer through the inhibition of tumor growth. A new study by Salazar et al. in The Journal of Clinical Investigation demonstrates that THC causes tumor cells to begin to degrade themselves from the inside (a process called autophagy, i.e. Despite the imagery that the title of this post (and maybe even casual experience) may imply, it’s not that THC causes cancer cells to ravenously and indiscriminately destroy themselves. Mostly, this is interesting (to me) more for the big picture aspect and the implications for clinical medicine.

Nugshots - Professional Medical Marijuana Photography and Design What cannabis actually does to your brain - io9 Chances are they would've ended up brainless morons with or without the pot. It's quite frankly not strong enough of a narcotic to destroy one's life such as you describe. It's very dependent on the user's persona. @Tadashii: Are you also for alcohol and tobacco prohibition? Wow- Tadashii, pot is not meth or cocaine. Yes, its a chemical that can intoxicate and has been embraced by, and been the cause of some lazy folks, underachievers, and Grateful Dead fans not amounting to much. Pot is like anything else- tobacco, alcohol, vicodin, valium, caffeine, etc. Cannabis has great promise for any treatment that requires appetite stimulant (such as cancer, HIV, etc), and has also been found to act as an anti-inflammatory or nausea reliever, Don't just stamp marijuana "evil". Do you enjoy any caffeinated sodas, cigarettes, or the occasional alcoholic beverage? Yes I am against alcohol too and I agree that it's worse than pot.

Molecular mechanism found that controls marijuana-like substance in body | KurzweilAI - (Build 20100722150226) A newly discovered molecular mechanism helps control the amount and effectiveness of a substance that mimics an active ingredient in marijuana, but that is produced by the body’s own nerve cells. The results were reported in the latest Nature Neuroscience. The lead author on the study is William R. In previous papers, Stella and other scientists have noted that the body manufactures several cell signals called endocannabinoids that mimic the actions of marijuana-derived chemicals. Because cannabinoid signaling systems are common throughout the body and affect a variety of functions, therapies aimed at these systems might be more wide-ranging than simply a better substitute for medicinal marijuana. Controlling cannabinoid receptors to control pain, anxiety, and brain inflammation Earlier Stella’s group discovered a key endocannabinoid, called 2-AG, that carries a type of messaging between brain cells. 2-AG is also implicated in brain cell migration and brain tissue inflammation.

Israeli company grows medical marijuana which doesn't get you high Situated in an undisclosed location near Tzfat, northern Israel, is a government-approved medical marijuana plantation which was founded in 2004 by a retired biology teacher. Named Tikun Olam, the plantation has created a new cannabis strain which contains very low traces of tetrahydrocannabinol (THC), the main constituent in cannabis responsible for making people feel "stoned". By virtually eliminating THC in the new strain, Tikun Olam can now offer the drug's medicinal benefits to those patients who wish to keep a clear head. Marijuana contains over 60 constituents named cannabinoids and though THC is the most famous due to its psychoactive effects, another important constituent is cannabidiol (CBD). The new strain of marijuana created at Tikun Olam does just that. The promotional video below sheds more light on the Tikun Olam plantation. Source: Tikun-Olam , via: Reuters